Krita developers launched their own little StackExchange called Krita Q&A. Code-wise, they added an ability to import more than one file at a time, and enabled HiDPI support by default following an earlier fix by Dmitry Kazakov for setting a correct physical resolution to the canvas. Anna Medonosova carried on cleaning up various parts of UI (mostly layers-related).

Jehan Pagès continues working on the smart colorization feature in GIMP. The Bucket Fill tool where Smart Colorization is a ‘Fill by’ option, now allows easy color picking just like in painting tools, with Ctrl+click.

News on @GIMP_Official side: the bucket fill tool now allows easy color picking (similar to all painting tools with ctrl-click). This will be available for GIMP 2.10.10.
Here demonstrating with the new smart colorization (notice how the shape is not-closed). pic.twitter.com/rjf52iDDID

Most of Ell’s contributions to both GIMP and GEGL last week was about cleaning up the Bucket Fill tool code, making filling/clearing entire layers much faster, especially on huge images, and killing some lag when starting/finishing a stroke in large images.

He also introduced more performance improvements. This time, he changed the way layer groups are rendered. The old tile-by-tile approach was effectively making multi-threading unusable, so now GIMP uses bigger chunks instead. Additionally, he added a very fast allocator for small amounts of memory — basically, a replacement for allocating small buffers on the stack, which is not always safe. This made some blend modes less prone to crashing.

Øyvind Kolås continued his work towards making CMYK a first-class citizen in GEGL and babl. The babl library now supports more CMYK pixel formats (both 8-bit and 16-bit), and in GEGL, linear and bilinear samplers, as well as the Gaussian Blur operation now support CMYK data. He also introduced initial version of a metadata API for color spaces that should simplify overhead code.

The Inkscape team did the first episode of Inkscape Podcast, a multi-person video chat on the progress of Inkscape development.

The team called for community’s input on how users make use of Inkscape’s command line. Following that, they started adding more actions, including 90° CW/CCW rotation.

Jabier Arraiza also continues his work on multi-threaded canvas rendering. And the ‘Split Canvas; feature he worked on in November is now merged into the main development branch and has a few visual updates like a helper widget for swapping before/after views and toggling horizontal/vertical split modes. 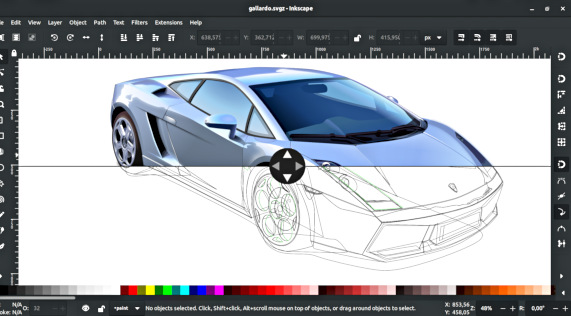 The darktable team made the first release candidate of upcoming v2.6.0 (they usually release around Winter holidays time). If you haven’t tracked their progress over the past year, some of the major changes are:

This is pretty much a preview, but it’s very close to the final version.

The Blender team finally announced the 2.80 beta. There is no actually tarball with ‘beta’ in its name. Rather, they called whatever they have a beta and continued publishing nightly builds. Pablo made a new video demonstrating major changes between 2.7x and 2.80.

Also, if you are just switching to 2.80 from 2.79, check out this guide by Metin Seven, where UI/UX changes are listed.

Blender 2.80 now defaults to left-click for selection, which is easier for newly arrived users and people who use tablets. People who already got used to right-click, can revert the change in the Preferences dialog. 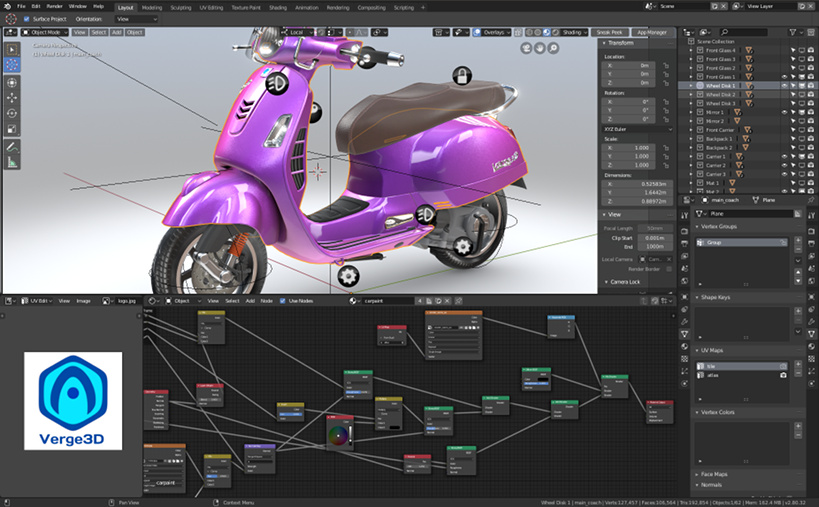 Arnold Couturier released SceneCity 1.3, a new version of the paid Blender add-on to procedurally generate cities. The new release introduces the concept of non-overlapping items, limited to buildings and roads for now, with more options to be added later. For the documentation and the full list of changes, see this page. 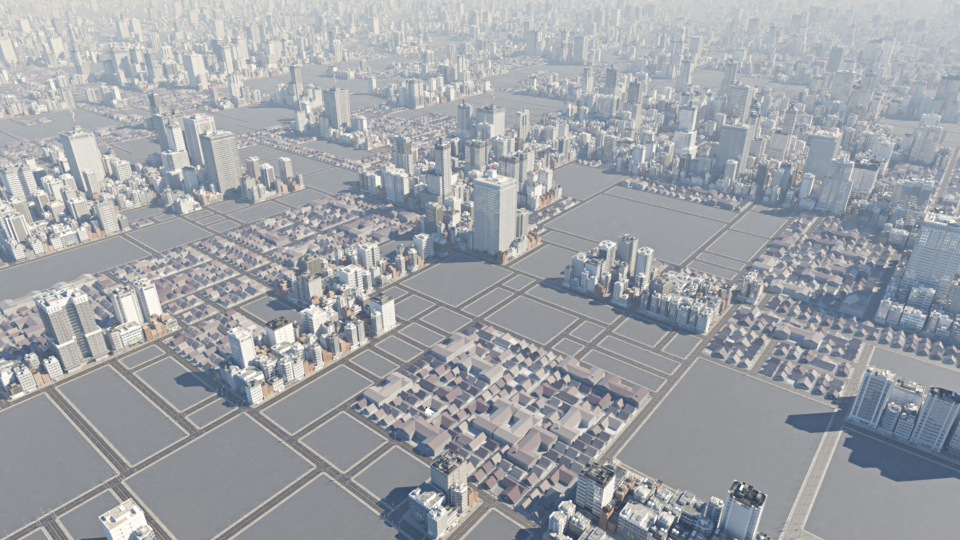 Wybren van Keulen released The Grove 7 beta add-on for generating trees. The new version supports Blender 2.80 beta and comes with lots of improvements like higher-quality wind animation, collections support, prune tool, and much more. Wybren also notes that he helped fixing Alembic support in Blender and contributed to the Code Quest (he encourages others to do so as well). There are no videos for new features yet, but this old demo should give you a general idea what the add-on is capable of:

Another project you might want checking out is Dust3D, another open source (MIT License) 3D modeling software that is now in v1.0 beta phase.

The project seems to be finetuned for game assets creation. probably the most interesting feature is modeling an object from image references in two planes, where the modeler “autocompletes” missing bits of the mesh, as demonstrated in the next video.

Yorik van Havre posted his monthly update on BIM development in FreeCAD. While we recommend reading the entire post, here is the gist of it.

While improving UX of the BIM workbench, Yorik started revising what dialogs should go to the sidebar and what dialogs should block the 3D view. Another UI change is newly added unit chooser in the top right corner of the main window (works just like the one in GIMP). 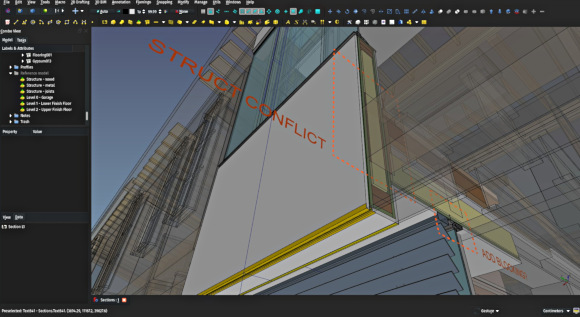 The program now also comes with a BIM tutorial. Essentially, FreeCAD reads a certain wiki page from the website that explains creating a BIM project step by step, so you can follow the tutorial while working on a project. The concept should be somewhat familiar to Inkscape users, where tutorials are SVG documents you can draw on.

On top of that, Yorik improved compatibility with Revit. You should now be able to create a project with FreeCAD, export it as IFC, and then open it correctly with Revit.

Also, a new video by Yorik now available, covering how expressions work in FreeCAD, and how you can bind any numerical value to just about anything else.

Tintwotin moved the discussion of his changes in VSE over to devtalk.blender.org, and some changes are now happening in the main development branch of Blender. William Reynish and Julian Eisel note, however, that a larger VSE rewrite still needs to happen to improve both performance and UX (a rewrite attempt was started a few years ago as a GSoC project, but the student failed to deliver). 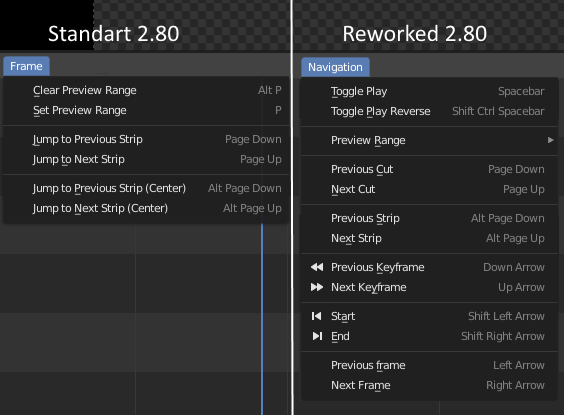 Dan Dennedy released a new version of MLT Framework, used by project like his very own Shotcut. The changes are pretty much what you already found in the latets release of Shotcut: several new filters and VA-API encoding, plus improved WebP support and bugfixes.

One very interesting release we missed last week is HISE 2.0.0 by Christoph Hart. It’s an open source framework for creating sample-based instruments on Windows, Linux, and macOS. In a nutshell, you can use this framework to create your own virtual instruments out of samples and use a variety of effects (HISE comes with a fast convolution engine and some FX).

The framework has a fast disk streaming playback engine and allows importing SFZ files. You can generate both VST/AU plug-ins and standalone applications. The new version comes with a new, faster modulation system, MPE support, lots of improvements and bugfixes.

Moses Sunny posted a video explainer how to set up studio lihgting when using Eevee in Blender 2.80.

The second part of that video by Grant focuses on baking multiple textures onto one map.

Pietro Chiovaro shared a timelapse of creating a render of an African village. Most of the time is spent of modeling and texturing the huts.

Nathan Lovato published a beginners’ tutorial on using code reference in Godot, integrated into the editor.

Another tutorial from Nathan covers the basics of using darktable.

New timelapse from grafikwork on drawing a carnivorous plant with Inkscape…

…and a new digital painting with Krita timelapse.

‘Isometropolis PD’ is a short animation by Louis du Mont — a collection of 3D scenes inspired by TV cop dramas. Some ‘making of’ is on BlenderArtists. Louis says he’s also working on an article that covers more details.

The concept of this robot was made “on the fly”. Started from a bad draft in a morning : spherical bot… Then added some ideas and functions… The arms were added last for instance. I guess it’s some sort of “probe droid” of some sort. The arms and legs can fit inside the main shell for “idle mode”. High poly model (for sure) : might go to low poly later for Sketchfab! Most of the pieces were rendered with modifiers (booleans, etc. : non-destructive workflow) : not much issue on the shading anyway, i guess! 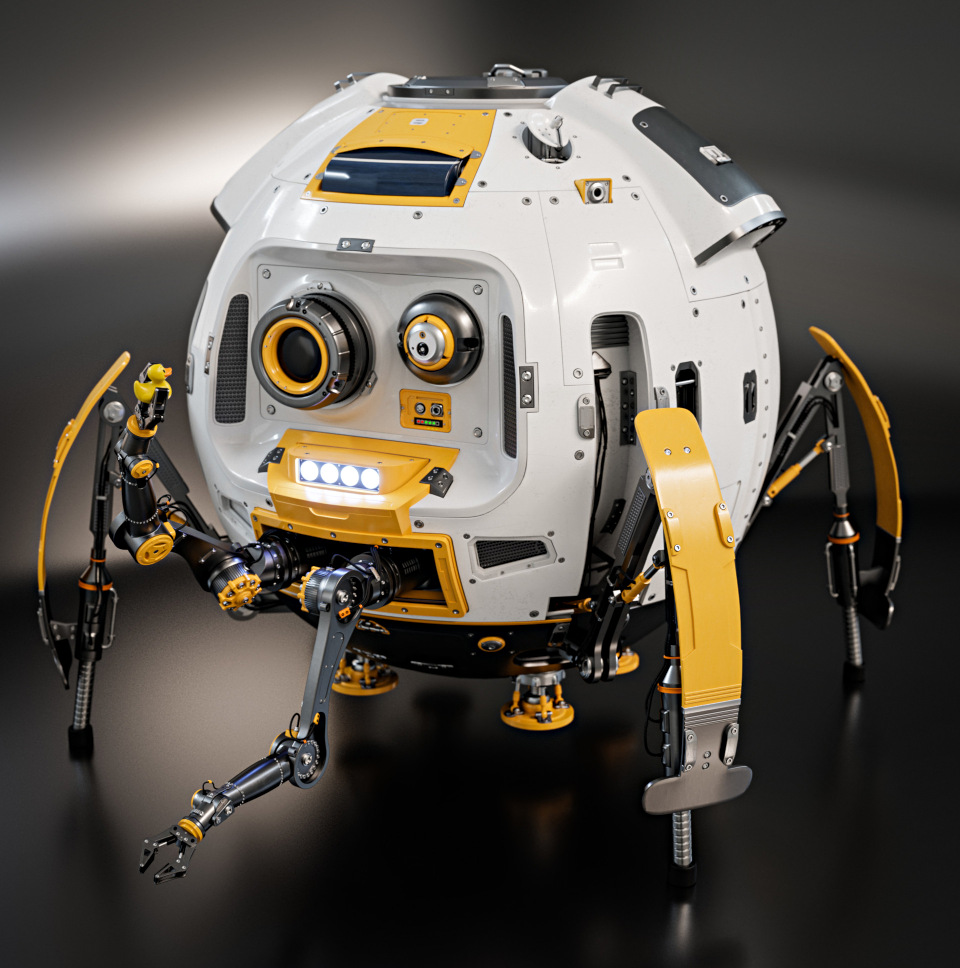 This is something that started by learning Retopoflow 2. I realized that it is pretty useful for making brand new shapes and meshes from the high poly geometry, and decided to try some different stuff with. Started with a sculpt of a whole fish. I used an old scientific drawing of a barracuda as a reference, but it deviated quite a bit beyond the general shape. 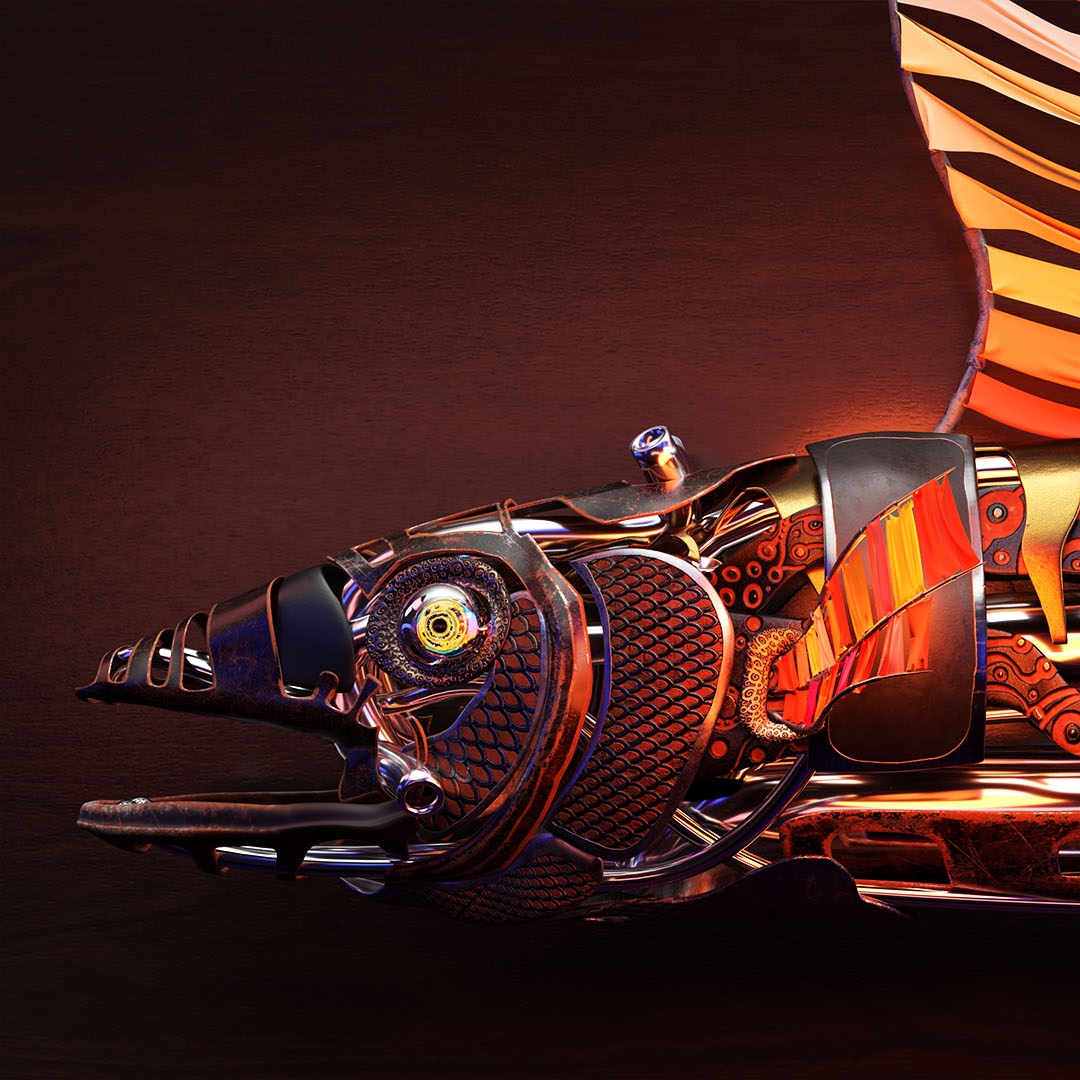 Lee Rosario posted renders of a new concept car, using techniques he learn from the Master Car Creation course on CG Masters. Lee has a thing for concept vehicles, do check out his other work.

Mclelun posted a test render with Eevee, and you know the kind of tests he does: absolutely gorgeous and finished works. 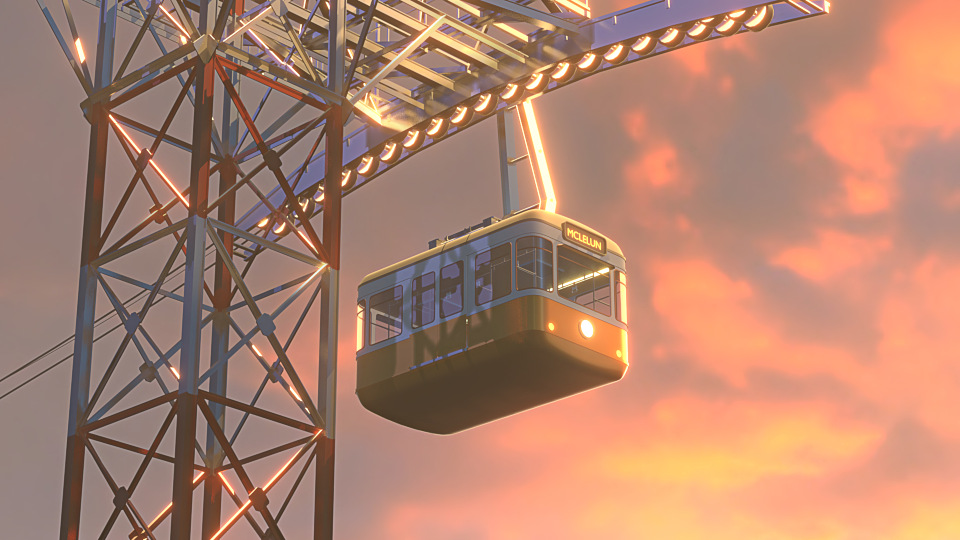 MIT-IBM Watson AI Lab published their new project called GANpaint. It’s essentially an online image editor streamlined to painting or removing several types of objects using a deep network. The paper is available for studying, and source code is up on GitHub.

And yes, apparently, GANs are all the rage now!