GIMP got a usability improvement from Ell, that deals with common cases like “Why can’t I paint on a layer?” and “Why can’t I move my layer?”. In other words, if you forgot that you locked a layer (or channel, or path) from changes, GIMP will now blink around the row of lock buttons, as well as around the status bar with a warning message, drawing your attention towards the area of interest.

Similarly, if you switched to moving selections, forgot about it, and now can’t move a layer, GIMP will blink around the row of buttons where you choose what you move: layers, selections, or paths.

Krita developers released a bugfix update as v4.1.7 . It also comes with HiDPI support enabled by default, improved Layer Styles user interface, and more. In development news, they now have the first HDR-enabled build of Krita working. For now, it’s only supported on Windows 10. 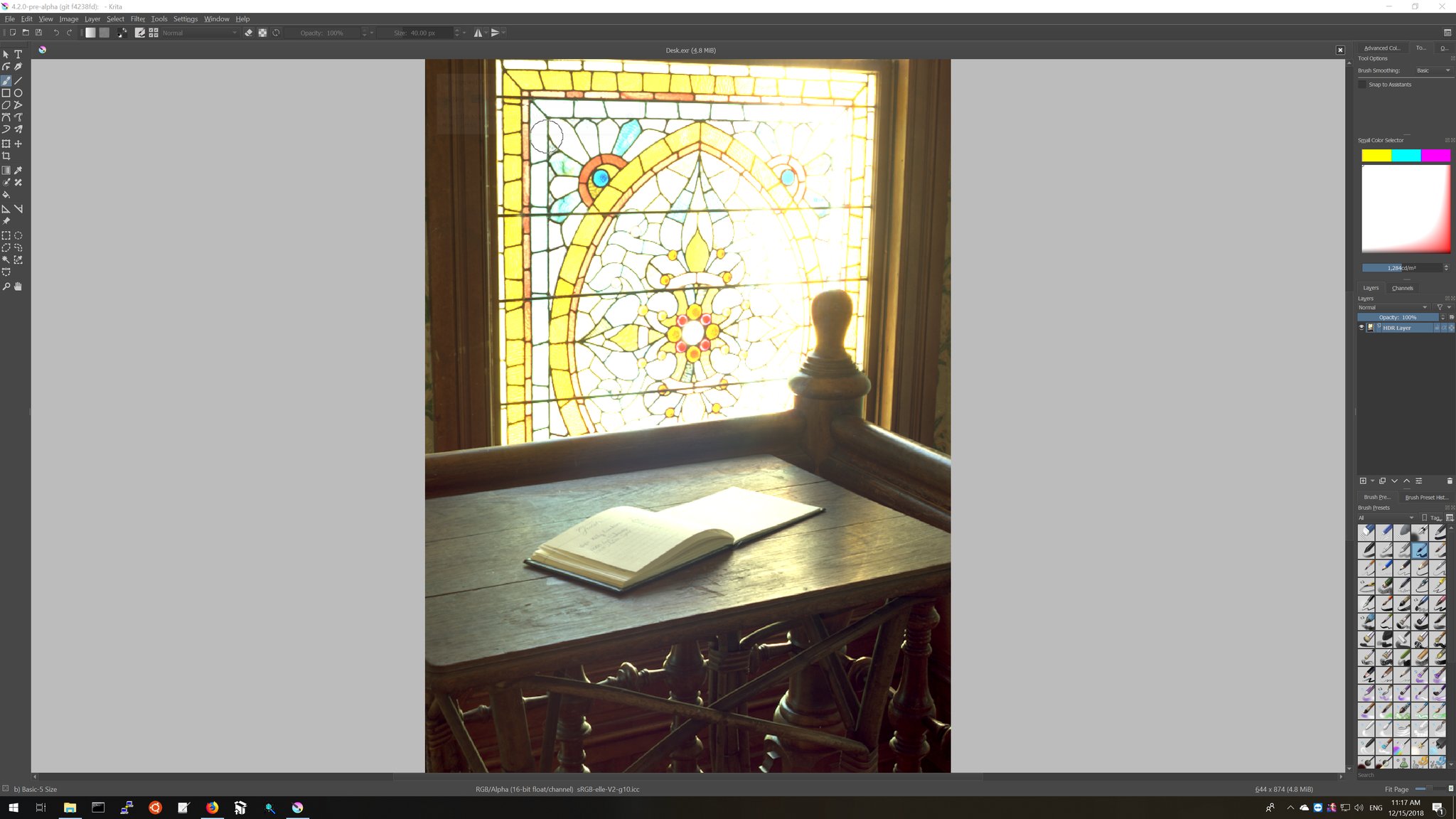 Aurélien also added a new experimental tool called tone equalizer, currently available in his own branch. Tone equalizer allows doing selective exposure adjustments in linear RGB for blacks, shadows, midtones, highlights, and whites. The current implementation is simplistic and unoptimized and takes quite a while to compute every change (using it on an i5 right now will probably frustrate you). This will be taken care of in due time. 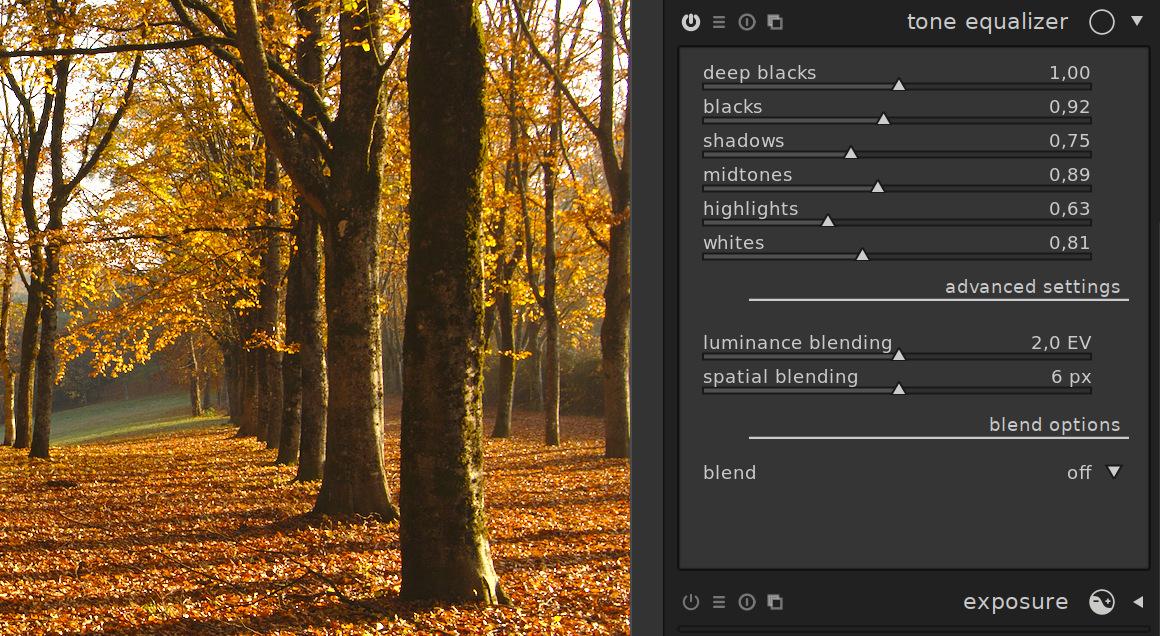 Ingo Weyrich contributed a bunch of improvements to LuminanceHDR : speed-ups for several tonemapping operators and fixes for working on large images (e.g. 100Mpx).

Andrea Ferrero introduced basic OCIO infrastructure to PhotoFlow . It’s now possible to insert the “Filmic Blender” OCIO transform between the output of the processing pipeline and the conversion to the display device. For more information, see the related thread at Pixls .

The Blender Development Fund welcomed the 1000th backer and is now at almost $23K a month from almost 1,100 supporters. 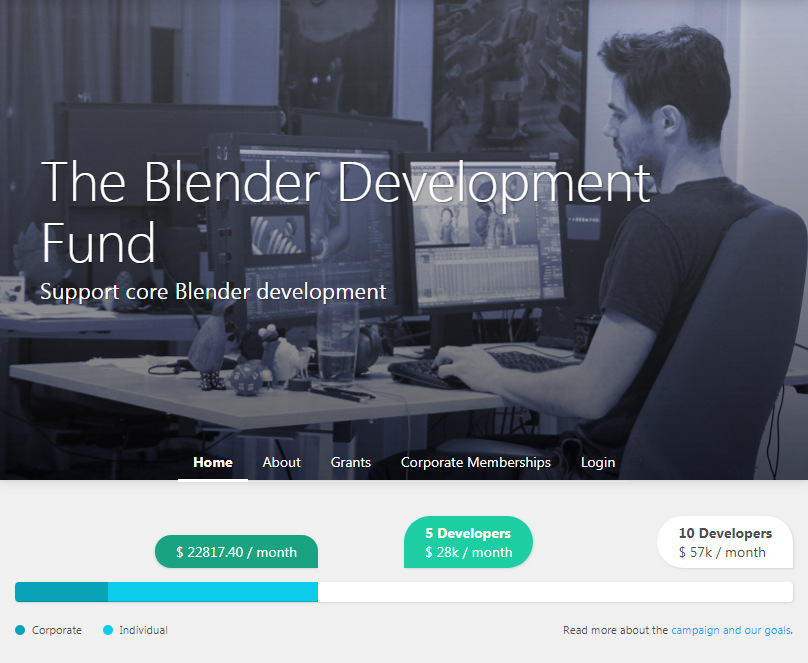 Grease Pencil in Blender got a new Curve tool that you might find quite useful for inking. Here is a quick demo cooked up by Antonio:

Gottfried Hofmann shot a video explaining some new features in 2.80: “visual alerts when changing a keyframed property, the hostname of a machine as metadata in rendered images, access to material settings from the node editor and a new primitive for the Grease Pencil: The Arc!”. ‏

Last but not least, during a discussion in the main developers' list regarding OpenGL in future versions of macOS, Ton Roosendaal pointed out that Vulkan is likely to be future for Blender.

Mikhail Rachinskiy released a new version of Commotion , a motion graphics add-on for Blender. This version features a proximity effector, a complete rework of the animation offset algorithm, new offset methods (Random and Multi-Offset by proximity), Animation Link/Copy (copying all properties for NLA strips),
Complete rework of the offset algorithm. Jimmy Gunawan did a long-ish review of Commotion just a few days ago.

User animate1978 on GitHub started a fork of Manuel Bastion Lab, called MB-Lab . The fork has had three releases so far, including changes such as:

Developers are welcome to join the project.

Marco and Joseph from 3D Wolf released a new version of their add-on called Real Camera that provides a high-level control over camera settings, operating on Aperture, Shutter Speed, and ISO. Version 2.2 allows animating values in real-time and features newly added Autoexposure button. Here is an older video of the project.

Reini Urban who works on LibreDWG and other projects like cperl and parrot is now on Patreon .

Last week started with somewhat blown out of proportions news that you can now vote for a port of Adobe Premiere for Linux, retaining proprietary status. Basically, Adobe said they won’t do it, but you can still give your vote to this idea if it’s important for you, and then maybe they’ll eventually consider it.

The idea of giving money to Adobe rather than supporting existing free/libre projects didn’t sit well with us, so we researched the topic of free/libre non-linear video editors sustainability and posted our results in a long read .

Meanwhile, Kdenlive 18.12 was released with bugfixes . The team also reminded that results of refactoring are expected in April 2019 and revealed ongoing work on UI redesign.

Blender’s Video Sequencer finally has a new maintainer , Richard Antalík. He already started working on internals, implementing frame prefetching . One test shows patched version of 2.79 going at full 25 fps for a FullHD ProRes video as opposed to 5 fps in the unpatched version of Blender.

And if you just can’t get enough of VSE extensions, Morevna Project reposted the add-ons list made by the VSE group on Facebook, and it looks like a very nearly complete one.

Jean-Baptiste Kempf (VideoLAN) announced the first release of dav1d , a reference AV1 decoder. The project now covers all of the specification and features of AV1, including 12-bit precision and chroma subsampling.

MyGimpTutorialChannel posted a new video that shows how to make dodging and burning with blending modes and painting on masks. As is usual for that channel, the video displays GIMP’s user interface in English and has no narration, but it’s not a timelapse, so it’s very easy to follow.

Davies Media Design explains in detail the use of the Text tool in GIMP.

This is, strictly speaking, not just an Inkscape tutorial. Patty Anne details her trip from vectorizing a bitmap logo with Inkscape to cutting it on vinyl to sticking the resulted sticker on a piece of jeans fabric with an iron.

New timelapse from grafikwork is up, showing how to draw a glass of wine, for your Santa doing B&E.

Blendernation posted an interesting article by Isabelle Grandguillot, covering the creation of stylized Jamie Fraser character from the Outlander series (Isabelle participated in the Outlander project). 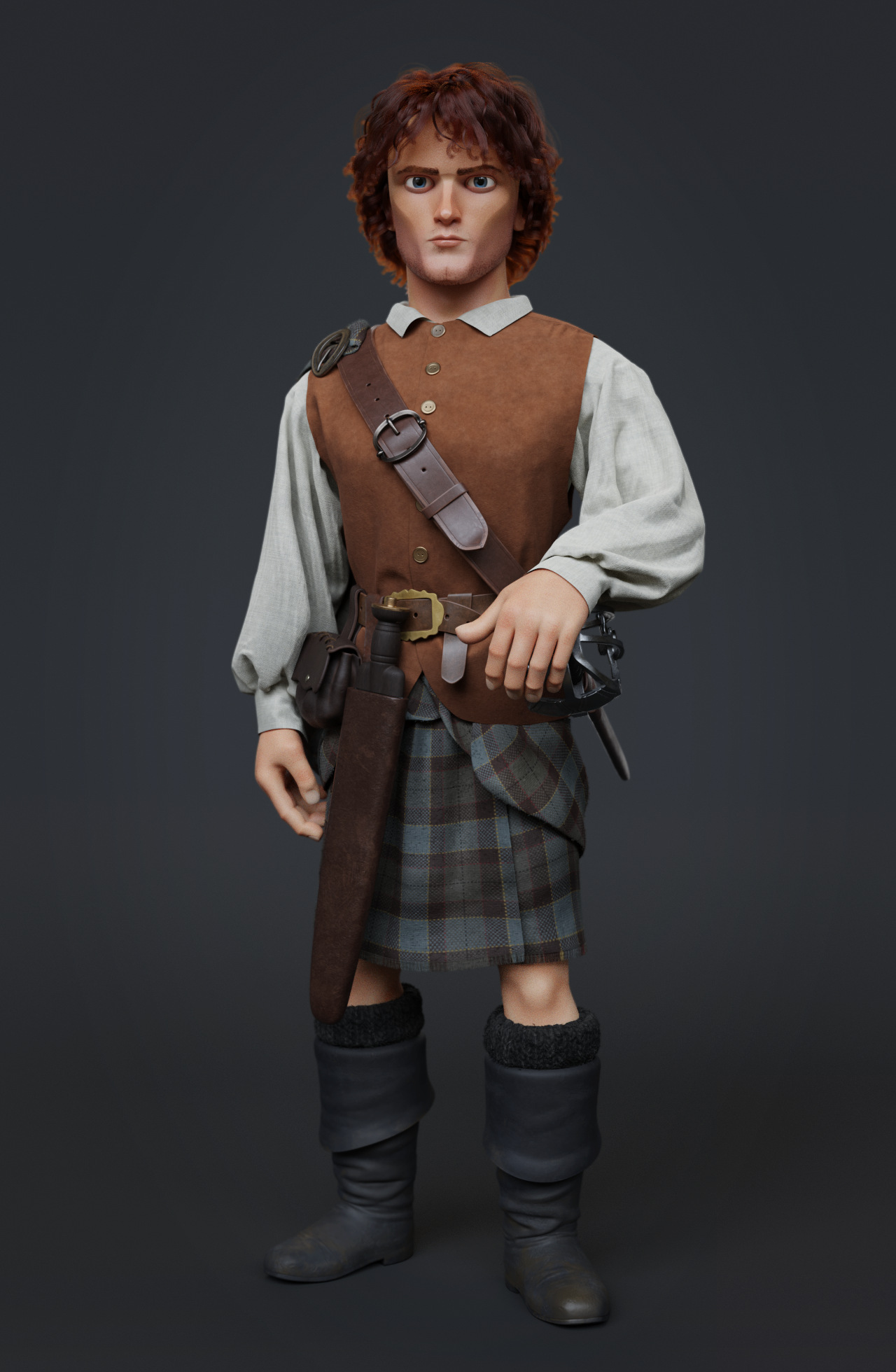 Paul Caggegi, who is on Patreon for funding his Blender tutorials , explains using the Grease Pencil tool while creating a character turnaround sheet.

GarageFarm.NET Academy posted a new Blender video about modeling a rusty lamp. It’s part of a step-by-step guide to creating an industrial-styled loft. 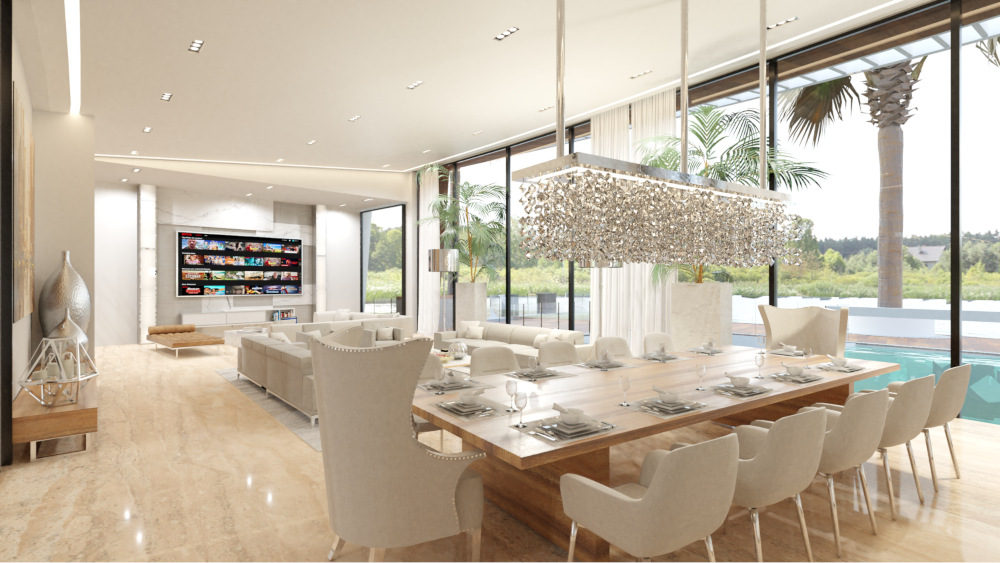 Nathan Lovato and his GDquest team continue publishing Godot tutorials. In the new one, Guilherme runs you through the party, enemy formation, and select system in their turn-based RPG .

Tux Designer posted a tutorial explaining how to reverse a video clip in Shotcut.

VFX Geek did a video overview of Blender being used in the production of feature films and animations such as Walking Dead, The Man in the High Castle, Hardcore Henry, Jurassic World: Fallen Kingdom, Terminator Genisys, Warcraft, Next Gen.

Vasyl Pidgirskiy posted a render of different seasons for one rural environment, with a short animation. 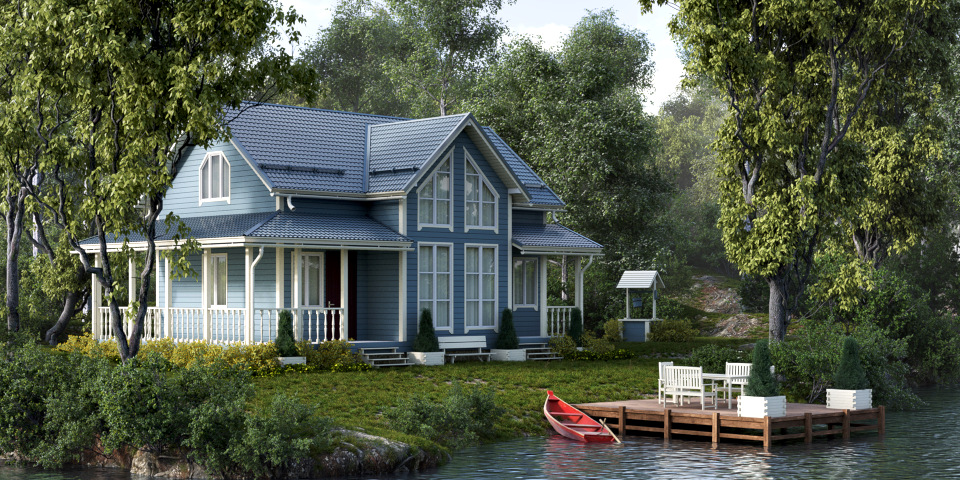 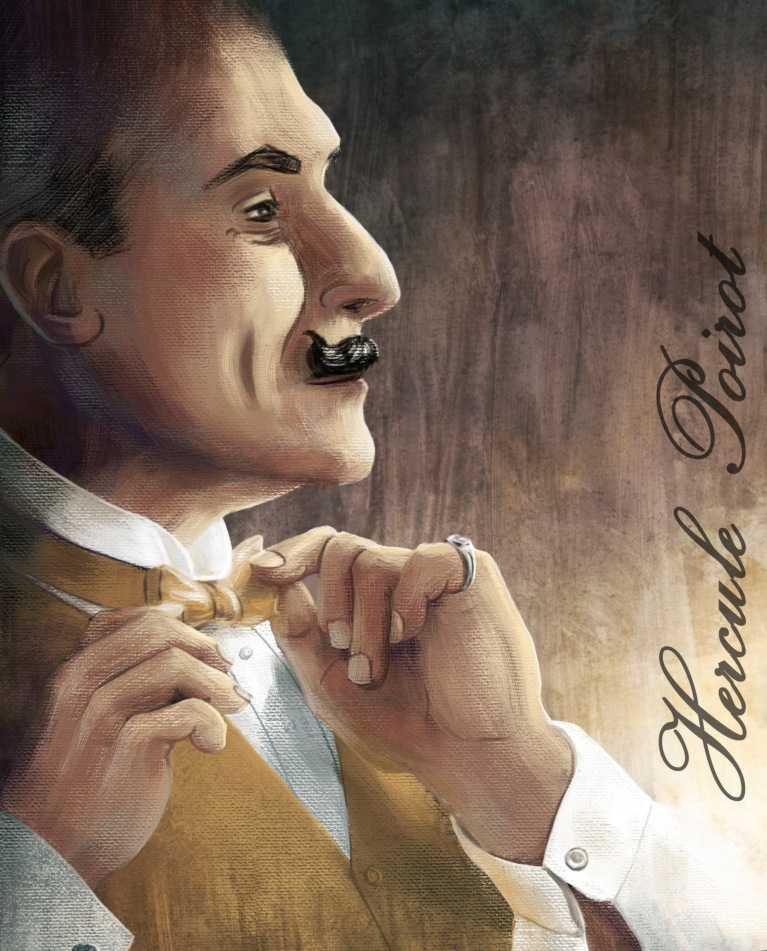 Ewerton Ruth uploaded his vision of Cthulhu, realized with Krita as well. 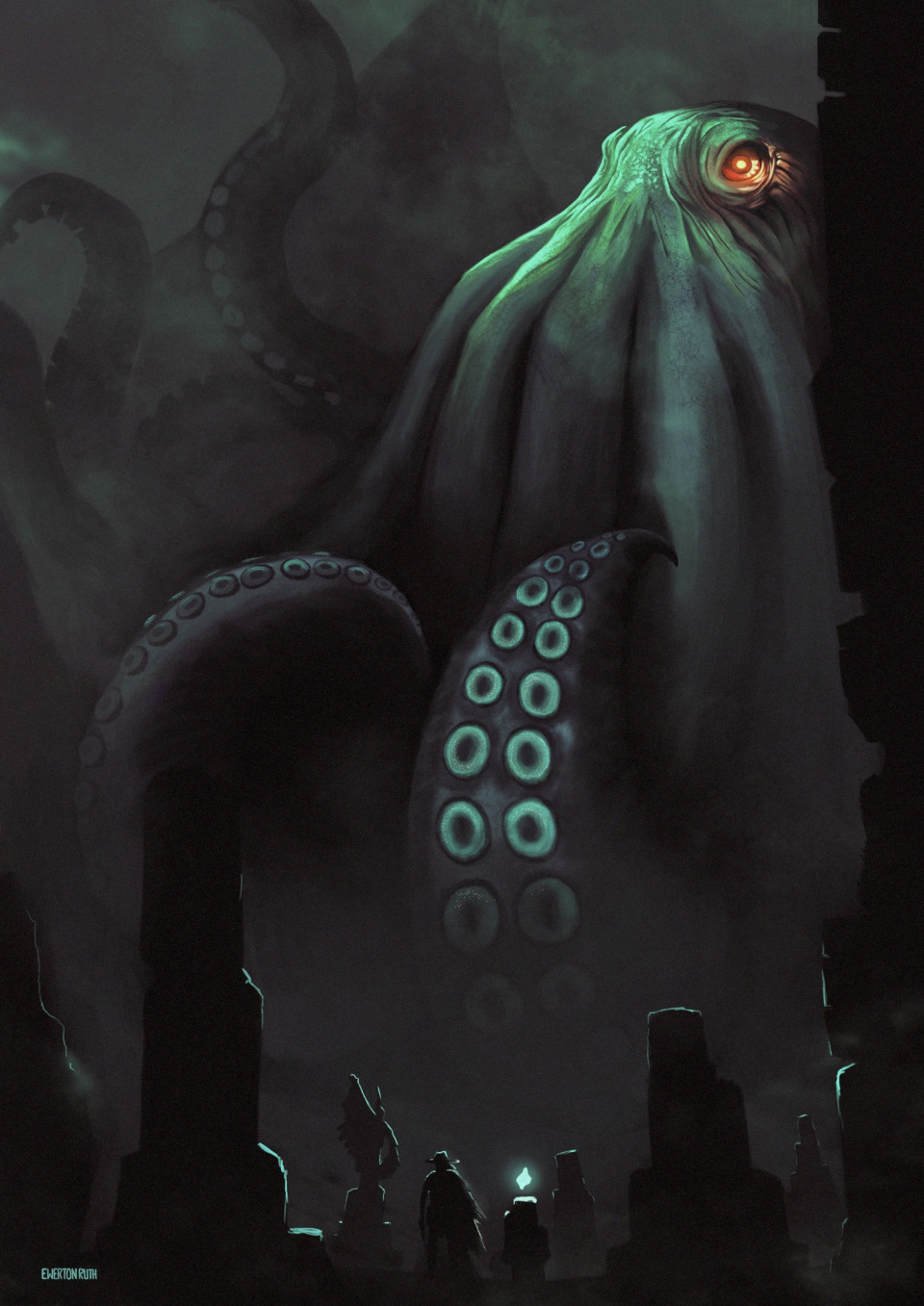