Highlights of the week: new releases of ArmorPaint, appleseed, and FFmpeg, a new version of GIMP and upcoming CMYK support in GEGL, interesting developments in Inkscape and Ardour, preview of the 3D track at Capitol du Libre 2018 conference in France.

The last week was somewhat quiet for Krita. Boudewijn was on vacation, and Dmitry was looking into HDR support in Krita. He ended up writing a little test Qt application that can show an HDR image in HDR on Windows.

The GIMP team finally resolved conflicting schedules and released v2.10.8. This time it’s more of a classical bugfix update, and even then they squeezed a few new features in. The Gradient tool now supports hard-edge gradient fills, and you can now view CIE xyY color readouts in the Color Picker’s Info window and in the Sample Points dock. Plus there have been some usability improvements. See the release announcement for more info.

One new feature that might hit the master branch soon (and then get merged for 2.10.10) is smart colorization based on the algorithm from G’MIC.

But to be completely honest, the most exciting changes are coming to babl and GEGL libraries right now. First of all, Ell is moving a lot of parallelization code from GIMP over to GEGL. In particular, he introduced centralized solution to distribute work across multiple threads instead of running local thread pools for every GEGL operation (filter) that supports auto-threading. In his own words:

There were a bunch of different pools all over the place, GIMP had its own thing, and plug-ins had nothing. Now it’s all in one place, for GEGL, GIMP’s core, and GIMP plug-ins, and it’s overall simpler. There’s even a small performance win.

And then there’s this coming directly from Øyvind Kolås, fresh off the #gegl channel on IRC:

I just got reasonable hacked up results for loading a CMYK JPEG with a CMYK ICC profile, then compositing a PNG on top leading to implicit conversion of the PNG to premultiplied CMYKA for handling in the over op — including either display in the GEGL UI or writing to PPM. So by now CMYK JPEG input/output is fully operational, and initial u8 CMYK TIFF loading exist as an initial hack.

Please note that there is no plan for getting this into GIMP just yet. From the conversation on IRC, it seems that more color management related work needs to be done first. And there’s still a lot of work on GIMP 3.0 to be done, which is a higher priority. But just a friendly reminder: Øyvind accepts reward for his work on babl/GEGL.

It feels so very good to say that there is also a lot of activity in the Inkscape project. While most work is plumbing, they still find the time for the fancy things. For instance, Jabier Arraiza is working on canvas splitting to compare full-color view with outlined view, where you can drag around the separation “curtain”. 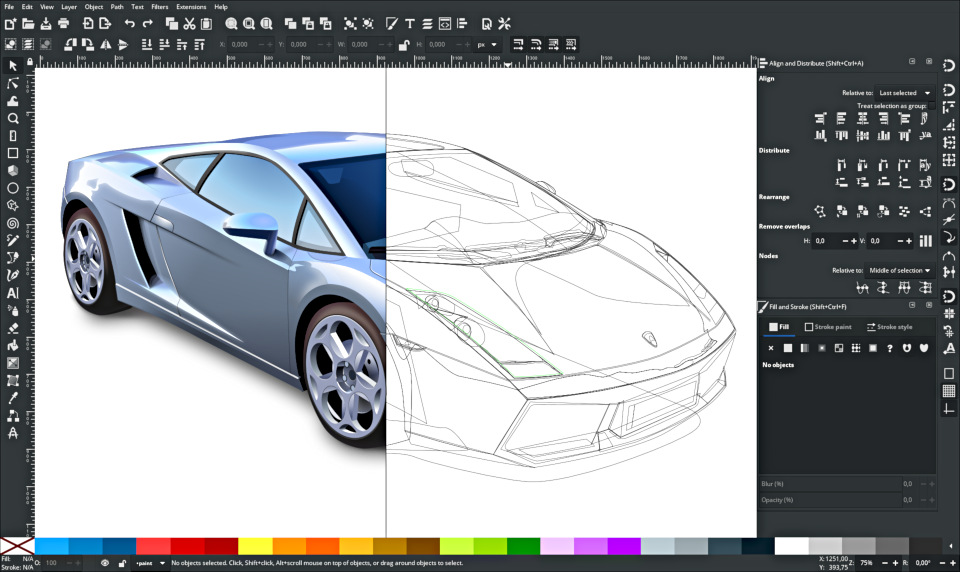 But wait, it’s only one little thing.

Tavmjong Bah rewrote the inkview application and added a preload option for when you have e.g. presentation slides in SVG. Thomas Holder is adding pinch zoom support to be used on trackpads/touchpads. And a really huge change is coming from Thomas Wiesner who is working on integrating Python interpreter into Inkscape.

The team now also provides a more detailed roadmap that suggests v1.0 release around May 2019.

After Blender, Krita, and GIMP (ACES RRT display filter in the master branch), filmic now found its way into darktable as a new filter written by Aurélien Pierre:

This new module is the log profile + tone curve bundled at once in order to perform a quick, efficient and powerful dynamic-range compression with contrast addition, allowing to remap the middle grey value to a specified value.

Another interesting new feature, added by Heiko Bauke, is blend mask feathering by a guided filter. For parametric and drawn masks, it allows refining mask edge using ligthness, contrast, and blur radius options. If you want technical details on the algorithm, see the original paper by Kaiming He. 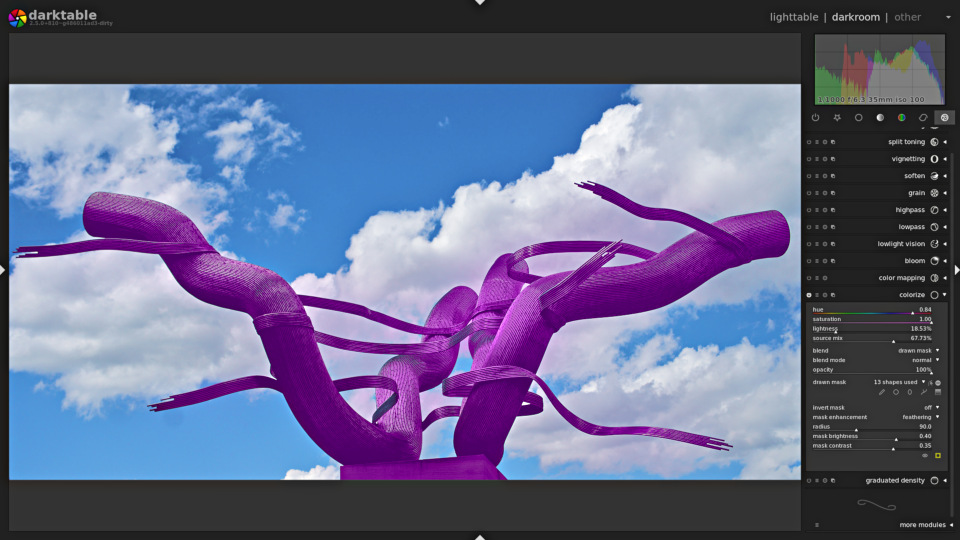 Interestingly, not long before that, Alberto Griggio started employing a guided filter in RawTherapee for computing masks in various filters: Shadows/Highlights, Haze Removal (new tool), and Color Toning. The latter also got a new method called “L_a_b* correction regions” which allows specifying various “regions” of the image with masks and correct for hue, saturation and lightness. 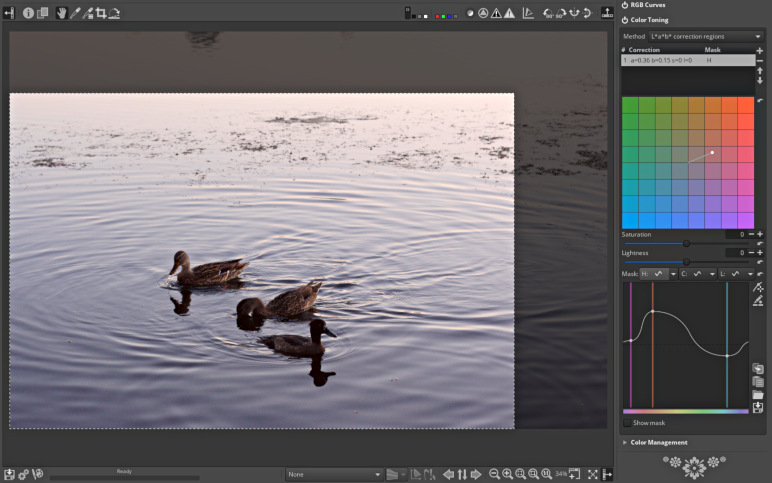 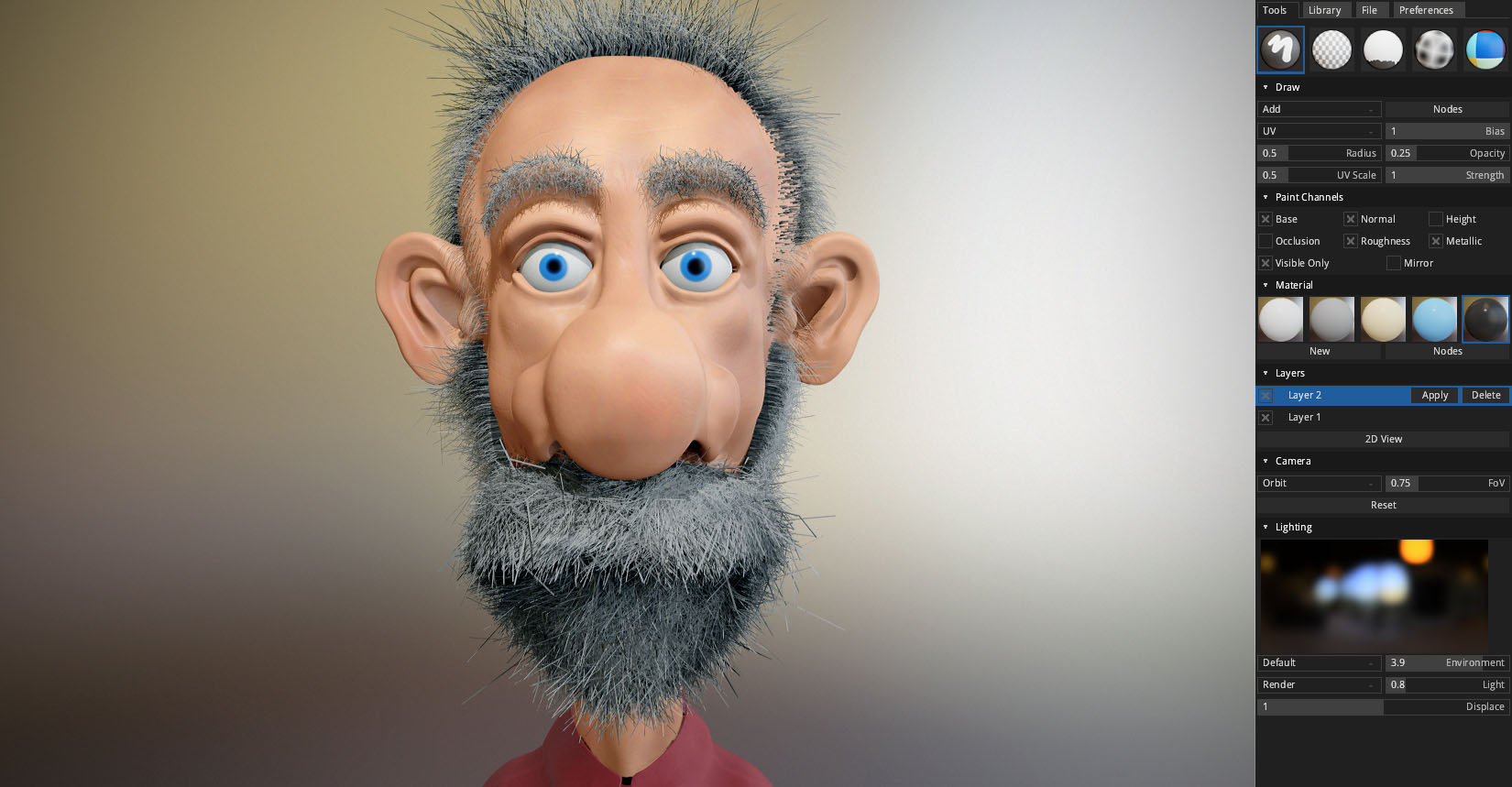 The developer still warns that ArmorPaint is beta software and is likely to contain major bugs. Binaries are available on Gumroad for €16. Source code is on GitHub.

Another major release was appleseed 2.0, an open source, physically-based global illumination rendering engine designed for animation and visual effects. For the full list of changes see the release announcement. 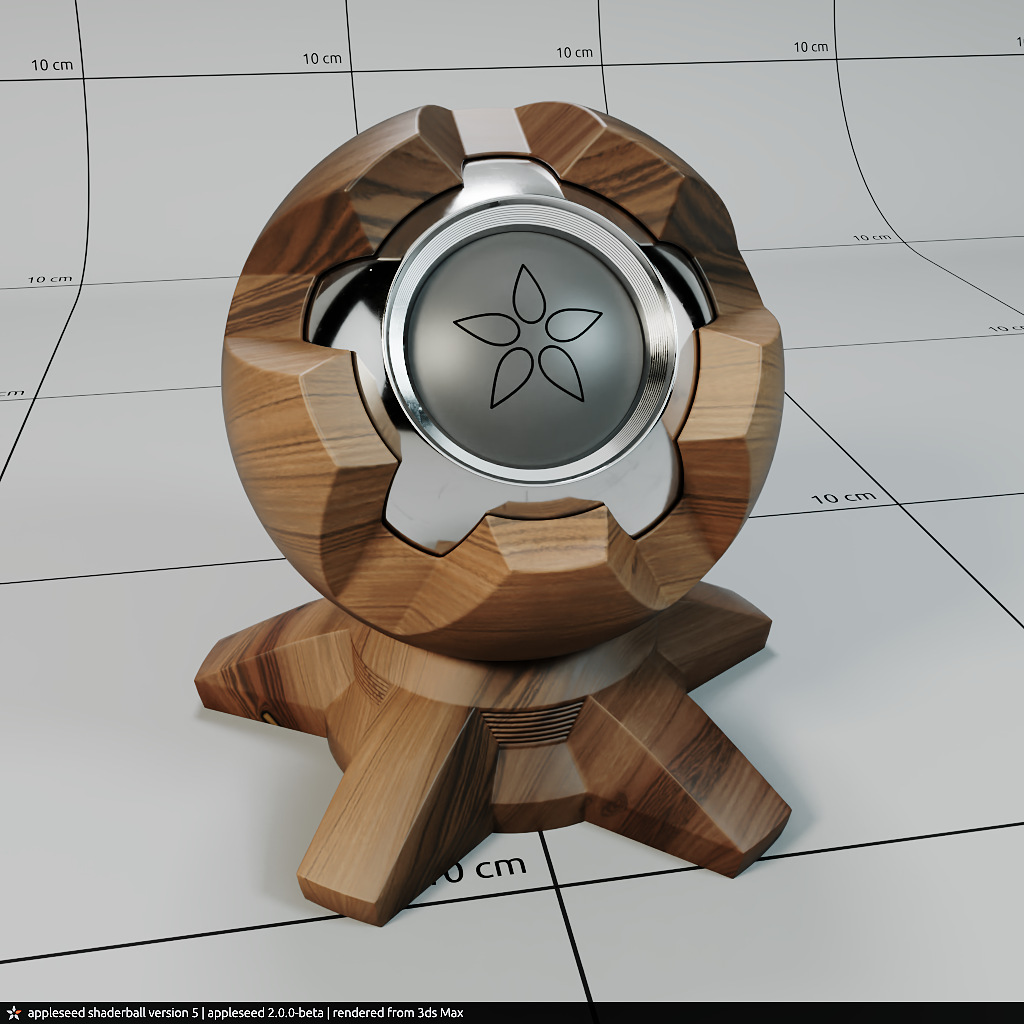 In addition, the team released blenderseed 1.0.0-beta for Blender 2.79 (Blender 2.8 is not yet supported). Following a major revamp of appleseed’s Pythin bindings, the team was able to provide interactive rendering within Blender via rendered preview viewport, AOV support, and increased stability and performance.

Quite coincidentally, Blender also got Embree support merged to the master branch. Even without GPU supoport (for now), a scene from Agent 327 featuring motion blur was rendered with Embree in 4m48s using 6GB of memory as opposed to 16m03s and 7GB without Embree.

Among other things, render and output settings are now separated in the Properties dock of Blender 2.8. BlenderDiplom demonstrates that:

Loïc Norgeot released the first public version of BakeMyScan, a Blender add-on for model optimization which is typically usable for photogrammetry and 3D scanning, but has more uses.

Tintwotin is teasing people with a Storyboarder importer for Blender VSE.

Import FCP X files from Storyboarder into #Blender3d #b3d #vse So far code is only POC(& only images and timings are imported) pic.twitter.com/iJnWeYwDuh

The second pre-release of Verge3D 2.9 is out with HDR rendering pipeline, post-processing effects, and improved support for Blender Eevee. 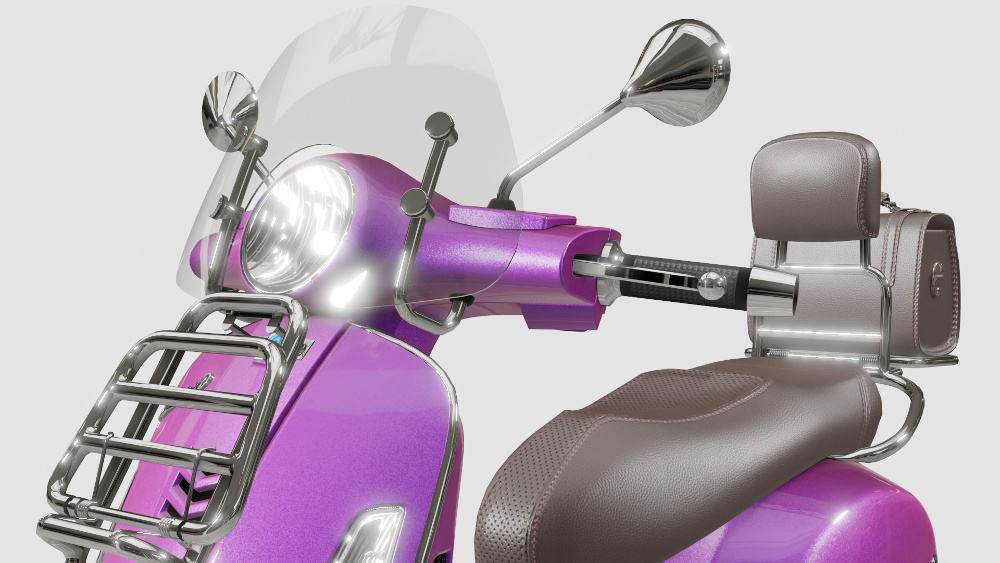 Simon Thommes released a new version of his procedural cloud system for Eevee. You can find it on BlenderArtists. 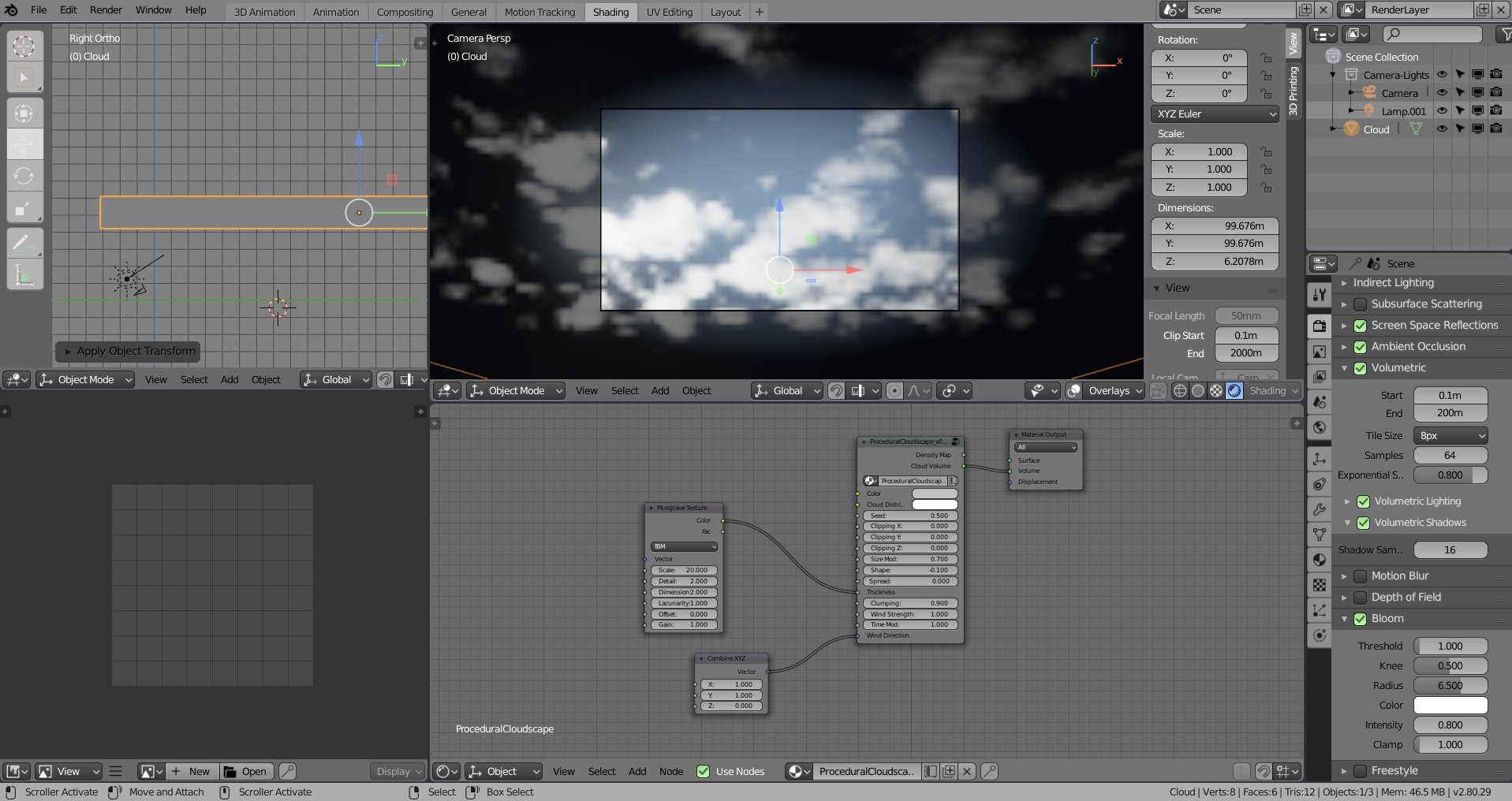 Fahad Hasan Pathik created a cryptomatte plug-in for Natron, available in his fork of the official natron-plugins repository on GitHub.

Among puzzling news of the week, the closing of the Manuel Bastioni Lab project really stands out. Almost a week prior to that, Manuel announced that he needed financial support to keep going with the project. However he doesn’t seem to have had planned a media campaign and merely made one Facebook and one Twitter post. The overall reaction of the community and see on Facebook and on BlenderArtists seems to be that he should have planned the announcement better and waited (a lot) longer.

Speaking of AV1, here is Nathan Egge from Mozilla diving into the depths of this video compression format at the Mile High Video Workshop in Denver recently.

We also spoke to Alexandru Băluț of Pitivi regarding v1.0 release plans. He clarified that the official roadmap is somewhat outdated, and Pitivi 1.0 is unlikely to be ready by December because of several major issues that remain to be fixed. They do hope to release the last 1.0 RC in December though.

It would be nice to give weekly updates on such a major project as Ardour, but here is the deal. Early on, Paul Davis (lead developer of the project) warned the community that v6.0 will be a major rewrite with probably not many user-visible changes. This is turning out to be a more or less correct prediction.

While the team does push changes that affect workflow and UI, a crazy amount of changes is under-the-hood work. So there can be two-three weeks of “boring” yet important internal changes, then some user-visible activity, then another month of “boredom”. These past few weeks, we’ve been lucky to see some “excitement” next to a lot of “boring” patches. 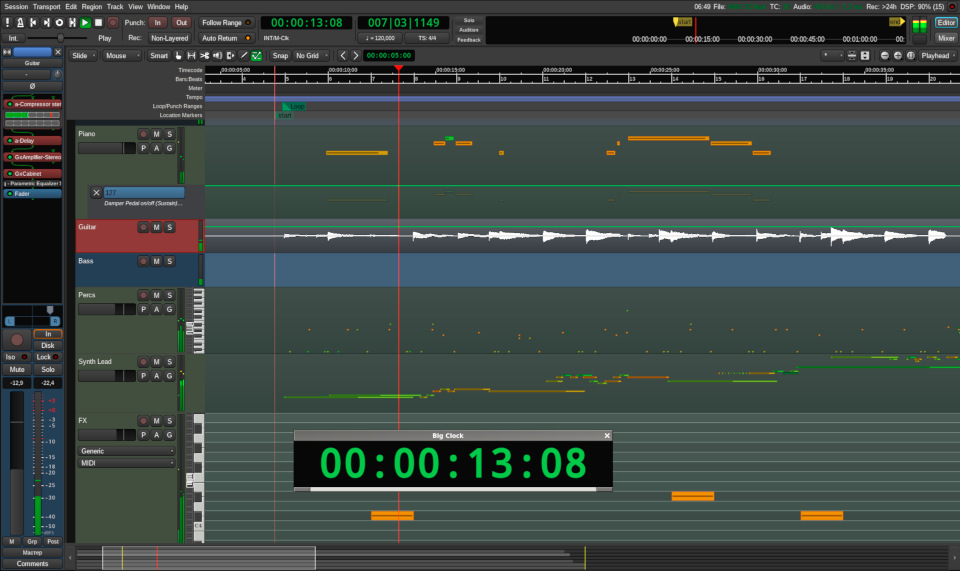 On the user-visible side, Paul has been doing some work on the beatbox again, taking place in the ‘newbbgui’ branch. The idea is to give users a familiar (step sequencer) environment for making grooves. If you know Mulab, you might find Ardour’s implementation somewhat similar (but definitely not a rip-off). Right now, this subproject is raw to an extreme, you should not expect it to be usable at all, which is why I’m only mentioning the branch for precision’s sake.

Meanwhile, Robin Gareus made it possible to record directly into FLAC (configurable) and introduced convolution DSP based on zita-conviolver to Ardour’s core, topping it with an example convolution Lua script with a hardcoded impulse response file. Finally, Damien Zammit did some more work on ProTools importing.

On the plumbing level, patches continue to arrive from Ben Loftis of Mixbus fame. Of all Ardour’s past and present partners, Harrison Consoles have proven to be the most resilient one.

The annual Capitole du Libre 2018 conference is taking place on Novemvber 17 and 18 in Toulouse, France. David Revoy is giving a talk again, but this time it’s not related to Krita at all. Instead, he will be talking about keeping FLOSS projects healthy and taking care of communication, website, repository, and community. 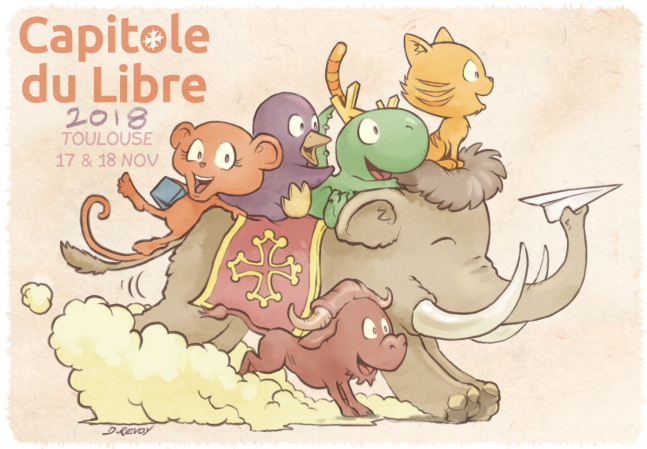 Apart from that, there will be a 3D track at the conference:

Olivier Amrein announced that he will be giving workshops and talk about Blender 2.8 in Shenzhen (China) during the China High Tech Fair, on November 14-18.

Check out this Twitter thread started by Craid David Jones where he explains how to use a simple noise procedural set to random for a brush mask to create a nice soft pencil in Blender 3D. 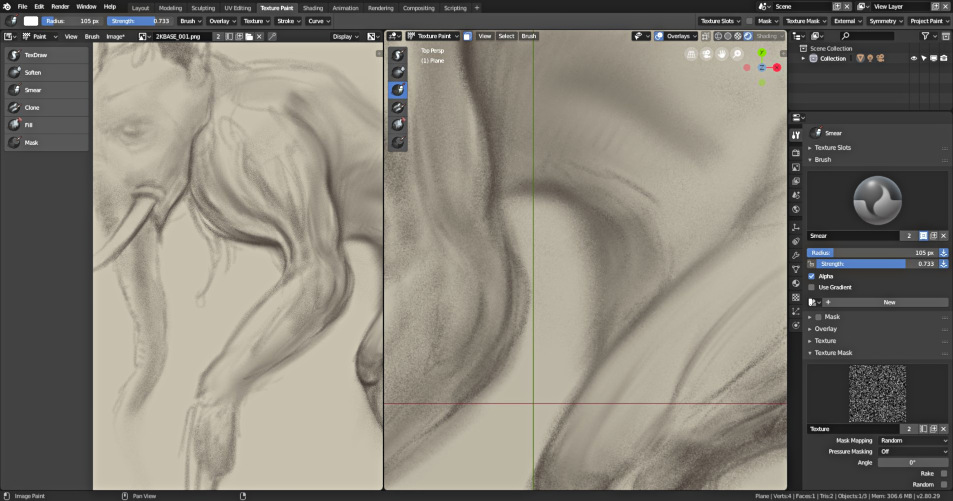 New Godot tutorial from Nathan Lovato: how to detect gestures and horizontal/vertical swipes.

Timothée Giet announced that the second edition of his book in French “Dessin et peinture numérique avec Krita” is now available in stores. The content has been updated to match the feature set of Krita 4.1.1. 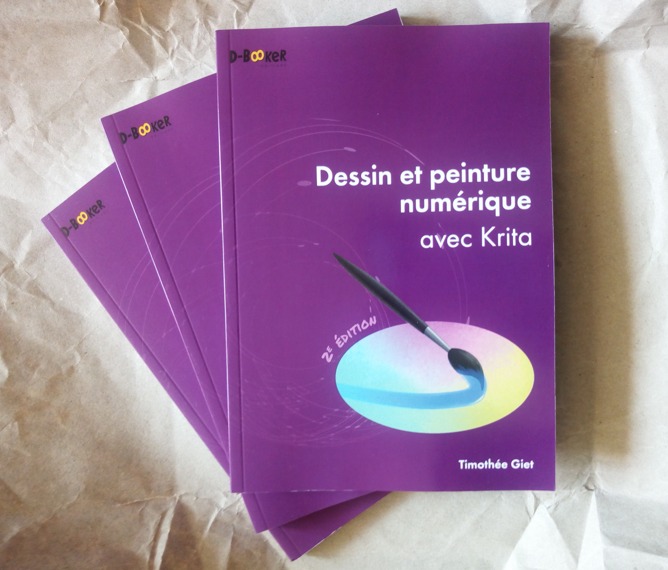 Blender user 曹連澤 created fan art remake of Hilda season 1 opening, with Grease Pencil. He claims he used another program for coloring and editing though. Even so…

Rafael Mendes took the 3rd place in the Epic Pumpkin Contest at CG Cookie with his Blender project: 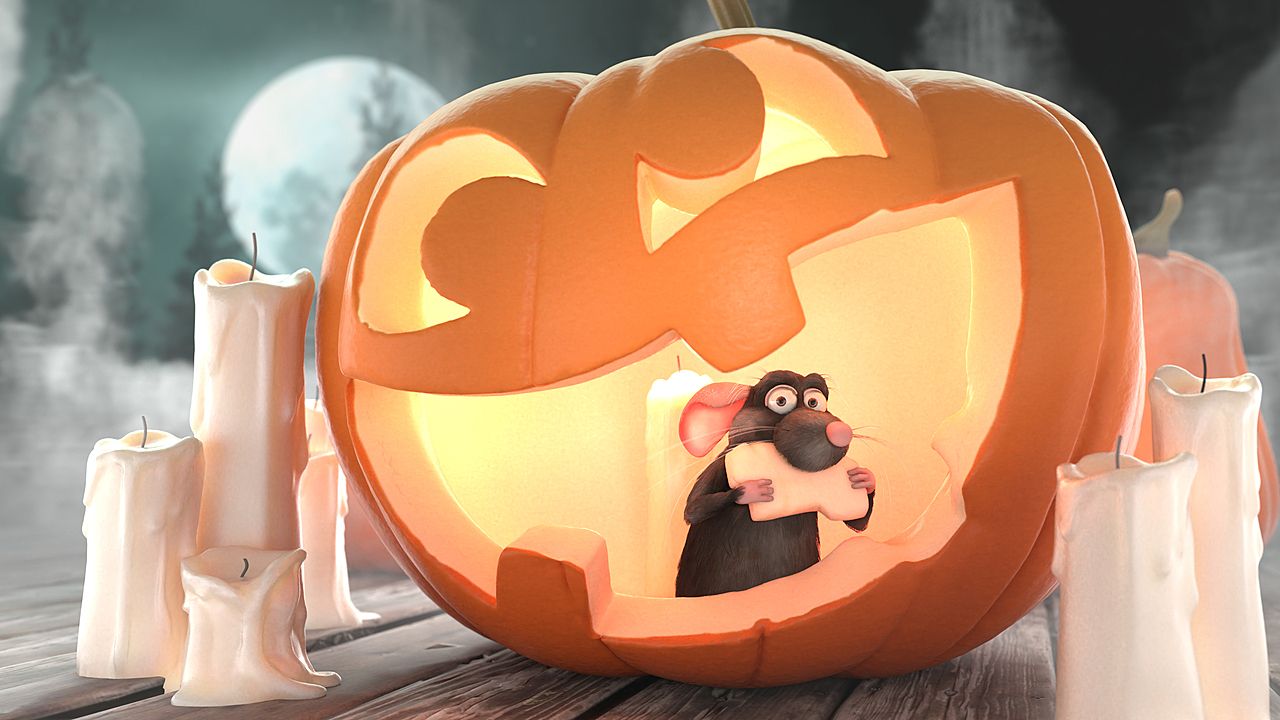 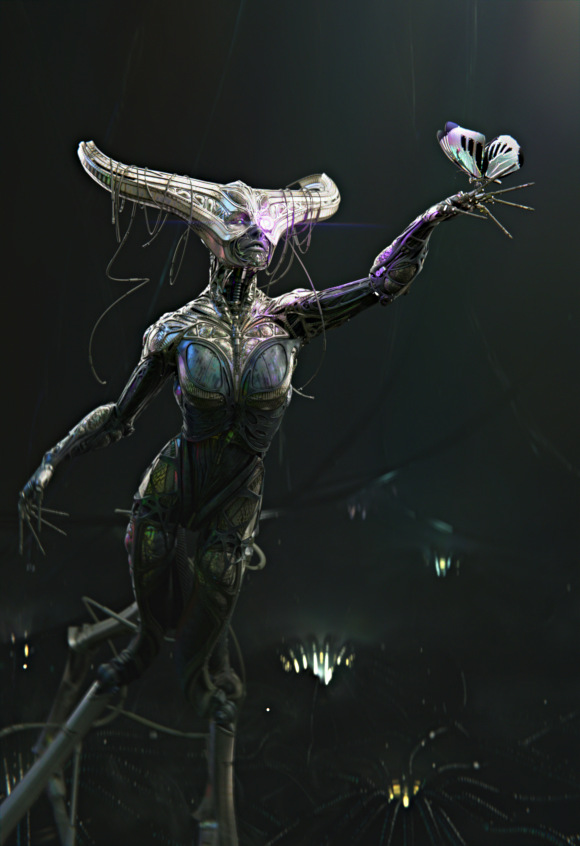 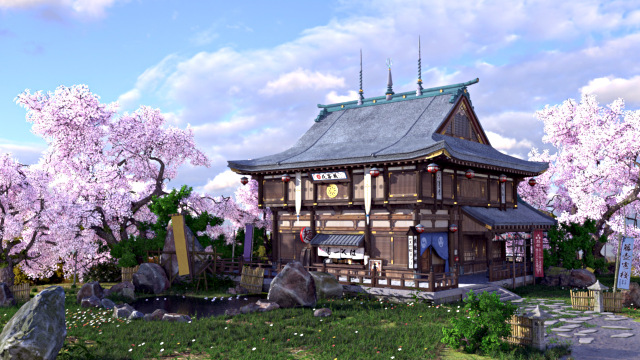 New work called “Virtual Reality” by Pablo Dobarro, based on a design by Hiroto Ikeuchi. 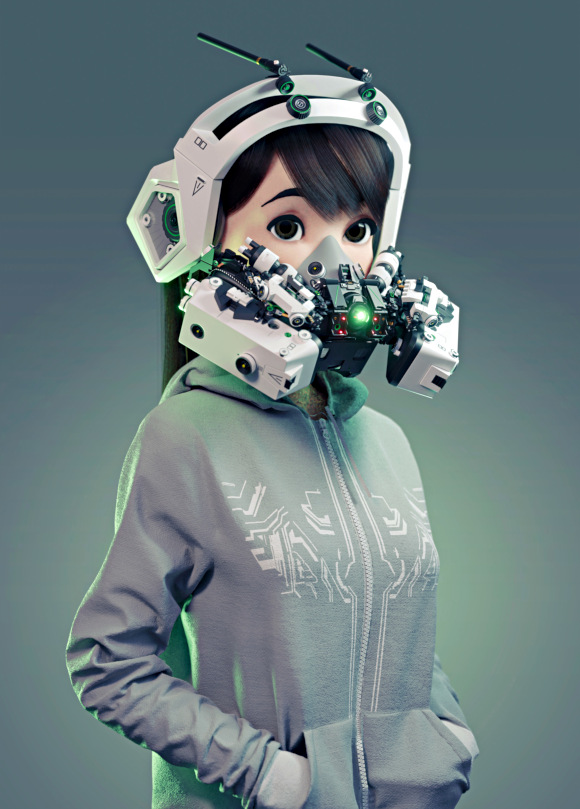 Something new and, let’s face it, very cute from Louis du Mont.

Alyssa May posted some tentacles galore made with Krita and the video of the process. 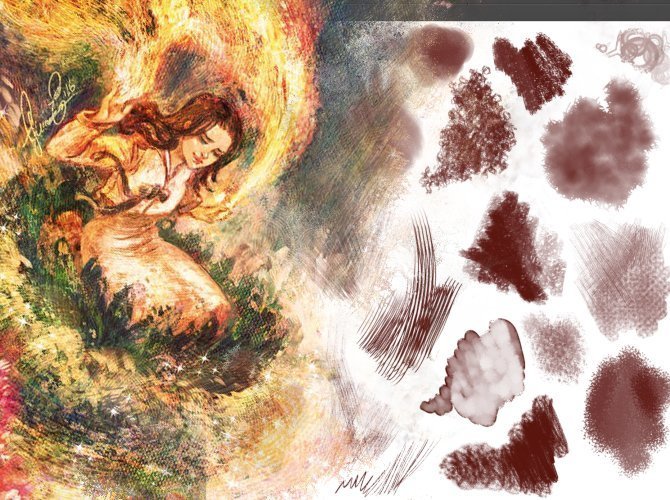 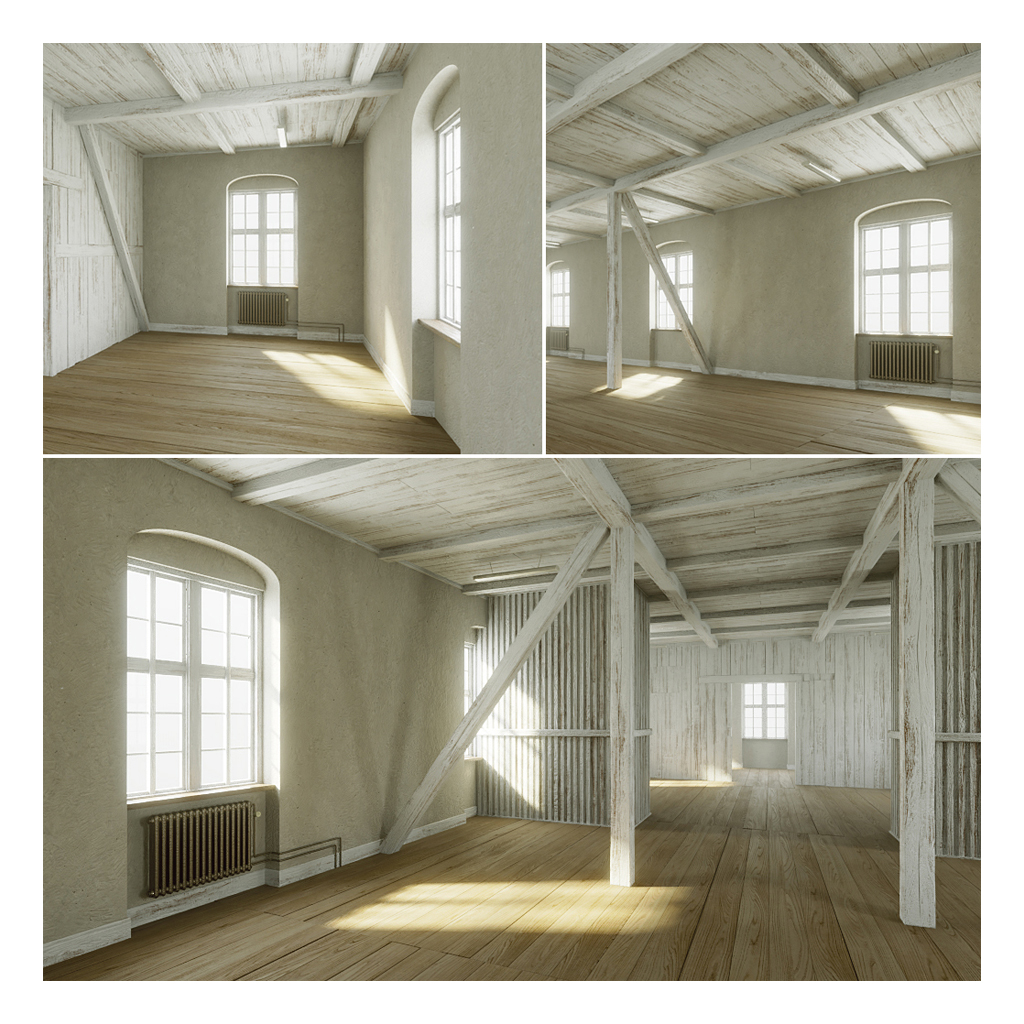