Is it feasible to create graphics for a really popular social network game with free software? Two years and 4,000,000 users later the answer seems obvious.

All the Flappy Bird nonsense aside, the question stands: just  how good is free software for production of games that engage millions of users?

We already told you about the making of Sokoban Garden mobile game in the past, but what about games for social networks? Any cultural shifts yet?

Yesterday, Paul Geraskin, a 3D artist at Playkot, a St. Petersburg (Russia) based game development company, revealed in a Blendernation story that graphics for SuperCity, a popular online game, was created with Blender, Krita, and GIMP. Paul kindly agreed to elaborate on his experience with free software for a special coverage by LGW.

Hi Paul! First of all, is Playkot a large team at all?

We are a team of 60 at the moment, and we keep rapidly growing.

How much popular is SuperCity today?

The game has been out for 2 years now, and it’s quite well-known on Russian social networks such as VKontakte where it has ca. 4 mln. users. We’ve just released its version for Facebook which is, in fact, the reason we started all this PR activity :)

There are 7 games in your portfolio, and only for this one the graphics was (knowingly) created with Blender, Krita, and GIMP. So that’s your first significant project where free software was used on such a large scale?

Yes, so far it’s the only project where free software has been used. I’ve extensively used it for two years, and all I can say is that it gets the job done. 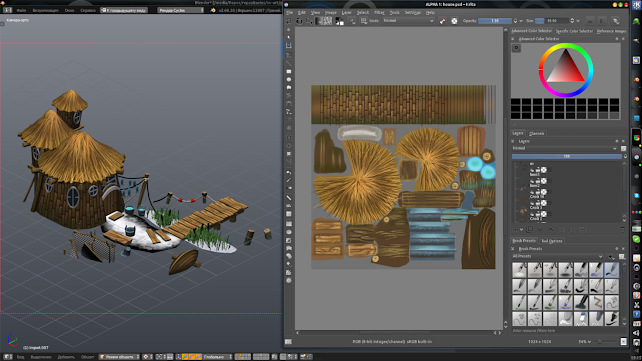 Nevertheless I would strongly advice to use some commercial software that will certainly improve your results: ZBrush, 3D Coat (works on Linux!).

Looking beyond the price tag, how much difference does it make for you to rely on free-as-in-speech software?

E.g. I wrote two scripts for Blender, TextureAtlas and UVUtility, both are parts of the vanilla Blender package now (since v2.68). As for Krita, I had to keep asking the team behind it for a whole year to have critical bugs fixed (over 50 of them!) and some new important features implemented.

What kind of features are you referring to?

You mentioned in the announcement that you rely on Krita for painting textures now. Do you have any other uses for it? Concept art maybe?

No, I only use it for texturing right now. In fact, I’m still the only person using Krita in the team, but I hope this is changing soon.

And you stopped using GIMP at all?

Well, no. I still make stuff with it. First I render different parts of an object in Cycles, then I use GIMP for assembling one final image from them. GIMP is quite convenient for this kind of work.

Did you have any problems integrating Blender into an existing workflow?

There have been no problems with Blender whatsoever. It’s day one production tool in the SuperCity game project. And it is quite awesome for making sprite-based games. Besides, Cycles is very intuitive and easy to use. But you really, really need something like NVidia GTX to make it work fast enough. 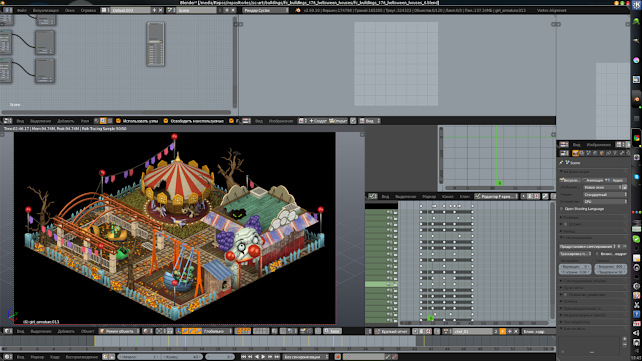 You mentioned before that you had moved production to Cycles as soon as it was out. What made you do this? After all, Cycles wasn’t exactly feature complete back then.

Cycles is just so much more powerful for what I do. I love how much crisper textures look, and how much better the lighting is when rendered with Cycles, as opposed to Blender Internal.

In your experience, does the learning of new tools such as Blender and Krita justify itself?

Frankly, it has never crossed my mind to even make this sort of an evaluation before.

Do you think free software could be more widely adopted in the company?

In Playkot, it doesn’t really matter if you use commercial non-free or open source software, just as long as you get the job done. By the way, we are always looking for talented game developers, designers, artists etc. Get in touch with us, if you are interested. You can mail us at hr@playkot.com.

That makes a lot of sense to me. I mean, if you want to see your favorite app mature and improve, it stands to reason that you ought to donate. E.g. if you earned $5K thanks to that free software, shelling out mere $100 to support the developers should be no biggie. I donate every year, usually around Xmas time, after updating commercial software that I still use.