A lot of work on GIMP last week was plumbing but it was the important kind of plumbing. File plugins now begin to use new program-wide API for saving metadata instead of using their own code that has variations and inconsistencies among themselves.

Krita got a new gradient editor: 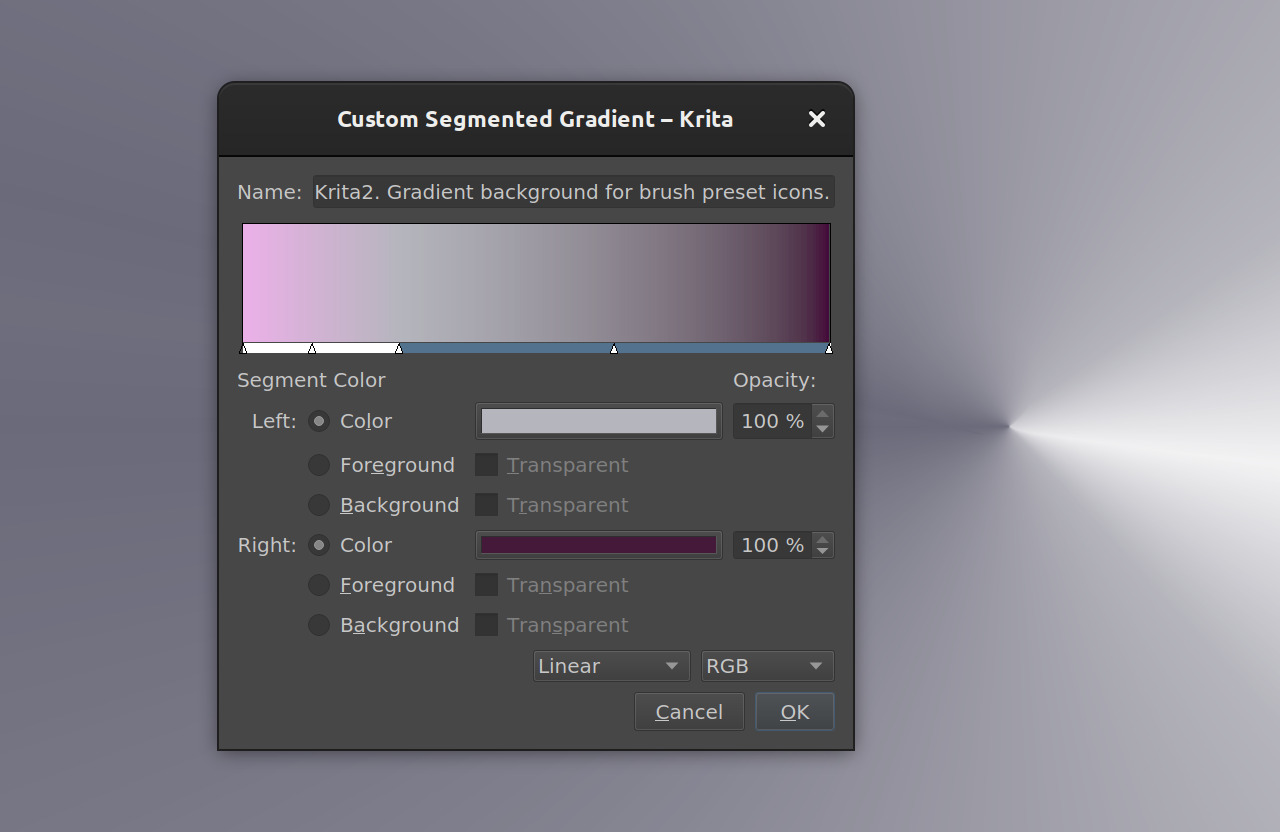 The Mesh mode of the Transform tool now has spinboxes to set rows and columns, and a checkbox to show/hide control points. Also, the Similar Color Selection tool can now work on either all layer or all layers with labels, not just the current layer.

There’s a new node-based image editor called Cascade around. It’s all GPU-side processing based on Vulkan (save for G’MIC in git), 32-bit float per channel precision, Qt-based user interface etc. The latest alpha release only has a Windows binary. It’s theoretically possible to build on Linux but I’ve had no luck with either the release or the latest code in the git repo. Do check it out though. And there’s a Pixls thread to talk to the main developer to.

Been a while since I looked at RawTherapee. Quite a few improvements merged to the main development branch recently, including a vectorscope and a waveform histogram. Blender 2.91 is out. Some of the highlights:

For more information, see release notes and this video:

Compare to .glb/.fbx, the new .ds3obj file contains not only the result mesh, rig, motions, and textures, but also includes the node, edge and other original infos from the document.https://t.co/69qJoja1Ud#Dust3D pic.twitter.com/rSTT44aGII

Godot 2D Navmesh Generator Alpha is RELEASED! It (hopefully) allows easy and quick creation navmeshes for your 2D games. Check it out https://t.co/ZSxBjtLl1d and let me know about issues (I expect there are lots). #GodotEngine #gamedev #indiedev #screenshotsaturday pic.twitter.com/YoJJ3hqjeU

The Open Compute Project announced CADCloud which is essentially a CAD/EDA files server and a workbench for FreeCAD 0.19+ to access files on that storage.

Dion Moult added a blog to the OSArch website to cover the topic of using free/libre software for architects.

The schematic editor in LibrePCB now supports standalone text items (you can add, modify, and remove them).

Quite a few bug fixes and improvements landed to Olive, but also some features:

Kdenlive got some fixes for subtitles.

Hermann Meyer released the first public version of Fluida.lv2, a sampler based on FluidSynth. Grab the source code tarball here.

Nick Dowell released a new version of amSynth. It’s been a while since I last looked at it, here’s a quick overview of recent changes:

Marta Gvozdinskaya, an Inkscape tutorial on creating a fabric layout for better pattern placement and making the most of the fabric:

Another Inkscape tutorial, from Ahmad Arzaha

Krita tutorial by Pallab, good luck looking another egg in the face now! :)

Totally missed this new series by Ngan Pham, made with Krita:

Emilis Baltrusaitis put Google Maps and Blender (as well as some proprietary tools) to an interesting use, see comments in the post for how-to details: