GIMP’s new image processing engine got its first update in three years, and it’s so full of awesome you’d cry and demand GIMP 2.10 released right next to it. 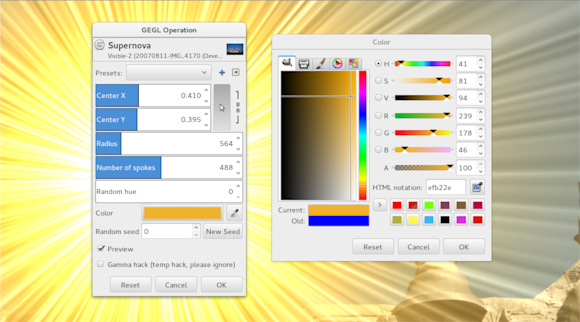 A lot of work has gone into making GEGL faster. There’s still a lot of work to be done, but the new version features major improvements such as:

Better thread-safety and experimental multithreading support. You can run e.g. ‘$ GEGL_THREADS=4 gimp-2.9’ from terminal window. But don’t expect this to automagically improve performance: it still needs a lot of testing, and developers are interested in thoughtful reports.

Experimental mipmaps support. If you are not familiar with mipmaps, here’s the basic idea. Instead of working on a huge image in its entirety, an application generates a smaller version of the original image and processes it for preview. While you are evaluating the preview, it silently chews the real thing in the background. Again, it’s an experimental feature currently not used by GIMP, whether it will prove to be GIMP 2.10 material depends on contributors activity.

New default tile backend writes to disk in a separate thread. This should make GIMP more responsive while saving/exporting files.

GEGL 0.3 also got 71 new image processing operations. Mostly they are ports of existing GIMP filters, and that automatically makes them eligible for the future non-destructive editing workflows. A lot of that work was done by Thomas Manni who is among the most silent and hard-working GEGL contributors of late.

However, porting GIMP filters to GEGL doesn’t necessarily end at writing a GEGL operation and compatibility code for GIMP to keep the operation accessible for plugins and scripts. Some GEGL filters like the Fractal Explorer have a lot of options, hence automatically generated user interface may simply not fit even a 4K display vertically. 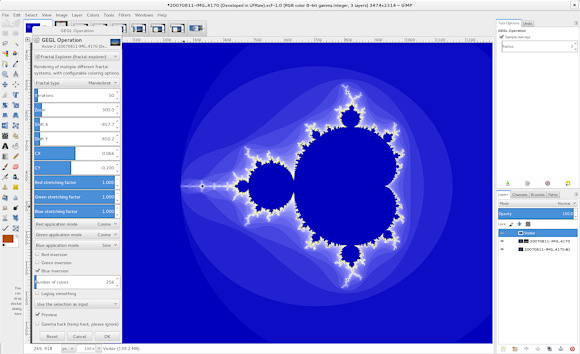 To fix that one needs to write a custom user interface in GIMP. This started creeping into GIMP’s code base about a year ago. Diffraction Patterns operation is among notable examples of making a familiar interface with all the benefits of using GEGL tool’s skeleton, such as presets and live preview on canvas. 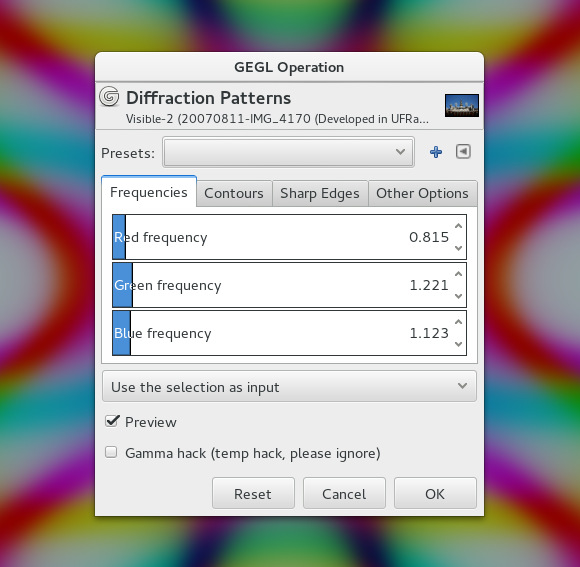 On a related note, one of slightly nerdy new features of this GEGL release is ‘ui_meta’. Basically, now GEGL operations can provide useful hints to GEGL-based applications about best ways to render user interface for various properties.

Here are just a few examples. If you want GIMP to display a rotary widget for the quick setting of an angle, you can add ‘ui_meta (“unit”, “degree”)’ to the property in question.

The (“unit”, “relative-coordinate”) meta will create a button next to input field, by clicking which you will be able to pick a relative position from your image, for example, the center for a Zoom Motion Blur effect.

X and Y values can be locked to each other, and you can pick a relative position

More work needs to be done on range of proprerties’ values exposed in user interface.

But wait, there’s more. Jon Nordby backported all the changes to GEGL he made while working on The Grid, an artificial intelligence based CMS that relies on GEGL for all image processing work. One of them is reading custom GEGL operations written as JSON files.

The idea is to reuse the concept of meta-operations already available in GEGL for a very long time. E.g. such a core filter as unsharp mask is actually a meta-operation that combines the use of several other operations: add, multiply, subtract, and Gaussian blur. You can create your own meta-operations of any complexity with img_flo web app, then use them from within GIMP.

Finally, just to avoid confusion, newly released GEGL 0.3 is not something you can “install” into existing stable version of GIMP and automatically get all the new features. It’s best to treat this as a foundation of what’s coming in GIMP 2.10 and beyond.