Blender community finally got its own first musical. Chris Burton published the short animated film “En Passant” (fr. “in passing”) made with Blender. The project had been for 2 years in works by a dedicated team of over 40 artists, musicians, and actors.

After several public screenings the film won two Jerry Goldsmith awards : Best Song and Best Soundtrack for an Animated Film. As Bart stated on Blendernation, “This incredible movie [..] is going to be one of the icons in Blender’s history”. Fair enough!

The interesting detail about the animated film is that the project had zero budget. So we asked Chris Burton some questions about the production.

The “En Passant” movie has a bit of a dark mood, and it’s a musical at that, too! :) How did you come across this idea?

Put the dark mood down to my ever-increasing cynicism ;) I’d like to pretend the idea was an epiphany while gazing wistfully at the stars, but actually it just evolved very naturally from Leeran’s first pitch.

He had the idea of a “mafia musical”, about a street dancer who falls in love with a don’s daughter, and has to rescue her when she gets kidnapped. I made a remark — almost as a joke — that this sweet and innocent girl should murder her captors unexpectedly at the end, and I think it quickly then became apparent to both of us that she was by far the more interesting character. 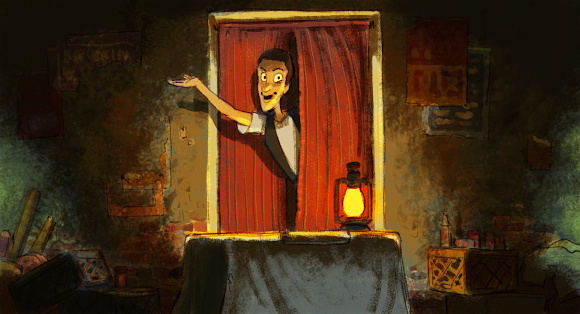 I decided to take the story in a different direction, making her and her inner struggle the focus. I started to see it as less of an edgy love story and more as a way to explore themes like nature versus nurture, the degree to which we can blame our actions on our upbringing… You know, upbeat stuff.

As for it being a musical, that was totally down to the quality of Leeran’s work. I’d never considered making one before, and I still haven’t finished watching Chicago, which I bought for research when we started.

Leeran wrote to me. He’d watched one of my earlier works, Taste Lab , and was interested in teaming up. We spent a few weeks just shooting ideas back and forth, and when he started to send me piano tests I knew it was a film that had to be made.

It was a very healthy collaboration — mainly because we’re both obsessive, perfectionist workaholics — all bad qualities that suddenly become good when you’re an artist!

I see a lot of artists banging their heads against the financial wall whenever they try to make a short movie of their own. Typically they end up on Kickstarter, IndieGoGo, Anipipo etc. So how did you manage the inevitable expenses? It’s clear that artists can work remotely for fun and/or publicity, and you did use models from Blendswap, but at some point you needed e.g. a studio for recording, mixing and mastering.

I happily left pretty much the whole audio side down to Leeran, aside from the dialog directing. He is literally a master of sound, with access to loads of musician friends, a college recording studio and resources way beyond what I ought to expect — I’ve been very spoilt!

Voice recording sessions were done at his home in Seattle, with me in London. I’d have to log on to Skype at 3am and direct actors on the other side of the world, while he’d be hooked up to a separate computer just listening to the voice work as it was being recorded. 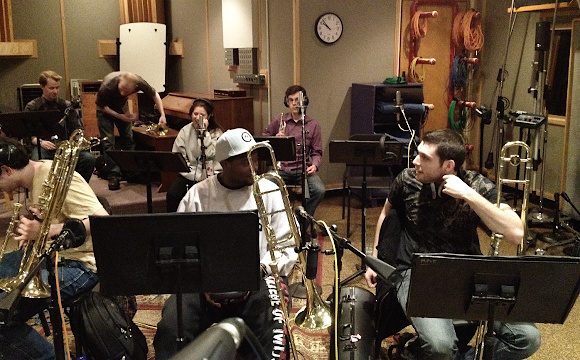 That said, I’d have loved to have had the team all in one room. We managed without, but creativity and mood is so much better when you’re face to face.

How did you bring together the team and find the participants? What kind of networking did you do?

I don’t think I did much out of the ordinary so far as networking went. Whenever I saw something cool by an artist that we could do with, I’d just make a note, so that when the time came I had a whole bunch of emails, Youtube accounts and forum names to write to.

Timing was very important — I’ve seen other projects fall apart because too many people get together early on, so I only started asking for help once we had an animatic, script, songs and animation tests to show what we were going for.

It was also important to strike that balance between giving people instruction, and also giving them creative freedom — especially given that we couldn’t offer them anything financial. 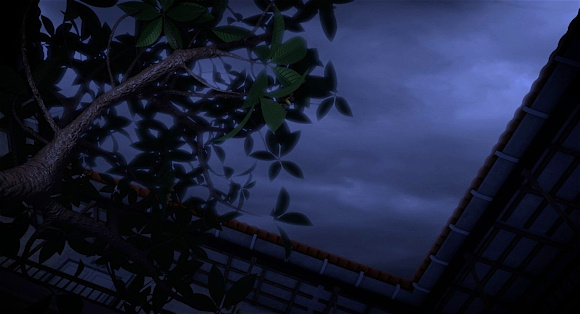 Andy Cocksey, who modeled the beautiful tree in the center of the courtyard, did a bit of research and decided to make a frangipani tree, which in many cultures is symbolically linked with death. It’s a great detail we never would have had without that “focus yet freedom” approach.

My educated guess is that in any production there are tradeoffs to be made, especially when there’s little to no funding. Looking back, is there anything you would’ve done differently, if you had more time, more funds etc.?

I think we were exceptionally lucky to get the quality we did without any backing — a full orchestra and professional technical artists aren’t things you can normally expect to have on a project like this. Still, having funding would have fundamentally changed the way the project would have been made. 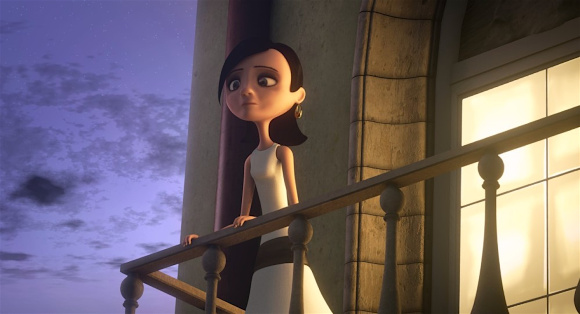 We struggled to find Blender animators with enough free time to help, so I ended up spending six or seven months doing nothing but the character animation. I had to be so focused on that I wasn’t able to bring anyone new on board until it was done. With backing, we could have brought more animators on board, which would have freed me up to work with our technical team sooner, you get the idea.

Specifically, I think some of the crowd shots in the bar are slightly below par with the rest of the film, and that was definitely a budget issue. I hired a render farm for a little while, but it was pretty expensive and there was only so many times I could go back and re-render the same shot — the ones with crowd took upwards of an hour a frame. 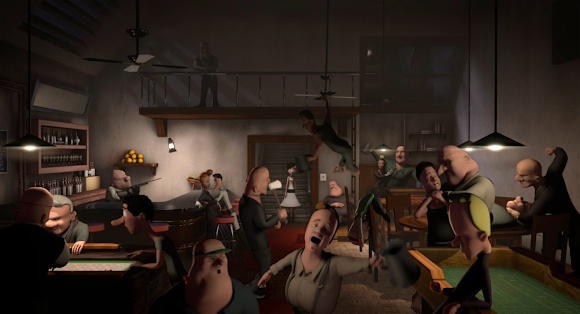 But, being a filmmaker first and an animator second, it was the story that took precedence, and regardless of the budgetary constraints we managed to tell the story I wanted. It’s interesting, though, to look back and see how the lack of funding influenced the earlier story decisions for the better.

I made the choice for the climax to take place in the courtyard, for example, to save us the trouble of making another set. Things like that actually helped the flow of the story, I think.

In my opinion, you managed to make the characters very believable. I think many people who make rigging and animation want to know how to make characters' acting vivid instead of wooden. What would you advice them?

Thank you very much! It’s definitely not the best animation in the business, but I would like to think I got the principles right, at least. What helped this film in particular was that I was so attuned to the personalities of each of the characters. 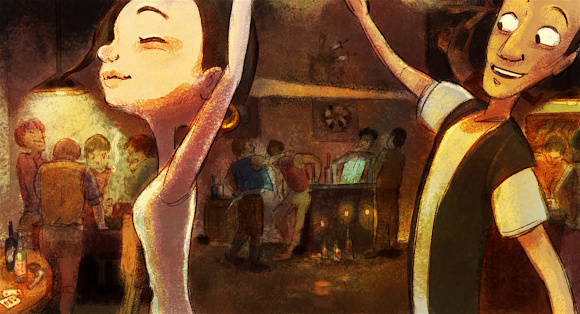 It was a two-year production, but the whole of the first was just spend working on the script, songs and animatic. By the time it came to animating, I’d had a long time to think about who the characters were, and how they’d act to the various situations. It’s more about what they’re thinking rather than saying — often the two will be the same, but sometimes they’ll be totally different.

In more general terms: practice, observe, and practice again. Read The Animator’s Survival Kit by Dick Williams — it’s almost a cliche that every animator recommends it, but it’s totally justified. Practice some more. Be your harshest critic, get your work judged by people who don’t spare your feelings. Also: practice.

What do you think was the most fun part of making the movie in terms of tinkering with the techhology?

I really like compositing shots using nodes. I’d better elaborate since I didn’t sound enough of a geek just then. It’s a real “science-meets-art” job that’s fun to play around with.

Before we settled on the film’s final look, I played around with quite a few NPR techniques, and it was really easy to render a whole bunch of passes and plug them together in different ways.

What was the most difficult part — well, other than having to wait hours to render a few seconds? What kind of improvements in Blender would make production of this kind of animations easier?

Actually, waiting for renders was one of the better parts — I’d just watch TV until they were done.

I think Blender definitely needs some improvement made to it’s file-referencing and proxy-ing, but it’s certainly workable at the moment. It’s quite complicated to import a character, set a proxy, sort out layers / parenting, and a lot of that could be automated. 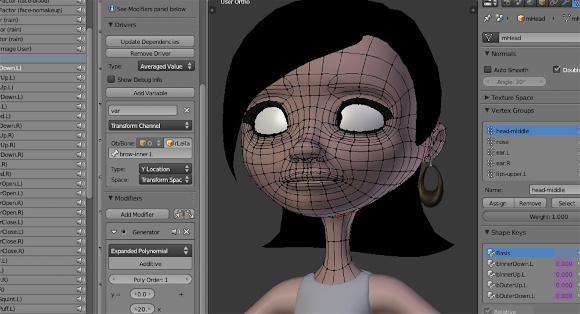 My rigging wasn’t perfect, I had to rely on a ton of correctional shapekeys. I had to import the troublesome animation into the original character file, apply changes as a shapekey, tie it to a custom variable on the rig and update the animation file. That workflow could use some refinement.

But really, those improvements are all about making things easier — Blender’s an amazing piece of kit, and there was never a time that I wasn’t able to get what I needed out of it.

Which part of the recently published roadmap draft makes you most excited, if any?

Oh look, just like that — better asset and proxy handling! I knew they’d get on that, that’ll be great. Also good news about the sequence editor, it’s high time it got some love. I like the VSE already — it might be kind of “raw”, but you know exactly what you’re getting with it. I’m excited to see what they do with it.

Which recent animation movies inspired you lately? Are there any movies that have a long-term effect on you?

Ashamedly, I haven’t seen too many animated movies lately. As Brad Bird said, it’s not a genre, it’s a medium — and most animations these days kind of all blur together (OK, that last part was just me).

I like a big range of movies, but those with the biggest effect on me are often those with great atmosphere and sense-of-place. Nirvana is one of my all-time favorites, check it out if you can. Italian cyberpunk — it works so well!

Visit enpassant-movie.com for more information about the animated film and the crew.