Ever wondered if you could get one of those fancy vinyl cutters and not abandon Linux? Let’s talk about your options here.

Recently I did a bit of Inkscape consulting work for an overseas client who needed to do some specific vinyl cutting job and wanted to use Inkscape to cut the total cost of ownership (pun intended).

He wasn’t ready to use Linux in that particular case which would simplify the workflow a lot (later you’ll see why), even though he generally likes that system. But I took the opportunity and in my spare time did some digging. Here are the results.

What vinyl cutting amounts to

Most cutting devices rely on HPGL printer control language and its versions such as CAMM-HPGL (Roland). So the job is, essentially, to take a vector graphics file and convert it to HPGL, then send it to the device along with control commands such as blade speed and pressure. 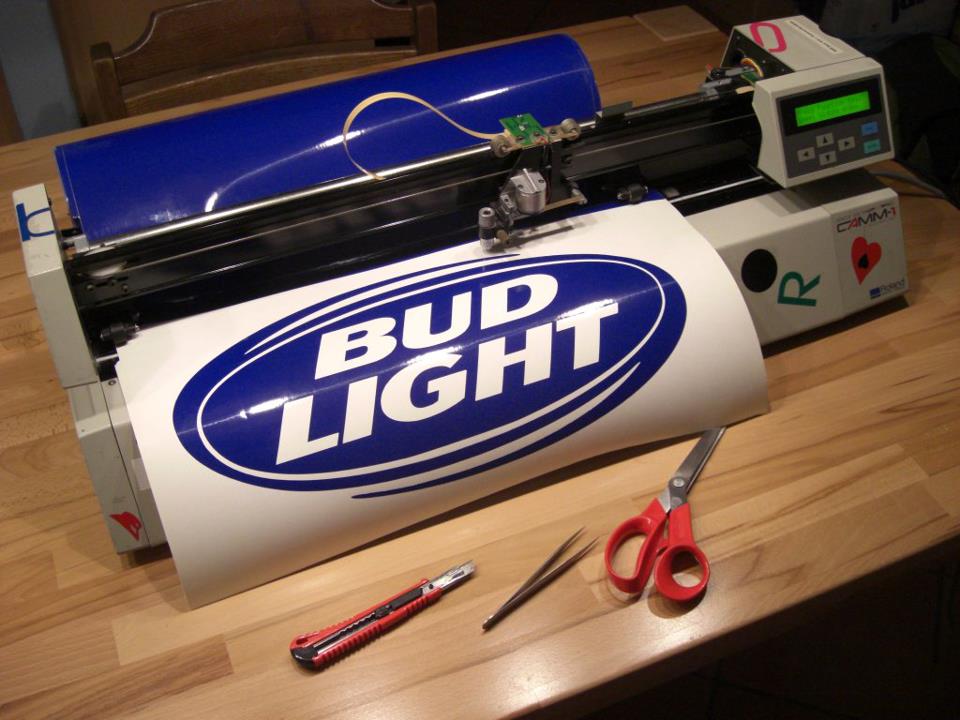 Basically there are two approaches that vendors take: standalone applications and plug-ins for most used vector graphics apps which are Corel DRAW and Adobe Illustrator.

Standalone apps typically provide more device specific controls and have some extra features. Plug-ins, however, are great in case you need to cut really a lot, and fiddling with importing/exporting is so much not an option. Some argue that using plug-ins is more risky, because with a different “page” orientation it’s easier to mess up the blade (a 50-100$ repair). But in the end it’s all up to you.

In the case of my client it was GCC which ships both. GreatCut, their branded standalone software, has quite inferior user interface and likewise far below expectations UX. And yet it has features that you won’t find in typical vector graphics editors, such as optimized distribution of selected objects across vinyl roll so that less vinyl goes to waste.

Well then, what options do we have for Linux?

This is an Inkscape extension, so you can do the cutting directly from the editor, without exporting any files. Inkcut is written by Jairus Martin who is part owner of Vinylmark LLC . As you can guess, the guy has a lot of hands-on experience with cutting. 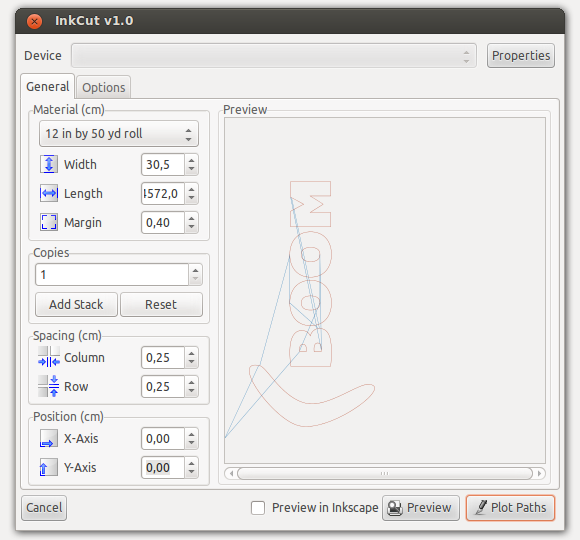 Inkcut works with pretty much every vinyl cutter that receives HPGL commands and uses Serial/USB interface. Some devices connected via the printer port are supported as well. The list of devices that are reported to work has 57 entries so far. You can set some low-level device-specific options in the Device Properties dialog. 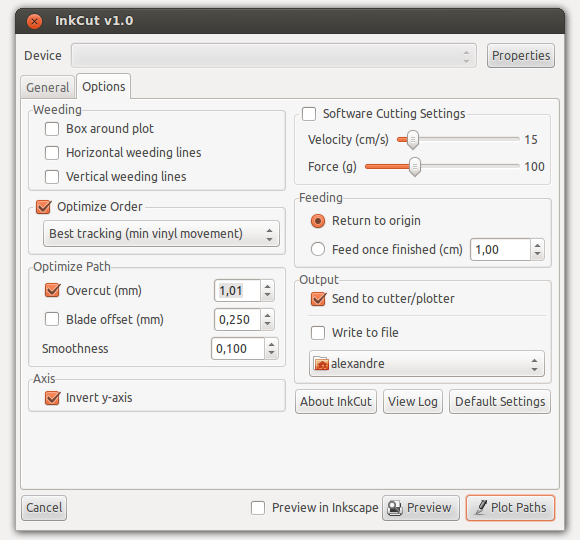 The preview area shows objects’ outlines (red) and visual hints (straight blue lines) where the blade will start the operation. You need to click the Preview button to re-render changes inside the preview area. Alternatively Inkcut will create and open a temporary SVG file for you. 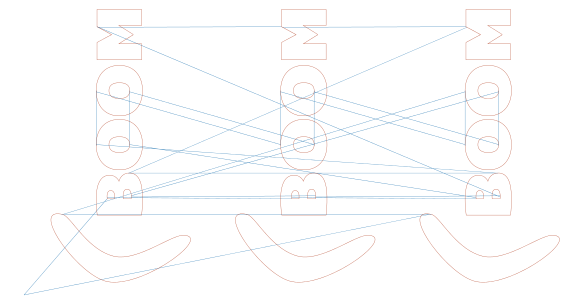 The application doesn’t have a terrible lot of options yet, but does allow to set margin and automatically create copies of selected object with user-defined spacing for rows and columns.

All in all Inkcut seems to be the most convenient solution on Linux at the moment.

The current version is available for downloading from its home page and officially works on Linux only (theoretically it’s possible to get it to work on Mac after a bit of a headache). Jairus has certain development plans , but they are currently low priority.

Originally Tux Plot was known as CAMM-Linux, which, as you can easily guess, refers to the original range of supported devices (it’s Roland’s reduced instruction set of HPGL). Today Tux Plot is a bit more than an app just for vinyl cutting.

The application supports other kinds of devices such as plasma tables, pen plotters and so on, which shouldn’t be surprising at all as many of them rely on HPGL which really goes way back. So in the UI you’ll find controls not just for XY speed, but also for Z axis speed and depth. However you don’t need to even touch them: choosing a quick preset such as Vinyl Cutting automatically disables irrelevant options and sets sensible values for the relevant ones. 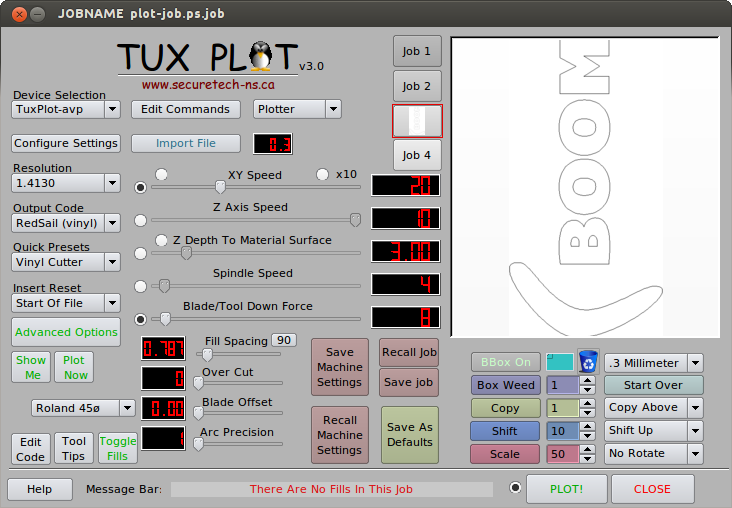 Installing TuxPLot involves creating a new virtual printer device and several folders in the user’s home directory, including the one called ~/hpgl-hot-folder. This is where you can drop an EPS, PS, PDF or SVG file that will be automatically picked by a Tux Plot daemon and converted to a new job for the Tux Plot program.

The part below preview window is where you can control placement of the object to be cut. You can also duplicate the object. The UI for that is not exactly awesome as you can’t literally pick and drag to where it should be.

In general, the user interface definitely needs much work. Hopefully this will be addressed in future revisions. The project is active with the latest release available since April this year.

This application is a bit of a black horse. The project is intended to be a free alternative to Roland CutStudio, PostCut etc. It was started by Igor Novikov and depends on currently unreleased UniConvertor v2 which is why it’s not yet officially released either. 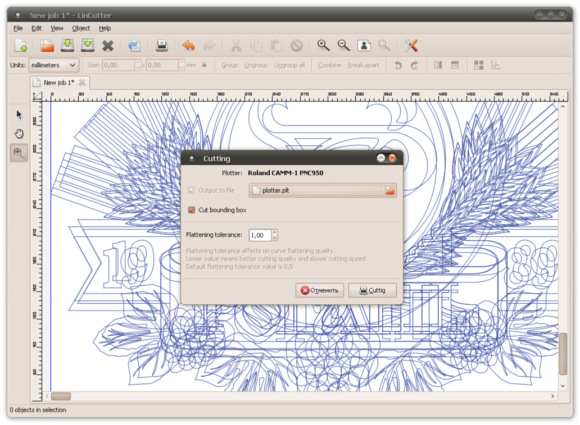 LinCutter works as standalone application only, and is capable of opening PLT and CDR (v6-v13) files. But the primary file format is PDXF which is the file format by PrintDesign, the successor to sK1. More file formats will be available via UniConvertor later.

After importing an illustration you will be able to select, duplicate and move around objects, as well as outline, group and ungroup them. The application doesn’t seem to provide controls for cutting speed and weight though. 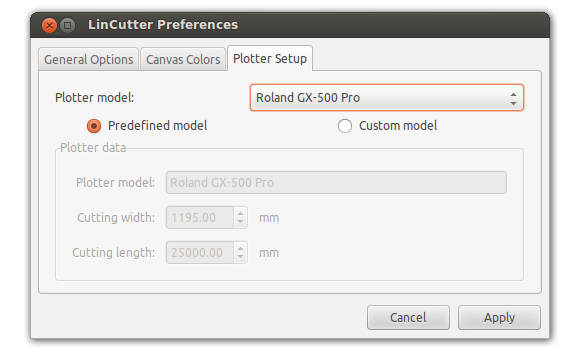 LinCutter lists 35 supported models from vendors like GCC, Roland, Graphtec. It also says it supports all models by Kingcut on top of that. However I have a gut feeling that just like with Inkcut you will be able to use any HPGL-based device.

The official release is currently planned for this summer along with UniConvertor v2. If you feel adventurous to try it anyway, the code is in a public SVN repository . Unfortunately it looks like either UC2 from SVN or LinCutter itself have broken installation scripts, which is why you can’t get LinCutter to do anything sensible yet.

Options for Windows and Mac users

OK, so you are an Inkscape user and you are looking for vinyl cutting options on either Windows and Mac. Is there a way you could avoid getting involved with Corel DRAW and Adobe Illustrator? Why, yes — there are few options.

If you want to hang out with other Inkscape users and ask questions specific to vinyl cutting, you have two options:

Our next stop could be cutting plotters on Linux. What do you say?