The most unstable of them is 5th alpha of Ardour  3, first new alpha release in nearly two months (the plan is to return to couple releases in a week routine). Mostly it provides bugfixes, but a very important new feature is compound regions: you can now join and split audio regions non-destructively. Same feature for MIDI tracks is currently in works. The shuttle widget was redesigned too:

A more stable release is where Qtractor steps in. This is also a bugfix release which nevertheless has some new stuff. Most visible changes fix small usability nuisances here and there (visualization for muted tracks is especially nice). The most useful real feature, it seems, is tapping tempo in the Tempo map dialog. 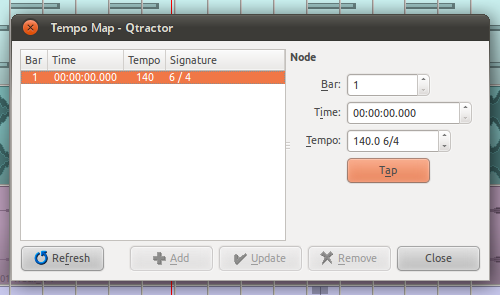 A slightly exotic new feature is switching between scales when you do quantization: 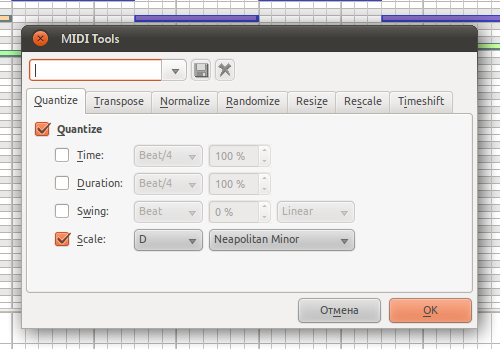 Just in case, it also works real-time for recording MIDI. You only have to enable a new toolbar in the MIDI editing window and select a scale you need. Hopefully a choice of over 60 scales will suffice :)

Finally, Mixbus 2.0 was released with some major improvements and new feature. The actual selling point of Mixbus, the mix buses, was doubled: there are 8 of them now. The mixer strip can now additionally contain controls for plug-ins in use (you can map whatever you wish), and you can also control Input Trim, Makeup Gain, Sidechain and Master Limiter from the mixer. Here is what the whole thing looks like now:

The editor also got some love. Most notable new features are two new editing modes:

Mixbus is now out of “introductory” period, which means it’s available for its full price, $219. The team is still committed to Ardour, which is what Mixbus is based on, and keeps contributing to it.

There have been several more important releases lately:

With recent release of Renoise 2.7 we keep getting tools for every workflow. Now if only 2011 turned out to be The Year Of Qtractor Automation :)