Few days ago developers of OpenOctaveMidi, a new/old digital audio workstation for Linux, presented the brand new v2011, the culmination of several years of work.

OpenOctaveMidi is built on top of MusE2 MIDI sequencer, but apart from redesign it features tighter LinuxSampler integration plus even more customizations to meet requirements of composers writing orchestral music with large sample libraries.

Looking back at the old threads about the project, I once again stumbled upon this Christopher Cherett’s statement in a public mailing list:

You know I never wanted to develop audio software, I have much bigger fish to fry. It is just my wife’s pipeline is so big that the current software was caving in. I tried to get help from the coders, but there is never much of that to go around. So I took matters into my own hands.

That was interesting enough, so I decided to ask several questions to both Christopher and Alex Stone, one of the other active team members.

What are the key requirements that make all other DAWs not so well suited for doing complex orchestral work?

Alex: The OpenOctave project was started as a result of several important tools missing in other DAWs, especially in Linux. To name just some of them:

There’s a lot more, but these are among the main ones that we sought to find, and couldn’t. Where tools were present, they were “isolated”, as in a set of tools that could be considered as “generic” were missing a few, so the momentum of workflow was constantly brought to a halt. The concept of managing large sample libs was nonexistent. Where one app would have one function, it lacked another, and vice versa for another. 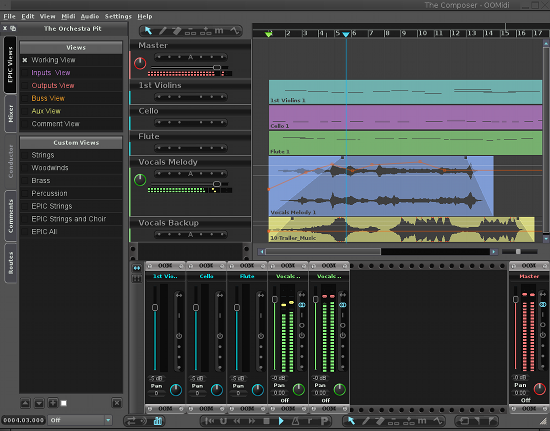 In the past you evaluated other projects such as Ardour, did the first version of OOM based on the old Qt3/KDE3 based version of Rosegarden, made a short detour to Traverso, but eventually ended up forking MusE and building on top of that. What was the technical aspect that had led to this decision?

Alex: Yes, I did the rounds, and although MusE was insufficient in it’s current state and design direction for our particular needs MIDI-wise, there were existing tools in the code that provided an opportunity to further develop into a decent DAW. Many of the tools hadn’t been worked on for some time and didn’t work or only partially worked, but our little team had a look, and thought we could make most of it work, and code the rest, for our specific goals.

How many of the initial goals have been reached by now?

Alex: We’ve hit all our goals so far in this release. The tools are working, and we’ve added some powerful new features that go well beyond the original MIDI framework in MusE. We set out a plan of what we wanted to do, and as a result of that approach, the plan matured as we executed it, and new features were added to further enhance stages in the plan. We’ve not been haphazard about OOMidi development at all, and have worked to a timeline of goals, culminating in the OOMidi-2011 release. So yes, we hit all the targets, and got the release out in the timeframe we set.

And the project was initially started to make a DAW for one particluar person :) Is it correct?

Alex: Christopher did indeed start working on OOM for his wife, and yes, she not only uses it, but has had a significant input and direct contribution into shaping the design. She’s part of the team, and our “conscience” in an objective sense, which has played a big part in the design and shaping of the tools we have. She’s a very good musician, and a great counterbalance for the team, when we have our heads deep in a design, and need a detached voice to provide a wider perspective.

Christopher: Yes, my wife composes music and needed the tools. So we have put a sizable amount of TSI (a company my wife and I founded around 11 years ago) development towards OpenOctave to give Wendy the tools she needed. My wife is very, very picky when it comes to using software. This app is more about what she wants than duplicating what others are doing. 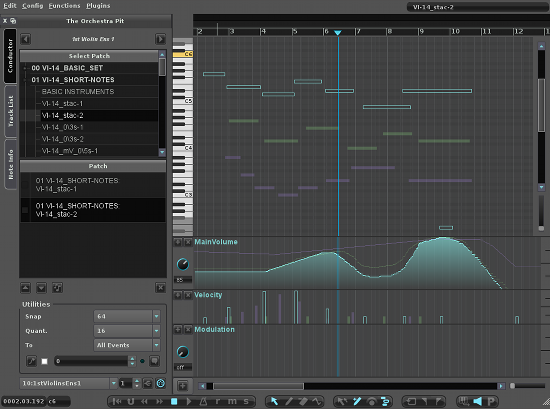 Wendy is working on a movie with me — it’s feature film animation, an action adventure that will be done in Blender. We are currently in preproduction and we hope to go into production sometime in 2012. That is why we built OpenOctave — to score the film. But it’s important to mention that we need to score it in Linux and open source software. I have personal feelings about making this work in FLOSS.

Christopher: If it wasn’t for open source and Blender, I would never have put my hand on 3D. I always wanted to become an animator since I was a little boy. That dream gradually dissolved over the years. Then about 7 years ago I decided to look at Blender. So I took 2 months off work to learn it, and I was hooked once I got the hang of it. In Blender I could create anything I could think of. It’s a truly powerful software. You could tell any story you wanted and take people anywhere you could dream of.

Alex, what was your interest?

Alex: My intent has been the same from the start of my Linux journey — to have a great app with decent workflow, a complete set of tools to work with at a “professional” level, and an active working environment that actually works, all day, every day, for using large sample libs to create orchestral and film related music. That not only involves having a decent DAW, but all the system and infrastructure tools to do the job.

Up until Christopher and I got together, we’d both struggled with trying to get a complete, coherent, system, and very few were enthusiastic about our particular use case. (Very very few, if I’m honest about this). 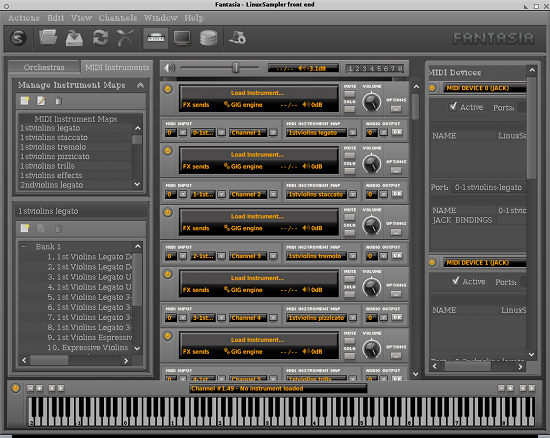 We did however have a good response from the LinuxSampler team who saw what we were trying to achieve, and they made changes in LS to accommodate us, to the extent that Christopher and I felt we could create a common project, as we had, more or less the same goals.

Other tools we required didn’t exist, and we couldn’t seem to get the message across to others, however politely, who were developing in our general direction, so OpenOctave was created as a result. Everyone scratches their own itch, I guess, and we did what so many suggested to us, and that was “do it ourselves”.

How many people are in the team currently?

Alex: There were originally 4 in the team, which has expanded to 7 at this time, as a mix of full-time and part-time contributors, in one way or another.

We’ve a few inquiries recently, so that may increase further in the near future. We’ve got a lot of new users recently, and have had some very positive feedback, as the OOMidi community gains momentum, and users are making noise about contributing in their own way.

How do you deal with development expenses?

Christopher: I have put out many, many thousands into paying people to work on this project all through my company. At last tally I was into this project for over $25000 CAD. I deal with this project in a commercial manner. We are developing our donation structure to possibly get some of my investments back, but if we do not, then it is a business expense my company eats.

It’s been few days after the release. What’s the reaction from users so far?

Christopher: We are seeing a huge amount of traffic and interest in this release. Most unique visitors we have ever seen on the site. And actually, our first donation came in today :)

Which issues and features are you going to address in the planned 2012 version?

Alex: Not sure if there are issues for 2012, but we do have a plan for that release, and a roadmap we intend to finetune in the next couple of weeks. Stay tuned!

Christopher:Yes, we have an aggressive 2012 roadmap.

OpenOctaveMidi is currently available as source code tarball at Github (the actual repo is outdated). Please refer to this page for instructions on building and installing it. The Getting Started section willl guide you through most importants steps of learning the application. Discussions usually take place in #openoctave at Freenode, and you can follow the team on Twitter.