The news is a quite interesting development of a slightly dramatic story involving a community of extremely passionate Adobe/Macromedia Freehand users, an ill-accepted rebranding from Gravit’s predecessor Expressive into Stagestack, a failed fundraiser, first considerations to open the source code, and, finally, a bold move into rewriting everything with HTML5, CSS, and JavaScript, followed by rebranding into Gravit.

The new vector graphics app is an ommnivore: it’s available online, there are builds for Linux, Mac, and Windows, you can install install it on Chrome and Chrome OS. And yes — now there’s also source code on GitHub. 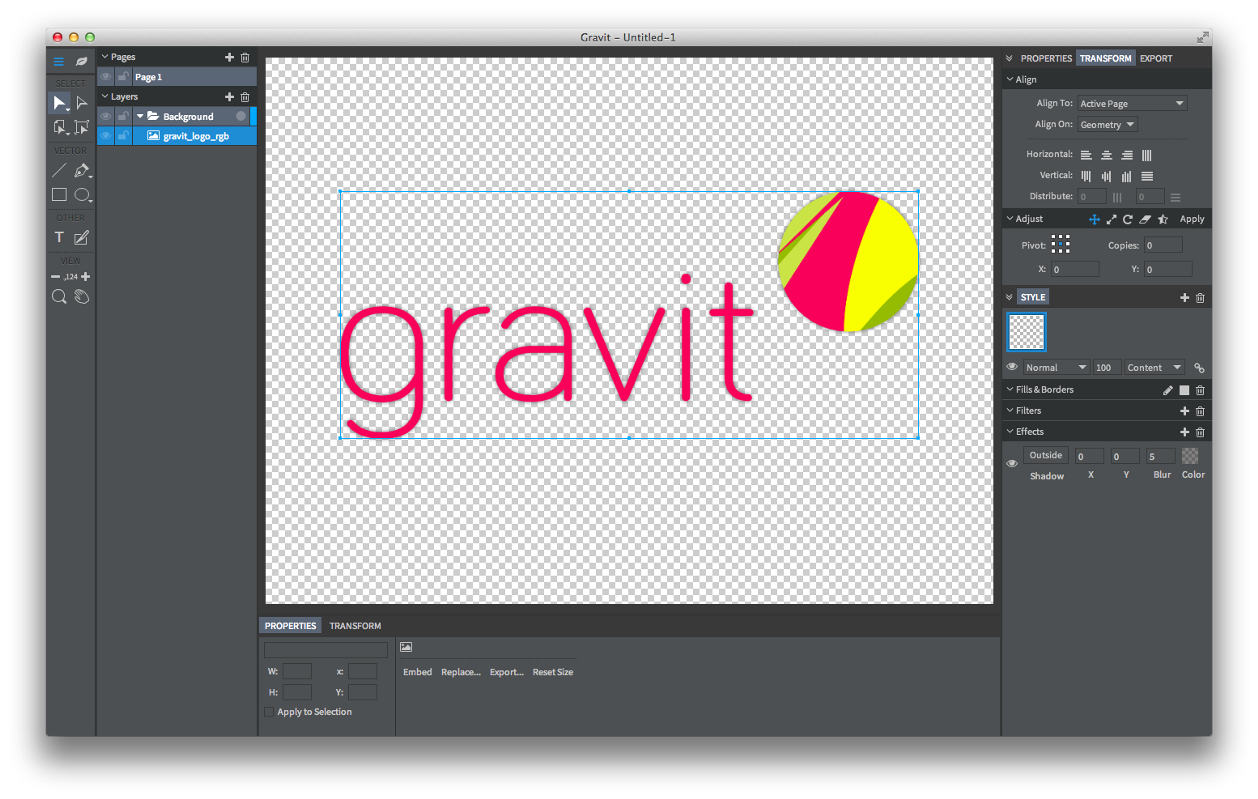 While Gravit subjectively feels a bit barebone in terms of features as compared to either free/libre apps such as Inkscape or commercial counterparts such as Adobe Illustrator, it has the foundation for something serious. Basic shapes, gradient fills, multiple strokes, snapping system with smart guides, transformation and alignment, as well as slicing are going to make one hell of a v1.0 in September 2014, should the deadline be met.

We spoke to Alexander Adam, CEO of Quasado, about the reasoning behind the change of heart, and about company’s further plans.

Alexander, judging by your article on Medium, your situation falls neither under “we are broke, so we opensource it to let it live”, nor under “we really dig that opensource thing, but we’ve no clue about our business model” case. What is your plan for making this project commercially sustainable?

In your post on Medium you also mentioned commercial addons. What kind of?

Prototyping (including actions for events etc.) and animations are biggest ones. Furthermore, we’re also working on a full PostScript interpreter addon to read/write AI, PDF, EPS, and PS which will be a commercial plugin for Gravit, even though others are, of course, free to write their own free addon to do the same.

Given your extensive past expertise with SVG, the Renesis SVG player, it’s interesting that you only made use of HTML5, CSS, and JS. Why?

Did you design your own DOM?

Yup, absolutely. We’ve designed our own scene graph model. It works similarly to the one we previously designed for Stagestack which already was optimized for fast rendering and performant changes including animations without eating too much memory and CPU power.

How would Gravit handle really complex project with lots of paths and nodes, fills, and blurs? Will you be using WebGL?

Upfront WebGL is (not yet) available everywhere considering especially mobiles. Furthermore, Canvas 2d is blazing fast due GPU acceleration, and most time is spend on blitting anyway which WebGL wouldn’t help with, because you’d need to get the textures in and out.

One of the reasons the Free Freehand community supported you — up to a point — is that they needed both workflow and .fh files support, and you were interested in giving it to them. How do they currently affect your roadmap, and what’s up with the importing/exporting system?

Well, Gravit already combines best of Freehand and Fireworks as of now. Furthermore we already have a large code base for importing Freehand files which will be open-sourced as well, so people may improve it, if things don’t go well.

Speaking of combining the best of Freehand and Fireworks in a single new app, how closely do you replicate the way Freehand tools work? How and where do you draw the line between “we’ll do the same way” and “we’ll do it differently”?

Well, we’ve taken a sheet from the Free Freehand community where they’ve listed a lot of features of Freehand they wanted to see implemented in Adobe Illustrator, and we implemented most of these.

However, we’ve put a lot of effort into combining those features with the ones from Freehand, because we wanted to build a tool that is as good for print design as it is for screen design, and I am really happy with the result so far. Sometimes, understanding and combining features of both applications took us more time then actually building them ;-)

Can you say you have solid feedback from the Free Freehand community at this point?

To be honest — no. We’ve expected so much more, but there’ve been roughly about 25+ people interacting with us, and that’s about it.

My impression from the Stagestack story is that you overestimated the amount of Freehand users actually willing to sponsor development of a viable substitution, given how many had already moved on to other tools. So while Stagestack fundraiser page prominently mentioned Freehand, Gravit’s project page is completely lacking any mentioning of Adobe/Macromedia tools. Is it a marketing decision?

Yes, absolutely. We’ve integrated a lot of features from Freehand and Fireworks, when we’ve considered them to be versatile enough. However, we’ve also mixed a load of our own ideas and experiences into the app, and we didn’t want to be “just a clone of Freehand”, because Gravit will be so much more. That’s why we call it Gravit, a tool in the spirit of former Freehand and Fireworks.

One of the results of rewriting Qt4-based Expressive/Stagestack into HTML5/JS-based Gravit is a dramatic cut of lines of code: from ca. 400K to ca. 100K. How did you do that?

There are a few points here:

Do you see Gravit as a tool with full support for spot colors, CMYK (vectors and images), and reliable PDF exporting with all the print/crop marks and suchlike?

Absolutely! This is one of the “last” challenges considering Gravit being based solely on HTML5, CSS and JS but it is on our list.

How are you going to deal with the licensing challenge when it comes to e.g. Pantone? Will you be using XREF?

We’ve started talking with Pantone but as you can imagine, they won’t license to us as of now. XREF might be a viable option. We’re, however, targeting to create a commercial addon supporting full Pantone spectrum.

What are your plans for Gravit beyond the v1.0 release?