Huion, a Chinese vendor of graphic tablets, is getting increasingly interested in free software. Recently they sent one of its H610 tablets to the Krita team to make sure it’s supported, but is there more to it than meets the eye?

Huion tablets are typically seen by customers as a cheaper alernative to Wacom’a tablets which are, let’s be honest, industry’s standard. There’s a technical difference between devices of the two vendors, of course.

In a nutshell, Huion pens still either have an AAA battery inside or are rechargeable (800 hours of non-stop painting promised), there’s no multitouch, and pads don’t have touch rings. At the same time, most (if not all) Huion tablets have at least 2048 levels of pressure sensitivity and pretty good resolution (H610 has 5080 lines per inch).

It’s not fair to compare devices with non-matching working area and other specs, but if you can live without some of the aforementioned features, a price drop from e.g. Intuos Pro Large’s $449.0 to Huion H610’s $79.99 might be seen as desirable.

But wait, what does free software has to do with it?

A couple of weeks ago a representative of Huion contacted the Krita team and offered an H610 tablet for testing purposes. This nicely coincided with refactoring the team had just done in the code for graphic tablets support.

Krita was recommended by our customers. Huion users choose us for a number of reasons, and I believe the main one would be the price. They recommend Krita to us, because Krita is a public open source painting software.

Although it’s free, according to our customers, it has perfect and professional features for artists. They are very satisfied with this painting software and they do wish that we could cooperate and bring the best out of both of us to the all the Huion & Krita users.

We specifically asked Ms. Lee whether reaching out to Krita team was part of a business expansion strategy to ensure that Huion devices are properly supported by most used applications, or whether there’s a long-term partnership involved. To which she replied:

There’s still plenty of room for us to improve, including compatibility with the drawing software. Unlike Wacom, Huion doesn’t have a long history, and we honestly don’t have too much business cooperation with other painting software companies. And that’s why we need to take the first step.

We will definitely consider it as a great honor if we could have a long-term partnership with Krita, because we give them good credit for their tireless commitment in updating their free but fantastic software to the public. And also, we want to take this cooperation as a good first step for our cooperations with other painting software companies.

So there you have it — a perfectly reasonable business-like approach with a touch of community spirit.

What about the support for Linux, though? That’s where the story get more interesting.

As a matter of fact, Huion created their own driver which they don’t advertize a lot, because they want to simplify its installation for Linux users first.

But at least one user who tried it found it faulty . Nikolai Kondrashov, leader of the DIGImend project, reviewed the driver’s code and ended up writing his own one . 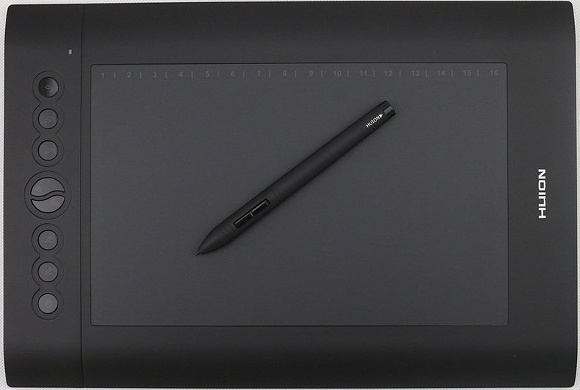 Nikolai recently asked the community to try his driver and report on success/failure, because so far only H610 is known to work for sure, and other models haven’t been tested yet. Nikolai’s driver is also missing support for express keys.

It might be a good idea for the vendor and the DIGImend project to team up and make the best of their collaboration. But that hasn’t happened yet,.

Another thing to consider is the support for Huion tablets by configuration apps. Most GUI tools on Linux are quite Wacom-specific, so that’s another area where things could be improved.

Now, about that tablets code refactoring in Krita…

Oh, right. All this time Krita used to depend on Qt’s to access graphic tablets. The problem is that Qt internally drops up to 90% of incoming events whenever you want to access the information about which button was pressed. This resulted in somewhat clunky lineson the canvas and made Krita not perform well enough with 3D compositors such as the GNOME’s one.

So the team wrote their own code for using graphic tablets and only let Qt do a tiny part of the job (initialization). This also “magically” fixes the unfortunate situation with Wacom support in Qt5 (reported to be resolved for Windows in Qt 5.2.0), but it’s going to be a while till the Krita team goes for the Qt5 port.

Developers also made graphic tablets support work on Windows properly, including non-Wacom tablets. The latter has been confirmed by a Windows user with a Huion tablet.

Would you go for a cheaper tablet? Tell us what you think.