Krita 2.6 released, what’s coming in the next version?

The KDE project announced release of Calligra Suite 2.6, a set of free office, graphics and productivity applications. The crown jewel of the release is Krita, an image editor with advanced painting features.

Calligra is an interesting piece of software machinery. I can’t think of a single release where users wouldn’t question the idea of having a color-managed image editor with HDR features and a dozen of brush engines inside an office suite.

What’s new in Krita 2.6 and other Calligra apps

It would be rather silly to compete against well presented release notes made by the team. Instead let’s just list the most important things and then talk about the future of both Calligra Suite and Krita.

Apart form that the application got a much simpler default layout of dockers: 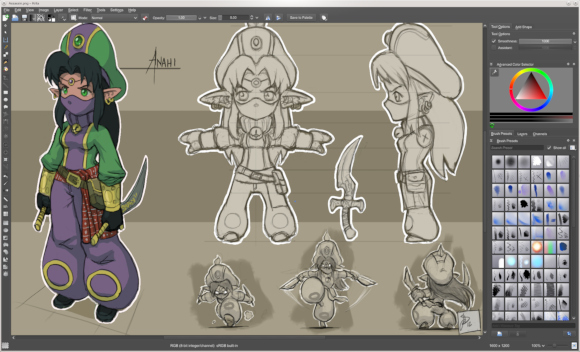 On top of that the new version of Krita supports Layers Stack part of the OpenRaster spec which, basically, boils down to saving layer groups into ORA files. The spec covers more features than that, but it’s what Krita does for now.

In fact, Krita is quite unique even here. The specification was created last summer by Andrew Chadwick of MyPaint team. However, MyPaint doesn’t have layer groups yet. At the same time, GIMP has layer groups, but doesn’t support them in OpenRaster files yet.

Karbon and Calligra Flow didn’t get nearly as many improvements. However the suite now includes the first public version of Author, a new application that aims to provide convenient tools for e-books and e-textbooks authoring (EPUB2 ready, MOBI expected in 2.6.1). And believe me, Author deserves a dedicated article.

For the list of other changes in Calligra Suite 2.6 please refer to the original announcement.

Color managed printing is on hold

Not everything made it into the reelase. A new dialog for color-managed printing was one of the Google Summer of Code projects last year. Even though the project is complete, it’s still sitting in its Git branch. Why?

As Boudewijn explained, the problem is that the author is a bit too shy about his work, and that’s also the reason that Kolor Manager applet hasn’t yet become part of stock KDE releases after several years of development.

Actually, a year ago there was a huge discussion in the kde-core-devel mailing list about choosing either colord-based or Oyranos-based color management applet in KDE as the default one. After a rather heated conversation KDE developers ended up postponing the final decision, aiming to wait and see how things would look after a while.

There is a new discussion on that again since two weeks, and at least one of the KDE’s core team members is leaning towards colord-based implementation in the desktop environment. So things might get interesting for color managed printing in Krita. There is no final decision on that yet, though.

Some of the features of Krita 2.7 are already known: flipbook, weighted line smoothing, better vector tools. 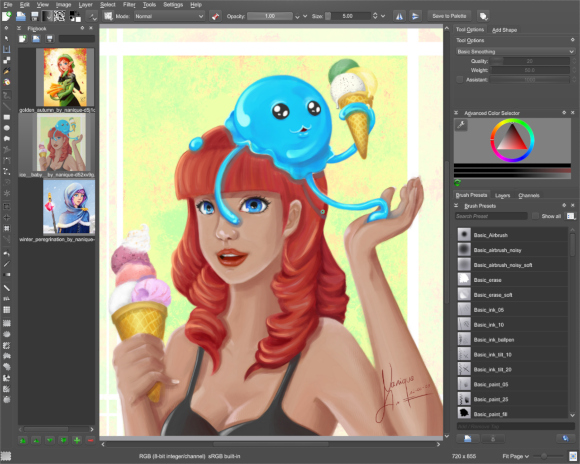 A few of those new feature deserve a special attention.

Integration with deviantART’s Sta.sh API. The first face to face encounter of deviantART team with broader libre graphics community took place at LGM2011, where Michael Halpert gave a talk about deviantART’s work with community of artists.

In September 2012, Matthew Stephens, co-founder of deviantART, contacted a number of open source teams and suggested they had a go at implementing support for Sta.sh, a new cloud-based service for storing and sharing designs. Krita team was among the first to work on it.

Textured brushes are actually part of v2.6, but will be finalized only in 2.7. This feature is based on the research by David Revoy which he started in December 2011 and updated in January 2013. 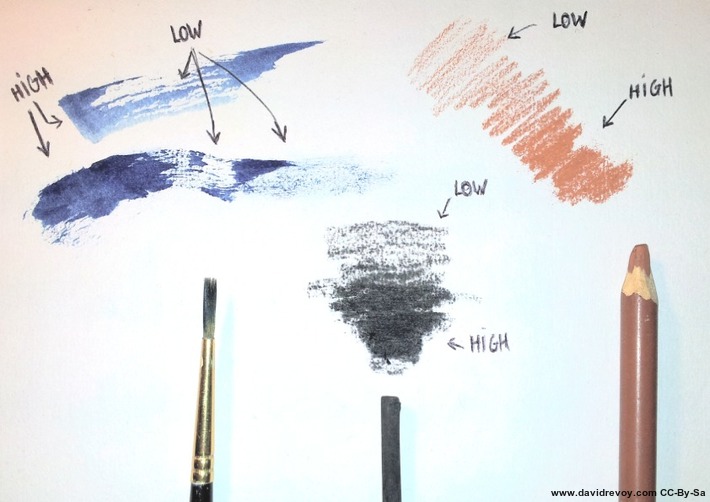 First part of the work on this feature was done by Boudewijn Rempt, then Dmitry Kazakov finished it. David already posted results of his first test of textured brushes in Krita.

You can read more about some other upcoming features in the blog of Sven Langkamp. On top of that there’s a bit that I suggest you treat as a mere speculation. Or, maybe, an educated guess, if you feel generous.

With introduction of OpenColorIO support Krita 2.6 becomes a rather interesting tool for use in VFX pipelines, especially since it reportedly supports layered EXR images.

Now, take a good long look at the list of unclaimed project ideas for Google Summer of Code 2012:

Can you see a pattern?

By the way, all of the project ideas above are moving to the 2013 list.

In December 2012 the team announced Krita Foundation. The new organization aims to raise funds to ensure further development of Krita. They are currently employing Dmitry Kazakov who already did some awesome paid work:

The foundation will focus on just Krita and is considering to release educational materials to raise additional funds.

At the same time, KO GmbH will continue providing commercial support for Calligra and sponsor its development, while KDE will continue maintaining the project.

Krita Sketch and the mobile market

Seeing how rapidly the mobile market grows, one might ask whether Calligra apps would be fit for tablets after certain redesign.

In June 2012 the team announced a new project called Krita Sketch. It’s a customized version of Krita for tablets. Specifically, for Windows-based tablets, and it’s already available for use at Intel AppUp.

I can hear screams coming, but that story goes way into the past.

Boudewijn Rempt, one of the Krita developers, explains: “We founded KO in 2007, because we sort of foresaw that there might be commercial interest in KOffice. We were not wrong: we did FreOffice on Fremantle Maemo, and the Documents app on Harmatting Meego, and there are other customers for Calligra. One of them was NLNet who sponsored the initial port of the Calligra productivity apps to Windows”.

Boudewijn then attempted to make Krita work on Windows as well, just to get the userbase, which would come with donations and iniatives like books, websites and so on, but the team hit a stumbling block: they really did not like working on Windows.

“So I started looking for likely sponsors to help making Krita on Windows stable and dependable.” — continues Boudewijn — “We’d already done a MeeGo version of Calligra for Intel (which never got released, because Intel quit the MeeGo business), but we knew they were looking for cool applications for their AppUp application store, so we contacted them”. 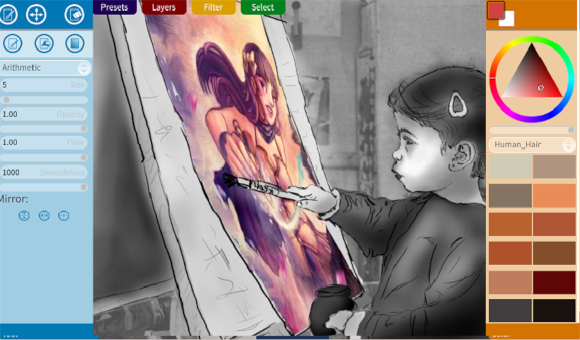 Krita Sketch, the UI was designed by Timothée Giet

Intel returned to the team with a proposal to do a touch-based version of Krita that would show off the power and features of their Windows 8 powered ultrabooks and tablets. The Krita team liked the idea, and so the project is already past the first public release stage.

“For me, the important thing is getting Krita on Windows end-user ready because there’s demand and because I would like Krita to grow into a real mainstream choice” — concludes Boudewijn.

Is it going to stay Win-only? Not really. Reportedly, Sebastian Kuegler already has expressed interest in the project and wants to bring it to Plasma Active, which is Linux.

But what about Android? Boudewijn explains:

We did port Words, Sheets and Stage to Android at one point, but that was a huge pain. The limit on shared libraries was just the start of it. But when those tablets go four-core, it should become more feasible.

No time-wise estimations have been given so far.

With all respect due to MyPaint and GIMP teams, it looks like Krita is currently the most active project among free image editors with advanced painting features.

KO GmbH has been around for nearly 6 years now, and their recent push towards making Krita a successful project actually has a lot of background work to honor. The future of Krita, however, in many ways depends on the willingness of the community to support the project.

Meanwhile Google seems to be warming up for a new Google Summerof Code. KO GmbH will attempt to become a mentoring organization as part of larger KDE organization again, and traditionally they do get several slots. If you are a student willing to have a go and add some useful features, we suggest you contact the team now to get acquainted.