There’s not a lot of free image editors of that class for Linux, and mtPaint, the closest analog, only ever updates in Git repository these days. So any Pinta updates are welcome.

The toggle is in the tools options toolbar, and you can use shortcuts to temporarily switch between them. 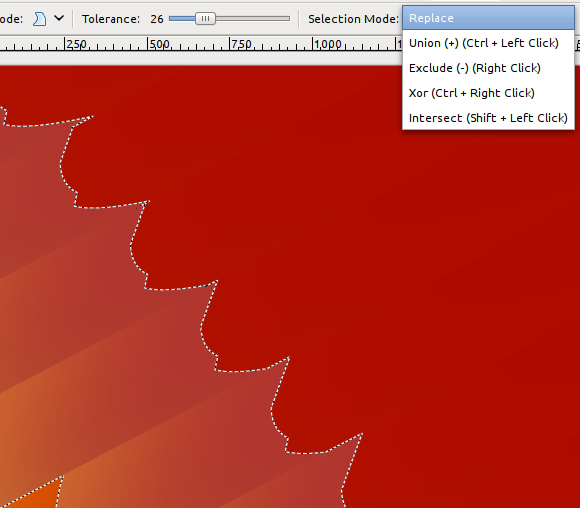 So the new tool seems like a beginning of better selection in Pinta. Hopefully upcoming updates of the application will bring some justice.

As Pinta keeps maturing, it get essential features such as blending modes for layers. The newly released version has 13 of them in addition to the Normal mode.

Most of them are the conventional modes supported by GIMP, Krita, Photoshop et al.: Overlay, Screen, Lighten, Darken and others. You need to double-click the layer in the Layers dock to open the layer properties dialog. 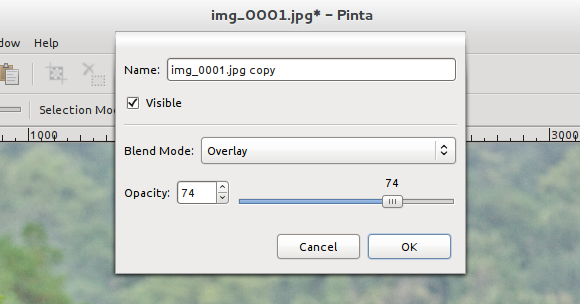 It’s all nice and sweet right up till the point where you use any of the non-conventional blending modes, such as Reflect, Glow or Negation (see this page for a reference) and try to open an ORA image in a different application.

The first thing you notice is that apps like GIMP or Krita will fail to open these images correctly: all such layers will use the Normal mode. This is the usual practice, there’s nothing arcane about it.

But if you dig deeper, you’ll discover that Pinta doesn’t attempt to use proper syntax in OpenRaster files for these modes. For modes like Overlay and Screen the application writes the composite-op attribute the usual way, in the SVG namespace, e.g. “svg:screen”. However for its own modes it uses e.g. “pinta-negation”.

Compare that to Krita which uses its own namespace for app-specific blending modes, e.g. “krita:gamma_dark”. It sounds like a purely technical, irrelevant issue, but it means that developers are simply not familiar with the OpenRaster spec.

It’s not like we didn’t have enough blending modes compatibility issues in free software already. To me it’s always sad to see teams disconnected from the ecosystem.

Not that Krita, GIMP or MyPaint teams would jump into action and implement the new modes (Krita team would, probably — they are big on blending modes). But getting involved into conversation early would help making more informed decisions. Hopefully this will be taken care of.

Apart from that, the new feature is very much welcome.

The Color Picker tool got a few improvements. It’s now possibly to set area to average colors from: from a single pixels to 9×9px region. Additionally you can pick color from the current layer of the whole image projection (all layers merged).

The Text tool now supports clipboard operations: you can paste a text from system’s clipboard or select and paste text from your current text object.

Developers claim that Pinta now uses much less memory. However a quick test reveals that Pinta still eats twice as much memory as GIMP via the Mono process.

There are various cosmetic changes like dropped shadow from image’s border, presumably to make better distinction between actual content and surrounding area. Additionally, 39 bugs were fixed.

While Pinta is growing into a nice little image editor, there are several major issues I personally have with the app.

One of them is the text tool and the general state of undo stack. In short, anything you do with text objects isn’t recorded in the history, and text objects aren’t re-editable. Any text you add to the image is set in stone as soon as you switch away from the text tool. You can only undo adding the text. 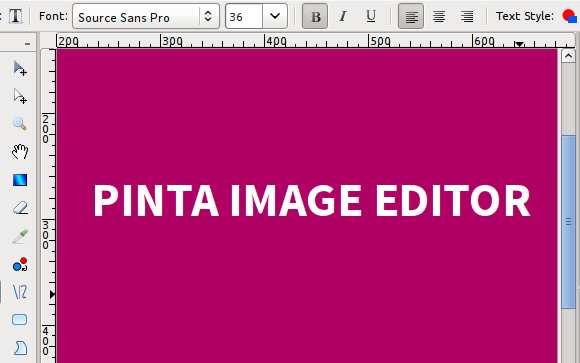 Likewise it’s quite easy to add shapes inside a selection that won’t be tracked by the undo stack, so you can end up with changes which are rendered directly into your layer and which you simply can’t undo.

The whole “you don’t need adjusting layer properties directly” idea taken from Paint.NET is a bit over the top, but I realize I’m not the target audience. Not having masks on layers is another major problem, but again, this might not be the deal breaker for the target audience.

Not being able to lock height/width ratio or just width means you can’t do even simple things like cropping images for blog posts fast enough. Try making a 600px wide screenshot centered around a dialog with Pinta, and then do the same with GIMP: you’ll get the idea. 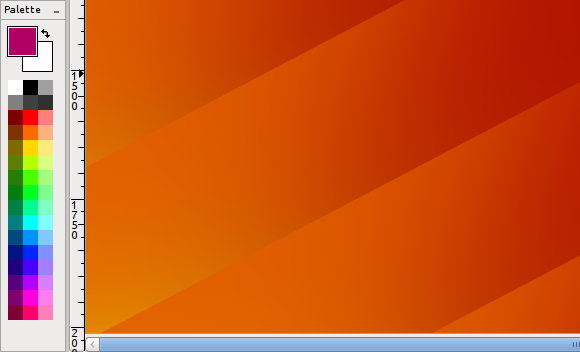 Finally, lack of palettes management means you need to pick your colors from scratch over and over again each time you start Pinta. Using Gpick for that could help, but unfortunately Pinta neither accepts color drag’n’drop in the main UI, nor loads/saves palette files.

That being said, Pinta keeps getting better. If 3rd party developers start making use of the new add-ins system, and all sorts of annoyances are dealt with, Pinta has very good chances to become the lightweight image editor of choice for people who think GIMP and Krita are an overkill for them. For some of those people Pinta has already become that very editor, I’ve no doubt.

Pinta is currently available in source code, a build for Ubuntu in a dedicated PPA, and both Windows and Mac installers.