GIMP 2.8 released, next version to get high bit depth precision

The new stable version features improvements in almost all aspects: UI, tools, painting features, resources. A detailed review is in works, for now please have a look at the official release notes .

Now, the even better news is that since few days internal pipeline of the development version can work in 16bit and 32bit per color channel mode, both integer and float. This finally makes high bit depth precision available and opens up high dynamic range imaging for GIMP. The announcement was made today by Michael Natterer and Øyvind Kolås at Libre Graphics Meeting in Vienna.

The precision switcher is in the Image menu: 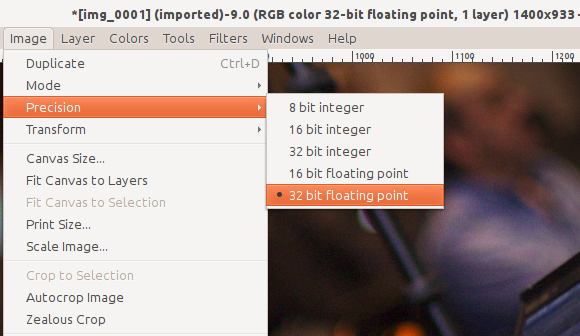 Both painting, color adjustment and transformation tools work in 32bit float mode. Additionally GIMP can load and save 16bit PNG images and save EXR and HDR files. The better file formats support was implemented by Simon Budig, one of the oldest contributors in the project.

While working on the GEGL integration, the team also revised their plans regarding support for indexed images which they initially intended to ditch. Instead they made operations on indexed images transparent.

What it means is that now you can apply Gaussian blur to images in indexed mode, or smudge them, or do whatever was impossible to do before.

Feature-wise 2.10 is likely to get Google Summer of Code projects from last year: Warp Transform tool, Seamless Paste tool and a new widget for size entry. Further plans for new features haven’t been decided on yet.

There are no time-wise plans regarding release of 2.10, but the agreement is to switch to shorter development cycles, so that hell could proceed burning sinners as planned, without freezing over every once in a while.