As someone who maintains social media accounts for a few free/libre software projects, one of the top questions I keep being asked is how/where to learn using this or that application. So this is an attempt to a definitive guide to various learning resources on Inkscape , free/libre vector graphics editor

Please note that I compiled this list based on my own criteria of usefulness. This basically means that I watched and read almost everything there is to watch and read, and then made up my mind if I think it’s worth recommending. Thus it’s inherently subjective. The list also covers only the resources in English.

That said, if you think I missed a useful Inkscape educational resource (the popular expression seems to be ‘you forgot’), please do link to it in the comments section!

With that in mind, let’s go.

One thing that has to be immediately pointed out is that most books on Inkscape are somewhat outdated and cover v0.47 and v0.48 (all books published by Packtpub, in particular).

It has a lot to do with how book publishing works, and also with a 5 years long period between 0.48 released in 2009 and v0.91 released in 2015. Writing a book usually takes at least half a year, and publishers want to be sure that people who buy the book will actually have the software to go along with (it’s why there aren’t many new GIMP books, too).

Nevertheless, while there’s always a ton of improvements in each Inkscape release, all basics are the same even 10 years later, and many advanced techniques are the same as well.

The online version of “Inkscape: Guide to a Vector Drawing Program” book by Tavmjong Bah is probably the only exception where you get up-to-date material. Even though Tav is very busy with working on Inkscape and participating at the SVG W3C working group’s activities, he does his best at maintaining it.

The book works best as a reference rather than a user guide. You may not like Tavmjong’s dry technical style of writing, but he is extremely thorough, and for years it was pretty much the only comprehensive guide to Inkscape. Which is likely the reason it has been linked to right from the Help menu in Inkscape.

The online version is considered 5th edition and was last updated in 2017, while the last printed version is the 4th edition from 2011. You should keep that in mind, if you go for the hardcopy instead.

Dmitry Kirsanov’s “The Book of Inkscape” is another book written by an actual Inkscape developer. Dmitry contributed numerous improvements and several new tools in the early days of Inkscape, under a nickname.

Released in 2009, his book is a likewise thorough user guide that can also be used as a reference, but includes a number of quick tutorials to help you practice using Inkscape. One particularly great thing about this book is that Dmitry makes a point of using Inkscape efficiently, via keyboard shortcuts. Which really does help mastering this software.

The author’s original intent, as explained in the preface, was to cover all Inkscape features and evangelize vector graphics. After 14 years of using Inkscape, I don’t think I need much convincing, so no particular opinion there. But covering all features is what Dmitry did brilliantly. Although the book is 9 years old, it’ll get you going just fine.

It looks like Udemy is currently #1 resource of structured educational video material on Inkscape. As of February 2018, the platform provides over 20 paid Inkscape-focused or Inkscape-related courses .

I’ll be honest with you: I haven’t watched all available courses on Udemy, as it would put a dent on my budget. But these are the two I picked and watched, based on user-submitted reviews.

“Inkscape For Beginners 2016/2017” by Michael DiGregorio will work best as an introduction and a reference to Inkscape’s toolbox and some basic features. Michael meticulously covered what each tool does. But don’t expect to get much creative during the course, and there will be no course assignments. 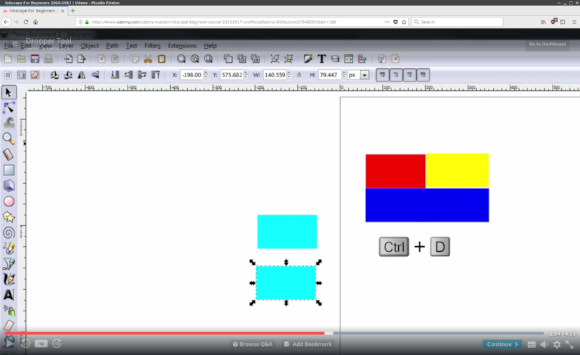 Also, you won’t learn to draw anything fun, unless it’s what you do additionally to the course. Another nitpick is that, personally, I found the quizzes not entirely representative of the information I was supposed to learn.

Still, for a video reference in features in a completely new application, this will work quite OK. And since audio quality is good, and Michael is a native English speaker, the course is quite watchable at 1.25x speed (stretching it to 1.5x might or might not work for you).

Since a few weeks, there’s the second part of that course available. It covers more Inkscape’s feature like live path effects, extensions, and more.

István Szép is currently the most productive Inkscape instructor on Udemy. He authored and co-authored 8 courses that involve using Inkscape. “Learn Inkscape now” is his top selling Inkscape course that is a rather good introduction to the application.

The benefit of István’s intro course over Michael’s course is that you get to make actual simple drawings in almost every video. It comes at the expense of not learning every single option of every tool though. So that’s a choice you would have to make.

István is a native of Hungary, and as a non-native English speaker myself, I was quite able to follow his instructions, but judging by reviews, several students had a problem with his pronunciation, so there’s that too.

Two out of three resources that I can wholeheartedly recommend are devoted to using Inkscape for game design. It sounds like a niche thing, but the fact is that both authors can teach you how to use Inkscape to draw something that looks nice and can be done in maybe a dozen of steps. Isn’t that what every beginner needs?

Chris Hildenbrand is one of the few people who exploded the Inkscape scene in the early 2010s by consistently releasing high-quality tutorials for beginner game designers , all requiring some basic skills and knowing your way around the application.

Some nicer index of his older tutorials is available on Zeef.com . Next to tutorials, Chris also provides great feedback and advice to his readers.

Olga Bikmullina is another author of popular Inkscape tutorials. She’s also a regular participant at the annual CG Event conference in Moscow where she talks about using Inkscape for game design (both the good bits and the bad bits).

While she hasn’t written much for the past few years, her website has amassed enough easy-to-follow tutorials to keep you busy for quite a while.

Over the years, Envato published a bunch of tutorials on Tutsplus.com , mostly by Chris Hildenbrand and Aaron Nieze. They vary from tips-and-tricks advices to step-by-step tutorials to draw something like this adorable hedgehog :

Currently, Nick Saporito is probably the most popular author of Inkscape video tutorials, with over 150 Inkscape clips on YouTube. His videos are usually very easy to follow and focus on typical use cases: lettering, designing logos, making posters, drawing elements of infographics, and suchlike.

He also makes likewise good GIMP tutorials. All videos are neatly grouped into a variety of playlists. Check them out here.

The Grafikwork channel on YouTube can be a great source of learning new skills for illustrators. There is no narration, and all videos are timelapses. So it will be most useful for Inkscape users who have a good grasp of how various features work, but can’t easily go from a bunch of basic shapes to a complete illustration.

The author is from Ukraine, and until fairly recently videos in the channel showed Inkscape in Russian. Those are still more or less easy to follow, since the author mostly uses basic drawing tools.

Grafikwork has over 80 tutorials currently and is usually updated once or twice a week.

Siddhesh’s “Sids Art - Inkscape And Drawings” channel has over 70 timelapse tutorals on creating illustrations with Inkscape. A lot of them focus on flat design.

Swapnil Rane’s MadFireOn channel mostly features tutorials on designing flat art backgrounds, but also some logo and icon design tuts. Commentary is more or less OK, but I really wish he got a better mic.

Ardent Designs channel has over 130 voiced video tutorials for both beginners and experienced Inkscape users. Usual topics are icons and logos. Visually, they are a bit of hit and miss, but they are commonly easy to follow, and narration is quite OK.

Apart from making structured video courses, István Szép put a dozen of timelapses on YouTube. They are quite fun to watch and help getting into the head of a designer and illustrator.

Around 2015, Chris Hildenbrand decided to up his game and make video instructions on using Inkscape for game design. He ended up creating a little over a dozen of videos that are very useful, but a little painful to watch, since the text wasn’t scripted.

Butterscotch Shenanigans channel isn’t focused on Inkscape, it’s mostly about games they make. But Inkscape was one of their major tools during the production of Crashlands . So there are currently 9 illustration tutorials on just that: various illustrations for the game.

If you think you can learn from other artists' workflows (and funny commentary), do check them out. Please note that unlike most channels in the review, they haven’t released any new Inkscape tuts since 2014.

One thing I think I need to stress strongly is that sticking to educational material on just Inkscape is probably the worst mistake you can make early in your career.

People who use other software make great art, there are workflow insights that can be easily transferred from app to app. And trying to replicate such tutorials with Inkscape will actually help you learn Inkscape better.