What is it good for? Graeme lists a number of possible use cases:

If you’ve been wondering, how Graeme is supposed to get compensation for his passionate professional-level work on free/libre color management tools for the past decade, this might just be it: a commercial app for the Android platform where there is virtually no competition between color management related tools. 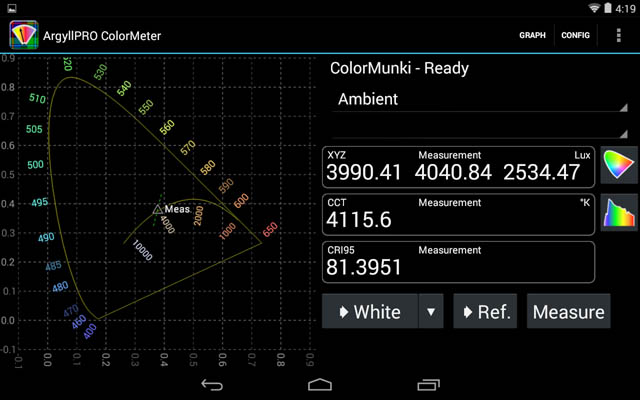 Spectropocket is a lot like ColorMeter (or vice versa), but you are paying for additional hardware ($1,299 for the whole solution), and measurement devices support is limited to i1Pro, i1Pro 2, and ColorMunki Design.

Datacolor SpyderGALLERY, in return, seems to be an app whose developers were of two minds what they were going to do with it. This is both a calibration/profiling app, hardcoded to use Spyder 4 colorimeters only, and a photo gallery viewer with a CMS on/off switch (the same applies to X-Rite ColorTRUE, really).

As you can see, ColorTRUE/SpyderGALLERY vs. ColorMeter/Spectropcket are a bit like apples and oranges. And between the four of them only ColorMeter is truly omnivore in terms of vendors and models supported. 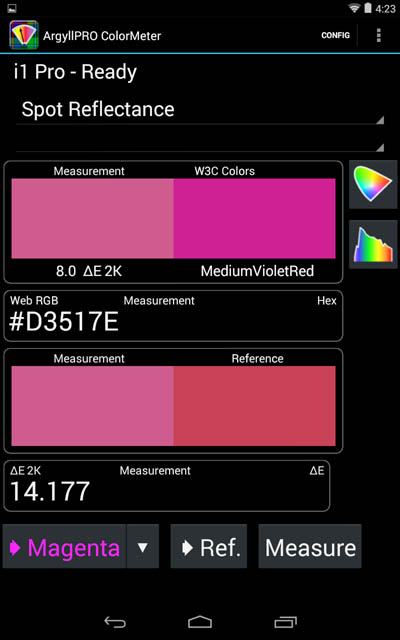 It took Graeme two years to complete and roll out the first public release, given that it was a one-person project, as well as all the work involved with supporting ArgyllCMS and writing new features for it, such as video profiling & 3D LUT creation support. Developing for an entirely new platform wasn’t easy either. Graeme shares:

I had instruments working two weeks after I got my Nexus 7, but the learning curve was fierce — it was 9 months before I felt I knew my way around the UI code to some degree, and I needed to put enough into the app to at least show the potential of it. Inventing pinch-zoom graphs with automatically scaling non-linear axe labels takes time.

The Android API is both good/easy & hard/buggy. Do it in just the right way, and everything is easy. It mostly works as advertised. Stray off that path, and you’re grepping through the Android source code, desperately trying to figure if it’s your misunderstanding or bug, or whether it’s a bug in Android. Stackoverflow is the absolutely vital resource in all that.

Android is missing things you would think should be built in, like gesture sortable lists, or automatic feature scaling with screen size, so I had to invent my own code to do this sort of thing.

It’s important to note that the will be no iOS version for those of us with iPads, because Apple doesn’t make it easy to access USB devices. Over to Graeme again:

I suspect [X-Rite & DataColor] are a bit stumped by iOS not having USB. They can’t bring themselves to give up on 60% of the USA market. X-Rite is big enough to solve the problem with brute force — either fit new instruments with WiFi/Blue tooth, or make a USB host adapter and join Apples HW development program. They may well be working on such a thing, so I was keen to beat them to a release.

At AU$110, the app is not exactly cheap, although the unique combination of features and platform they are available on might just make up for the price to you. And there is a demo version of the app that is “fully functional, except that it shows a sequence of 8 pre-determined readings instead of the true measurement values from your instrument”.

You might have already seen a similar revenue model with e.g. LibRaw which is the base for RawDigger and FastRawViewer — all three projects being made by LibRaw LLC. This keeps the company afloat (although, frankly, both LibRaw LLC developers have other successful businesses), and GPL makes it possible for projects like digiKam to provide reliable support for RAW files.

It’s going to be interesting to see how getting into the mobile development business with ArgyllPRO ColorMeter will work for Graeme who’s among very few people responsible for making color management on Linux just work.