Being able to handle metadata in photos is critical in professional environment. The team recognized that early on: getting real metadata support into GIMP is an initiative that’s nearly as old as moving GIMP to the GEGL image processing engine.

Hartmut Kuhse finally unlocked the achievement by providing a rather complete patch, and Michael Natterer is now actively improving it in the main development branch. What does it do, exactly? 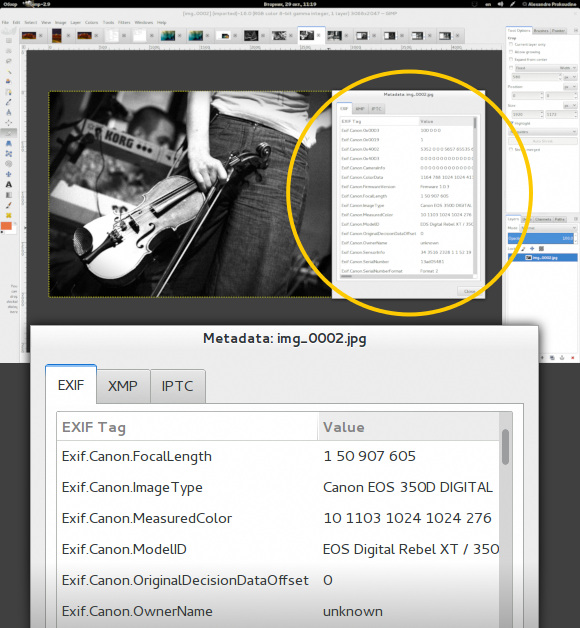 As you can see, it is now possible to view Exif, XMP, and IPTC metadata embedded into JPEG, JPEG2000, PNG, TIFF, and PSD images. The metadata dialog currently resides in the File menu, but it is likely to be relocated to the Image menu soon.

Just reading and viewing metadata wouldn’t be much fun though, would it? So now when you export to TIFF, PNG, and JPEG, you can choose what kind of metadata you are willing to preserve. And it will actually be saved. 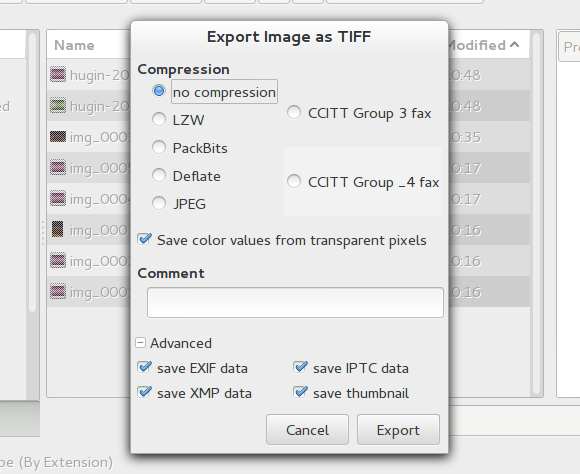 Thanks to this no less than 12 metadata related bugs have already been closed. And yet, this is a work in progress, with more features and polishing to follow.

Now, about the technical part. The metadata code relies on a rock-solid foundation — a popular tool called Exiv2 that’s used for reading and writing metadata in virtually every free/libre photography application.

However, GIMP doesn’t use libexiv2 directly. Instead it uses a GObject-based wrapper called gexiv2 created by Yorba, developers of Shotwell photo management application. Michael is in touch with gexiv2 developers and already sent his first patch for the wrapper.

Also, Commons Machinery team is quite interested in getting GIMP to support preservation of metadata in compound works of art. They already provided a similar patch for Inkscape regarding SVG. And now that GIMP can read XMP, it’s possible to make this happen.

GIMP 2.10 is going to be the first version to have advanced metadata support. For now you can use nightly builds for Windows , or a PPA for Ubuntu .

IPTC appreciates the support of our metadata schemas – http://www.iptc.org/site/Photo_Metadata/IPTC_Core_&_Extension/ – as actually each semi-professional and professional photographer is using them. This opens a new arena for Gimp.

Stay tuned for more news on that.