This is not the first attempt to implement the exporter: there were at least two more, by Marty McGuire and by John Cliff.

How to use it

With this extension saving automatically extruded shapes as .scad files from Inkscape becomes a two-step procedure.

1. After installing the files to an extensions directory select an object and use the Extensions / Generate from Path / Paths to OpenSCAD command in menu. 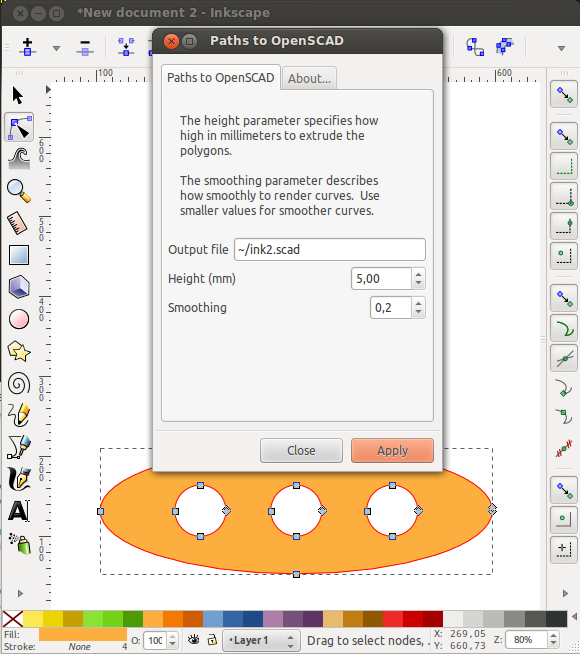 The OpenSCAD converter has quite minimalistic options

Note that if you don’t select an object, the whole page will be exported.

2. Tell the extension where to store the file and how to name it, pick extrusion width and click Apply. That’s it.

All you need to do now is open the file in OpenSCAD and press F5 to render. 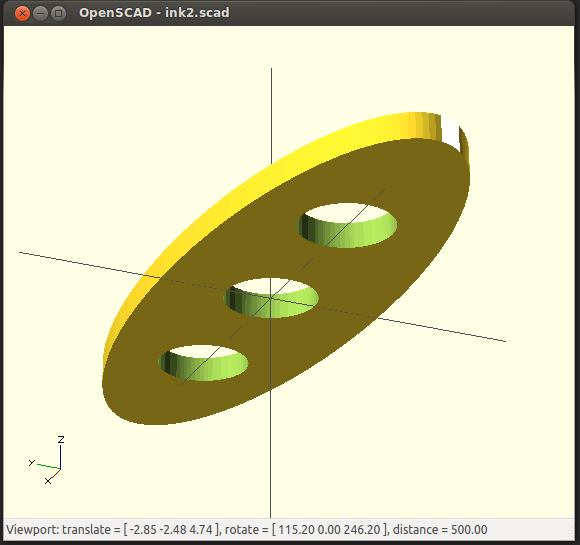 This looks like a much simpler workflow that what people had to deal with, like in this case where going from photo to 3D printed jewellery via Inkscape looks like quite a bit of a headache.

Every story has a background

It’s interesting that Dan Newman, creator of the extension, has quite an impressive track record. Not only he participated in creating drivers for Egg-bot, an open-source art robot that can draw on spherical or egg-shaped objects. In the past he also contributed a lot of code to the driver framework in Ghostscript, and some of his projects, like PDMF-FAX, date back to 1980x. 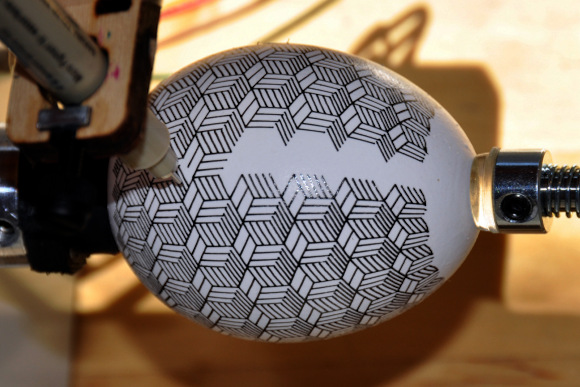 Projects he’s currently involved in are the Egg-bot and the Jetty Firmware (3D printing). He’s also looking forward to receiving a Polargraph from Sandy Noble at which point he expects to start contributing there. Dan became aware of Sandy’s work when that camp started using the TSP art tools that Dan put together.

OK, but where does OpenSCAD fit in? Dan explains: “OpenSCAD is a great, open source tool for doing 3D solid modeling. Since it is primarily a programming language it appeals to me, a programmer. Also, it’s really easy to exchange designs and tweak them”.

Indeed, OpenSCAD gets all kinds of fun uses, from 3D printing and teaching geometry to converting Minecraft landscapes to STL. Here is a fun video with a toy catapult designed with OpenSCAD by another Thingiverse member:

Dan says: “My daughters, now ages 11 and 13, use OpenSCAD.  It’s a great tool for getting children to think analytically about geometry and design. Rather than drag and drop two or three dimensional figures and click a button to combine them, they have to stop and think more deeply about what they are trying to achieve and then put their ideas forth as geometric operations“.

If you are interested in OpenSCAD, you can learn more about it from Makerbot tutorials.