After over a year of work LibreCAD 1.0.0 is out with few user visible, yet a whole bunch of important internal changes.

LibreCAD is a free traditional 2D drafting application available for Windows, Mac and Linux. It features pretty much everything you would expect from a generic 2D CAD, including command-based drawing, dimensioning, parts library etc.

LibreCAD is a free traditional 2D drafting application available for Windows, Mac and Linux. It features pretty much everything you would expect from a generic 2D CAD, including command-based drawing, dimensioning, parts library etc.

The project was started during summer of 2010 by Ries van Twisk, a freelance web developer. From the original announcement:

When I was working on my CNC machine I was slightly irritated by the fact that I couldn’t send my design directly from QCad to EMC2. I had to save the file, load it into dxf2gcode, save it back again and load it back into EMC2. This looked rather time consuming. And as such, I decided to make a little CAM addition to QCad Community Edition.

However Ries discovered that the community edition of QCad was based on Qt3 that was aging even in mid 2010, so it didn’t make a lot of sense writing new features on top of that.

Since QCad was effectively under control of Ribbonsoft, Ries started a new project initially called CADuntu and quickly got absorbed into porting everything to Qt4 and cleaning up QCad’s intestines.

In November/December 2010 he ran a poll to find out what new name the community would pick, and LibreCAD turned out to be the winner. Around that time the team started growing, new people joined the project to improve various aspects of the application. 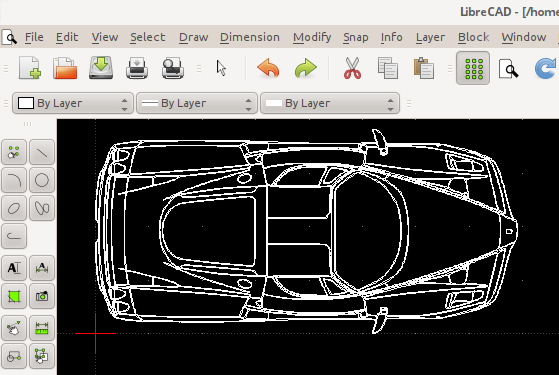 The poll was appended by a call for new branding package which resulted in a new logo, new splash screen and a set of new icons.

In May the team set up a Pootle based translation server to help translators updating localizations. However, most translations are still not 100% complete.

In October the team got a notification from Ribbonsoft who insisted that the team was to remove fonts and documentation which weren’t published under GPL. So LibreCAD team removed them and introduced new font format called LFF that is backwards compatible with original CXF fonts.

Overall, the visible changes between QCad Community Edition and LibreCAD are:

The team has much more visible progress in the LibreCAD v2 branch, including, but not limited to:

Notably, the CAM plug-in that started all the fuzz is still to be implemented ;-)

By the way, one of the LibreCAD developers recently started writing a new C++ library for reading and writing DXF files. It’s called libdxfrw. So this part of the project is easily reusable.

Despite of rise and shine of DraftSight, LibreCAD is quite a fun project to watch along with FreeCAD, an OpenCASCADE based mechanical engineering and product design CAD/CAE/PLM application that recently got an update as well.

My impression is that these days free CAD software in general is a bit of an underdog. It’s quite possible that a holy marriage to personal fabrication and open hardware communities would do it good. What do you think?