Patience is one tough lady: after 13 years in development, free 2D vector-based animation application Synfig Studio finally gets the golden badge of v1.0, delivering a sleigh of improvements and new features.

The new version has a handful of major changes and improvements. Many of them were crowd-sponsored by Synfig’s community in 2013—2014. Here are just some of them:

What did it take them so long to release 1.0 then? Well, among many things, there’s a historical heritage involved.

Going back in time

The project started in 2002 as an experiment by Robert Qattlebaum in creating an animation tool that would automate tweening. In 2004, Robert launched Voria Studios, an animation studio that used Synfig as its main in-house production tool.

Even though Voria didn’t last long (it was closed later same year), its first short animation movie, Prologue, was so good that not only it got positive feedback at both AnimeExpo 2004 and ComicCon 2004 — the scenes were used to demo Synfig for years to follow, while Synfig itself inherited the logo of Voria.

In an interview to OSnews, published in early 2006, Robert stated:

I decided to open source Synfig because I had reached a point where I relieved that there was no realistic chance of being able to successfully put Synfig on the market. Ultimately I’d rather everyone be able to use Synfig than no one, so I decided to go ahead and release it to the world. It was actually always my intention to open source Synfig if my business failed.

Indeed, after the studio closed, Robert had different options, and one of them was getting some big company interested in Synfig. He spoke to Apple, and they refused, so during summer 2005, he released the code under GPL. Interestingly, two years later Apple hired Robert to work on QuickTime/CoreVideo, then GameKit, then Display Systems.

From the very beginning, Robert chose a rather modest release numbering scheme for the project. The first release of Synfig as a free/libre software was v0.61.00. For the next 9 years, this scheme was maintained, even after Robert left the project in early 2007.

Now Synfig is finally where it should have been years ago: at v1.0.

According to Konstantin Dmitriev, the next big step for the project is improving rendering performance, which is why the team is now refocusing on OpenGL support.

If you are really curious, there are two Git repositories to follow: Exhibit A is a branch of Synfig where main development work on OpenGL is being done, Exhibit B is a code repository where Ivan Mahonin is doing various related tests. Note, however, that for end-users it’s just too early to go knee-deep into unstable code right now. 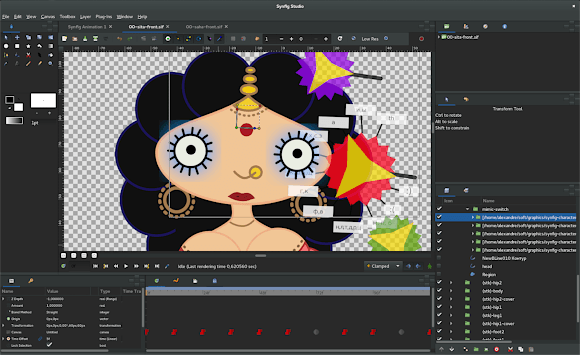 There will be further user interface improvements, but until the whole OpenGL thing is done and out of the way, they are likely to be minor. Mostly it depends on how much busy Yu Chen (main UI code contributor) will be.

We used to “sell” priorities before, but we can’t do it again yet, we only work on OpenGL right now. We could try to raise funds with this particular feature in mind, but that only makes sense once we have a working prototype. It would be risky though: since hardware acceleration on multiple platforms is involved, we expect all sorts of pitfalls, especially on Mac.

Nevertheless, you can still support the project financially by either donating or paying for a training package which will soon be updated to match the changes in v1.0.

It has to be said that while monthly crowdfunding campaigns were ongoing, the team used to be a inch away from failing nearly every time.

Admittedly, the community of animators on Linux isn’t all that large to safely secure the sponsoring of the project, and Windows/Mac users have other affordable options, which might explain why commercial-grade showcases of Synfig are a rare beast. Hopefully this is going to change now that v1.0 has been released.

You can download Synfig Studio 1.0 for Linux, Windows, and Mac.