Annoyed with much dated networking stencils in free diagramming software? Mark Oellermann of VRT, an Australian systems integration company, fixed that for you.

The situation with diagramming stencils for free software is no less frustrating that the situation with the actual diagramming software. If you do a lot of this kind of technical illustrations in your line of work, chances are you either use Visio-like proprietary software, clench your teeth, shut down your sense of beauty and get on with Dia’s set of shapes, or maybe ransack Open Clip Art Library for anything usable .

Strictly speaking, diagramming is about getting the job done. However, the bling does help selling projects to customers. And that’s where Mark’s contribution to LibreOffice is so important.

The collection he designed contains 200+ stencils in light and dark variants: routers, server racks, printers, desktops, laptops, IP phones — pretty much everything you need, if you are in the systems integration business, or if you are responsible for IT infrastructure in your company. It doesn’t exactly bring the art of flowcharting to the next level, but it does provide a sensible alternative. 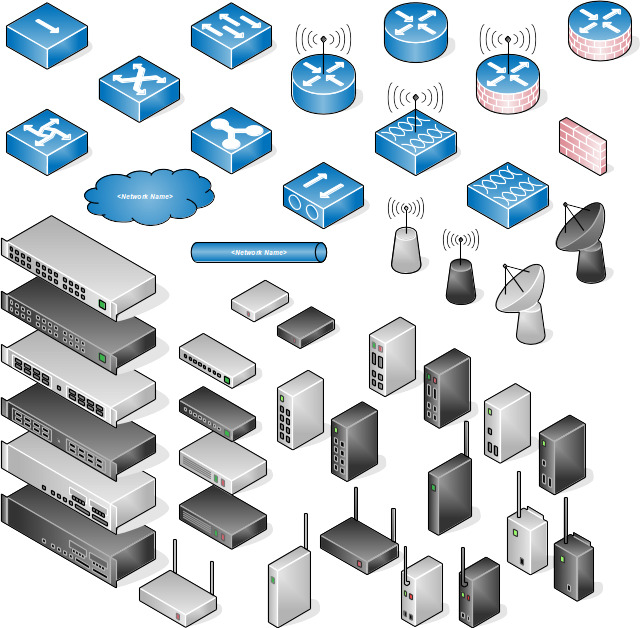 I work for a small company that moved to LibreOffice and needed to create the sorts of IT networking diagrams you often see done with Visio’s isometric shapes, but couldn’t find any decent shape libraries in a suitable open format.

After much investigation I realised that it wouldn’t be too hard to produce something ourselves on par with what MS had done for Visio, so I dived in and some 2 years later we’ve got near 200 symbols, available on CC terms.

Stencils can be installed as both OpenOffice.org and LibreOffice extensions.

Later this year Mark expects to ships the stencils in SVG and PNG, so that once Inkscape 0.91 is out, people could easily plug new shapes and use them (the upcoming release is featuring a Symbols palette), or easily convert them to Dia shapes.