Free Calf audio and MIDI plug-ins get a major update

Two years of work and 20 new plug-ins — was it worth waiting? The much anticipated new release of Calf audio plug-ins is out for all Linux-based music makers and sound engineers.

The package now includes nearly 30 audio and MIDI plug-ins in LV2 format, from synthesizers and effects to all sorts of channel processing plug-ins for mastering.

Let’s talk about each of them.

Around 2010 the plug-ins suite got a much sexier user interface which better reflects modern design trends. Admittedly, the trends haven’t changed much in the last 15 years: it’s skeuomorphism all the way for audio software.

And yet, it’s not just about shiny buttons tat look exactly as on your hardware panels. A more careful examination reveals that readability of certain UI elements has improved, like here in the VU meter:

The bundle finally got three multiband equalizers: 5 band EQ, 8 band EQ, and 12 band EQ. All of them have highshelf and lowshelf controls with parametric sections in between.

Mono Input and Stereo Tools. If you have a mono track that you want to process with stereo plug-ins, just use Mono Input and add any of further plug-ins above in the Ardour rack. Use Stereo Tools to convert M/S to L/R and so on.

Bass Enhancer and Deesser are one of the classical un-screw-up-izers, and even here the developers managed to go beyond the “single slider is all you need” paradigm.

The new Exciter plug-in is whee bit less common, but quite interesting regardless: it adds range-restricted harmonic distortions to create a more crisp sound.

Pulsator produces an effect of alternately bumping up and down volume of L and R channels based on an LFO.

Sidechain compressor and sidechain gate got respective multiband versions, with a configurable crossover to divide the frequency range into bands. There’s also a simpler version of the gate available now (so there are 3 different gate plug-ins in Calf). 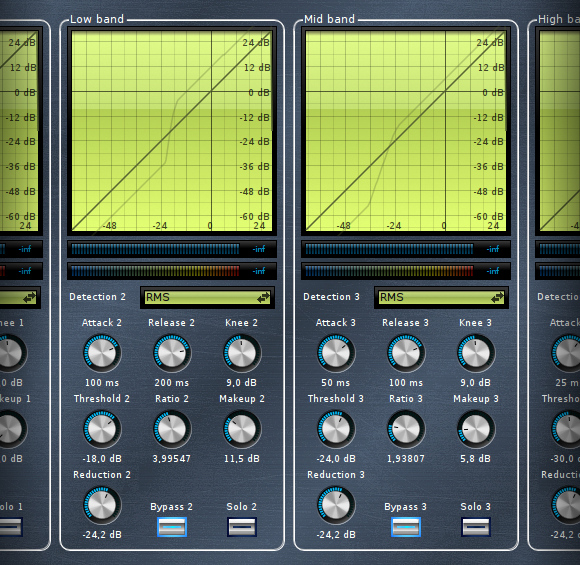 The plug-ins suite now also includes Limiter and Multiband Limiter plug-ins. The multiband version uses pretty much the same crossover as the Compressor and Gate plug-ins.

Several pre-existing plug-ins have been improved. For instance, the Vintage Delay plug-in got new Width and LR/RL modes and doesn’t burst with noise on enable/disable anymore.

There’s another new plug-in in the bundle, but this time — for analyzing frequency response and phase corrrelation. Here is a video showing all the features of this plug-in.

You can just drag the Analyzer in the channel strip to switch the input source. If you are an Ardour 3 user, for basic analysis you can also use the stock analyzer available for each plug-in.

Both Monosynth and Organ were improved, but Monosynth clearly got the better of developers' attention. Here is the list of changes in the plug-in: 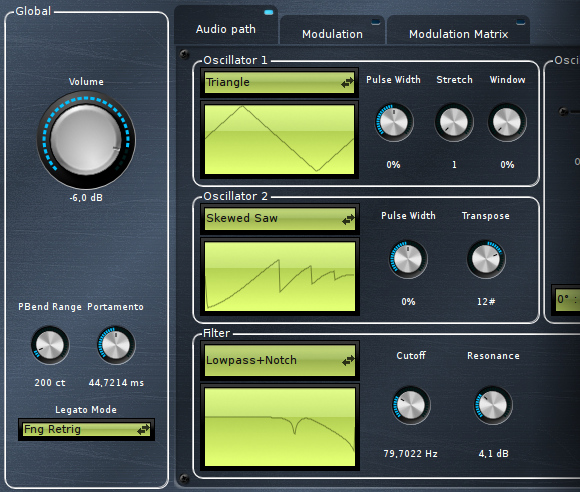 Organ only got configurable vibrato: apart from allpass vibrato you can also use several variations of scanner vibrato now.

Unfortunately FluidSynth (UI for FLuidSynth engine that uses SF2 samples) and Wavetable didn’t make it into the official release (the code is still there, though). You can build them by passing –enable-experimental argument to ./configure, however only FluidSynth will work.

The JACK host applications that’s part of the bundle got a few changes too. Starting with this version it can save and load sessions. The core of the host was better separated from UI too, which makes the host more robust.

As you can see, the user interface also got an update.

As LV2 spec keeps maturing, Dave Robillard spreads his fatherly love all over a number of mainstream projects. Calf is one of those projects, so it gets updated to match the current state of affairs in the dangerous LV2 land.

In short, Calf plug-ins support things like LV2 state quite well, which means your basic LV2 host such as Ardour will reload all the plug-ins exactly as you left them the last time your worked on your project.

The download bump you see in v0.0.19 is mostly due to illustrated documentation that’s finally avaiable for the plug-ins. A typical article on a plug-in explains functionality, overviews the meaning of each control and provides various tips.

Not all of the plug-ins are extensively covered yet. This is something that will hopefully be improved in the next releases.

Finally, the project got a completely new website with music demos, screenshots and a quick tour.

The team is already working on further improvements for the user interface.

For example, you can do more edits directly on frequency graphs now, like setting up crossover by dragging band handles.

It’s quite reassuring that the team has grown in the past few years. With luck we’ll see more exciting work quite soon.

The plug-ins should work just fine in any LV2 host such as Ardour or Qtractor. A fork that provides fallbacks to LADSPA and DSSI for users of more conservative hosts is being maintained by falkTX.