In early 2010, Michael Zarimis published a video on YouTube that demoed the first prototype of Linux-based Misa digital guitar with a touch interface. Did you ever wonder what happened to the project? Well, we did :)

Kitara is a guitar-shaped MIDI controller with a built-in synthesizer with a 24 fret neck, no strings and a touch surface in place of the soundboard. Oh, and it’s running heavily customized Linux on ARM9. 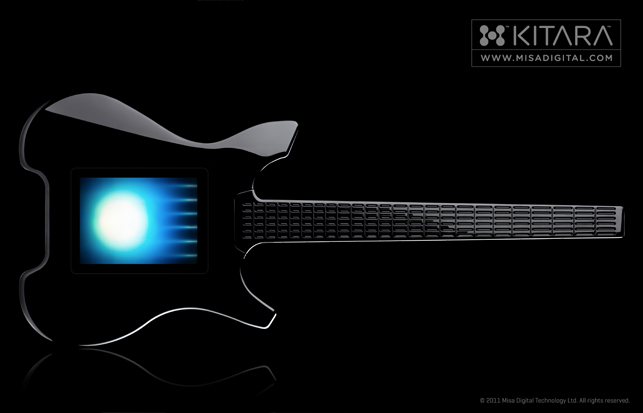 The first video was soon picked up by media, and it looks like a terrible lot of people didn’t get the idea right. Nevertheless there was enough of interest to gradually turn the project into a small business.

Indeed, Misa Digital started growing and, as you can see, even had a booth at NAMM, both in 2011 and in 2012. In the video below Mike actually does a very good demo of the instrument. Do check it out if you are still puzzled (I bet you are).

So why is that of interest to LGW? Linux inside, geek outside? Well, not really. It’s about a certain trend in business and culture, and it has a lot to do with the whole DIY thing.

Arduino plays a huge role there, having given life to many open synths (check the relevant section at CDM — Peter Kirn really has a thing about DIY). So does Korg who opened up schematics and stuff for monotribe and monotron and keep updating those.

But right now I’m talking about a slightly different kind of companies.

The first one would be monome who made a revolution with their open matrix-like controller. The inception of monome managed to make quite a splash in the electronic stage and eventually led to cheaper consumer products such as Novation Launchpad. Those products, strictly speaking, are kind of contradictory to the point of monome whose authors, Brian Crabtree & Kelly Cain, are big on local suppliers and domestic production.

Another example would be Eigenlabs who are extremely open with regards to software development and definitely deserve a story all to themselves. If you are not familiar with Eigenharp, do check out some videos on YouTube. It’s an amazing instrument.

Despite of some bloopers (such as the whole Cremona violins craze) instruments had always been open to hack on, and the way Black Boxes crawled in to build a nest and spread around can be seen as a danger imposed on our culture (especially if you are of radical persuasion). It certainly caused guerilla software and hardware to appear (hello, Patch Editor ), partially due to design limitations.

But when hacking on instruments to improve them is built into the concept, your electronic instrument becomes truly yours. This is where you really start owning it again. This is basically what fellow Constant project calls “Reclaim your tools”.

Even though Misa Digital Kitara isn’t actually open hardware, with its source code being open to hack on it still fits the concept like a glove. So LGW ventured to ask Michael Zarimis a few questions.

In two years you went from a single developer working on a hobby project to a small expanding company that has a booth at a major industry tradeshow. How does it feel?

I have an overwhelming feeling of responsibility, haha. At Misa we are very passionate about our instruments, and our customers around the world share our vision which is very cool.

So to be able to keep the faith and build a strong brand, given we are a small team, we need to work extra hard to prove to everyone our instruments are worthy of the stage and studio.

You’ve been to NAMM this year again. What are your impressions? What was the most emotional experience for you?

I love seeing people that can pick up the Kitara and play something incredible on it instantly. There’s a certain type of mindset you need to have to do that. I think for starters you need to be open to new technologies and you need to have an open mind to different types of music. That is my favourite thing to see at NAMM.

I don’t like having to explain why the Kitara exists, which is a question lots of people ask at NAMM! But when someone comes along and just “gets it” — that is the best!

The first version of the embedded system was a stripped down Gentoo Linux. What I know from reviews is that you release updates at least once a month. How would you summarize changes since then?

The very first prototype used Gentoo, but this was changed when we released the product. Since release we have added many features including new play modes (at the request of customers), a new synth effect (bitcrusher), the ability to change the spacing between strings, a “scene management” tool so that you can instantly load different patches, and more.

In October you released source code of firmware, and in early January you uploaded Misa SDK. What kind of 3rd party development are you interested in?

Related to the Kitara, any additional functionality is good to me. Our forum community has been talking about lots of new ideas like arpeggiation and sequencing.

What I see with new experimental instruments and controllers is that small companies behind them tend to be quite open regarding their intellectual property. Do you think it’s something to do with the size of an enterprise? Or maybe we “simply” passed the point of no return regarding how business is done?

It’s natural for the older and larger companies to be sceptical about releasing their source code open. After all, they invest a lot of money in to salaries to write code and it seems crazy to release it for free. This is a very traditional business mentality, where the goal is to maximise revenue and that is all. 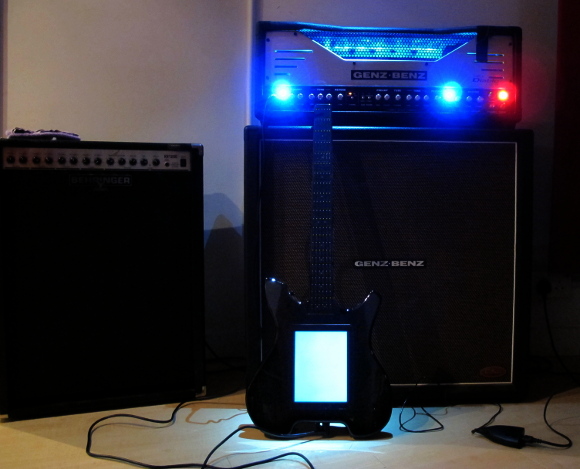 For the smaller companies like Misa, the goal is different. As well as earning income, Misa is pushing a new product that has never existed before. We need to build a new community and a new way of looking at things.

To gain this acceptance from other people and companies, we need to make it as easy as possible for them to get involved. And one of the ways we do it is making our code open source.

So, every time we release code, we are actually contributing to the further development of the digital guitar concept, rather than just Misa.

What key aspects of the firmware and the instrument itself would you like to improve in the forseeble future?

The Kitara is designed to be modular and the neck itself is very easily removable (in fact, it slots out like a cartridge). So, based on feedback from users at NAMM and customers, we are designing new neck types to cater for different styles of playing. I’m really excited about it! :)

The more I develop the Kitara in my mind, the less and less it is like a guitar. So some of the design decisions made early on, like 6 rows of buttons and 24 frets, probably weren’t necessary. For example, if you are playing a spacy monosynth sound with lots of glide, you probably only need 3 strings, and extra fret spacing. Just to break the paradigm further, which is very important in developing the Kitara.

Do you see the fretboard eventually becoming a touch surface as well (when it doesn’t cost like an arm or a leg :))?

When you do that, it becomes a different instrument again. It would be impossible to play when the tactile feel you expect from frets is missing. However, you would play it a different way. Such a neck would be great for sliding, like some type of futuristic lapsteel. Actually, it would be great. But right now, since the Kitara’s touchscreen already can do that sort of function, it is not the priority.

What was the biggest challenge for you?

The biggest technical challenge was sourcing and integrating the multitouch screen. Especially when the development was happening, multitouch was still a very new thing and not easy to get access to.

People seem to be more relaxed about new instruments that can be described as “nothing like we know” (e.g. Eigenharp). But since Kitara still looks quite a lot like a guitar, presumably, that causes some knee-jerk reactions. Can you tell from customer reports whether they mostly manage to get past the “Guitar with knobs on” stage?

Yes. In general, customers that expect an acoustic guitar “simulation” type of product will not get what they expect. But we do not market the Kitara this way — we really focus on getting electronic sounds and ways to do things that are not possible on electric/acoustic guitar. 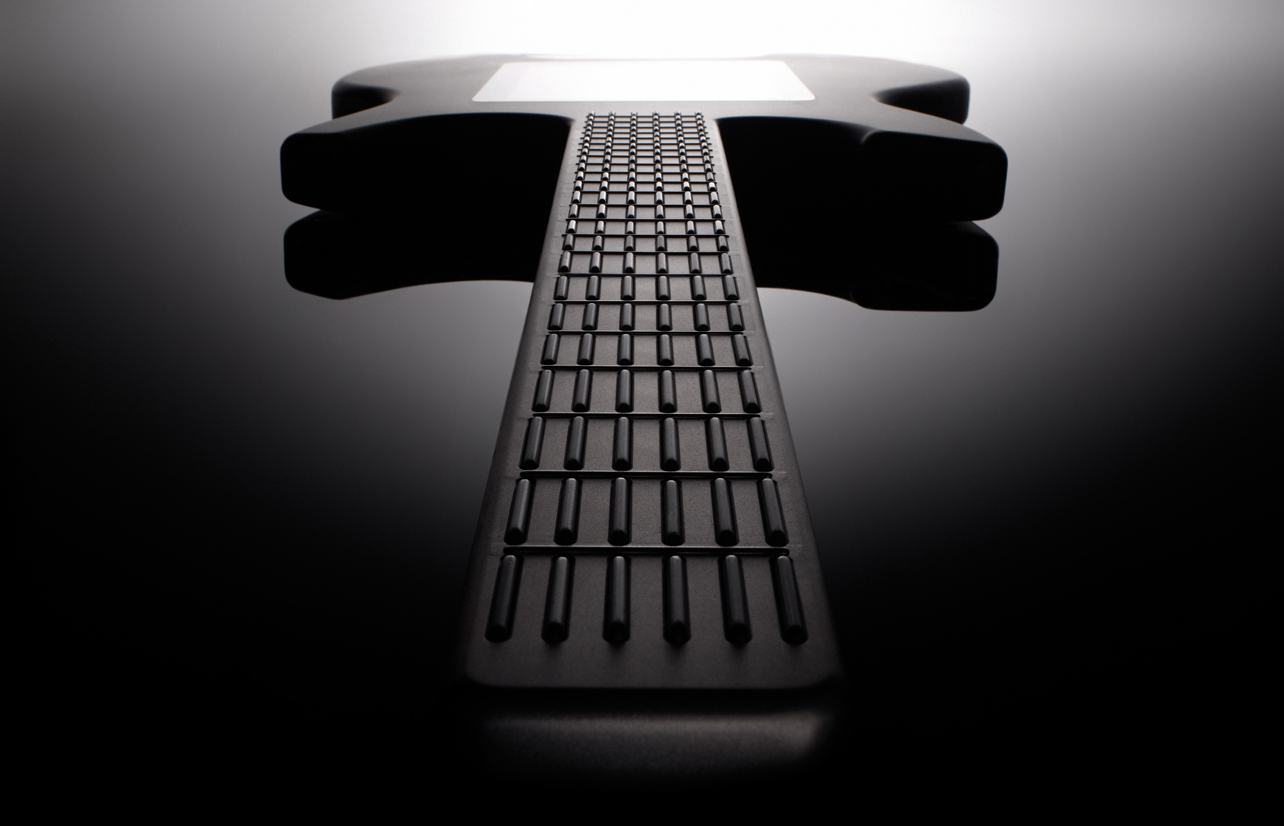 For customers that understand this from the beginning, they really shine with the product. And that is very cool to see!

You’ve built a lot of customization possibilities into the instrument like assigning controllers to particular touch gestures. How easy is it to share customizations with fellow musicians? Do you see a lot of activity there?

All the different customizations can be saved in preset files which can then be downloaded to your PC and shared with others. We provide a software tool to assist with that. It is a growing interest.

Touch and multitouch are certainly here to stay. Where do you see this trend growing to with regards to musical instruments? What recent developments in this area do you find most resonating with your own ideas?

Multitouch displays are fairly new and not many companies use them in their products. So at this stage, aside from the Kitara, it seems the iPad/iPhone are the music interfaces people are using. I see this trend growing and eventually touchscreens will be used on everything.

But the biggest obstacle to overcome is the price. The touchpanel itself is made from layers of expensive glass, and then there is the cost of the graphical LCD and the drivers required to use it effectively. A fast MCU, a GPU, an OS and suddenly you have a computer.

There is a real trend at the moment for larger semiconductor companies like Atmel to release all in one microcontrollers with GPU on board, that specialise in touch. So touch technology is viewed as very important by the industry.

I see that Michael is a big fan of ZynAdddSubFX :) Do you follow development of free/open source synths much?