Libre Graphics Meeting, why it matters

It’s a month and a half till beginning of one of the most exciting events in the free software world, Libre Graphics Meeting 2010, that will take place May 27-30 in Brussels. Let’s talk about it.

If you’ve already read the LGM2010 announcement press-release, perhaps you’ve been wondering what impact exactly it has on the software projects involved, what impact it might have on your work through them, whether you should attend or, at least, financially support it. And, when it comes right down to it, what is it that free software developers actually do when they get together? 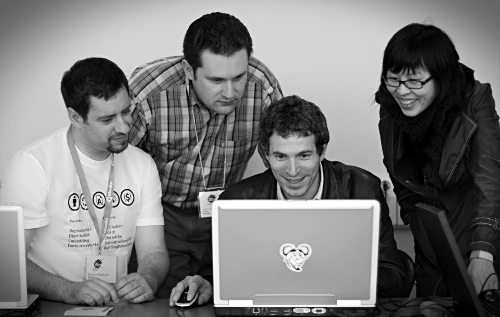 Traditionally it has been more of developers meeting than a user community event. However last year in Montreal there were two very important talks that have quite changed the future shape of the conference. I’m talking about “Ownership and standards: why designers are slow to adopt open source” by Ginger Coons and “Discussion about the impacts of design decision on software usage and adoption” by Benoit St-Andre. 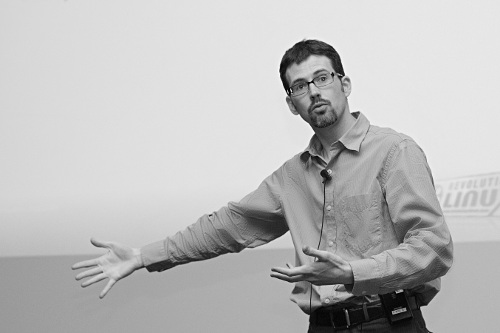 We’ve spoken to each other a little too much, perhaps, and now it’s time for you, our dear user community, to speak up. You have experience, you have vision, you have passion — come and share them!

So let’s talk about highlights of the conference. Here they are:

If you’ve been long enough in the free software world, you know that some kind of free-as-in-speech Creative Suite for Linux is not really possible, because every team (GIMP, Inkscape, Scribus etc.) is approaching state of matureness with different backgrounds, different visions and a whole lot of code that isn’t easy to be rewritten for a particular toolkit anyway.

However there are ways for these projects to converge, and these ways are:

Which is why we do BoF sessions since the very beginning as the best way to get developers of different projects to talk to each other and work out common strategies and solutions.

There is a number of achievements to name here.

The 2007 talk on Hugin resulted in development of LensFun library that is now used by several photography related applications for automatic/nearly-automatic fix of various lens distortions. Since very recently LensFun even has a rival library called Photoropter.

The 2007 talk on instrumented GIMP (more on it below) and adaptable interfaces is finally becoming some real code in upcoming Inkscape 0.48.

The 2008 talk on sK1 resulted in separating part of sK1 into a library called UniConverter that is now used by Inkscape and Scribus for opening a number of vector file formats including Corel DRAW files from v5 to X4. 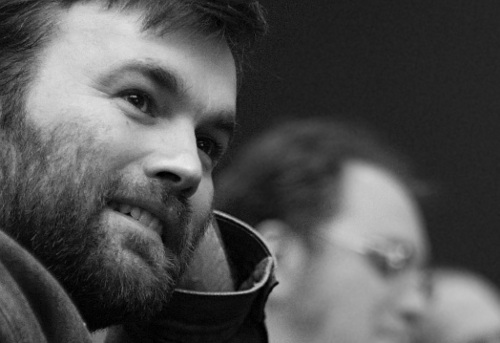 The reverse engineering efforts since then have reformed into the recently announced project called re-lab.

Besides thanks to collaborative work of several projects as part of OpenICC initiative there is a number of applications that implement xicc specification. Luckily, thanks to projects like GNOME Color Manager getting a fully color managed configuration on Linux is not a problem anymore.

The question of complex scripts support in free software has always been quite important. There is a number of advanced technologies now that aim to make free software accessible for ethnic minorities all around the globe. Achieving that goal would be rather difficult if it wasn’t for collaboration between major projects. This is how HarfBuzz came to life, for example. 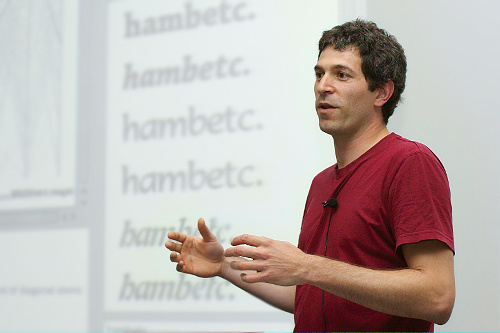 The annual Text Layout Summit is a variation of BoF sessions and already took place twice at LGM in the past (2008 and 2009). The most attended instance of TLS was perhaps in 2008 when we had people from Pango, Scribus, Fontmatrix, W3C,  Open Font Library and SIL there — that is, key text and scripts related projects and organizations in the free graphics software stack. We are hoping to organize new Text Layout Summit at LGM this year. Expect updates on that.

So the first project to name here is ingimp, or Instrumented GIMP. It’s an academic study of adaptable user interfaces based on solid statistical research. The team behind this project, lead by Michael Terry who is professor at University of Waterloo, created a so called instrumented version of GIMP that writes a log of user’s actions and sends it to a server for processing.

Why is it important? The team had analyzed about 5K of log files and figured out that just 11 commands in average out of hundreds available are typically used by GIMP users. It means that typically a user of a such a complex tool has to go through a lot of functions to reach the ones he really really needs. So the general idea is to build editable task sets — clusters of commands used for particular tasks.

The project was first presented in 2007 and subsequently updated in 2008 and 2009 as it progressed.

It’s not the only project coming from Michael Terry. Last year he rocked with kinematic templates and it scared the daylights out of impressed both GIMP and Inkscape developers quite a lot, so we might see something in the future there.

LGM is also a great place to present new interesting technologies. Last year there were two great presentation covering Panini, a rediscovered panorama projection based on works by Veduta artists of 17th century, and Lighttwist, a system to create 360 degree pano installations via immersive displays.

Another example is work of Krita developers on various digital painting technologies. In the past they were first to implement Kubelka-Munk color space for natural mixing of colors. This year Lukas Tvrdy is about to share his experience of writing brush engines for Krita. 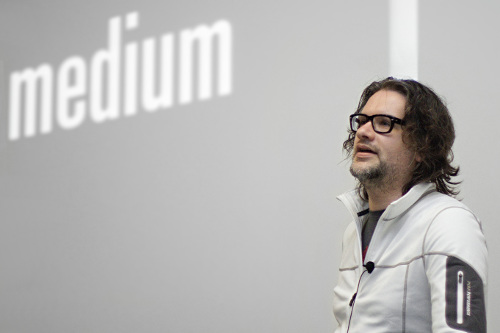 The mentioning of usability topic at LGM could never be justified without mentioning Peter Sikking’s talks on making GIMP usable. Thanks to his continuous work over the last few years GIMP developers have managed to make the application a much better tool. Most recently optional single-window mode and improved user interface for brush dynamics were introduced in the unstable development branch.

LGM has been big for standards in the past. We always had attendees from various W3C working groups who spoke about standards, how they evolve etc. I’m talking about Chris Lilley and Doug Shepers from SVG WG, and Liam R. Quin — XML Activity Lead at W3C. 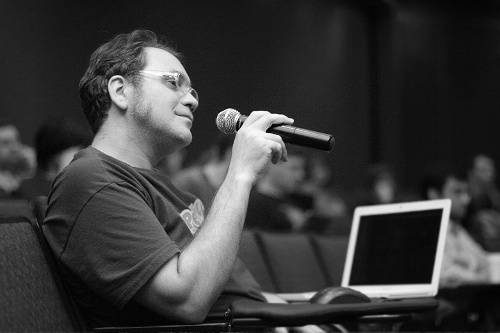 This year things are even more interesting, because the annual SVG working group face to face gettogether is arranged to be taking place same dates same place — Brussels, end of May. What’s more interesting is that their host is Microsoft who recently rejoined the SVG working group to implement support for SVG in upcoming IE9 (available beta already supports a subset of SVG 1.1. features).

We are still discussing what exactly interaction between SVG WG and LGM will look like. Still, if you are interested in talking to key persons in the WG, you wouldn’t possibly want to miss the conference. 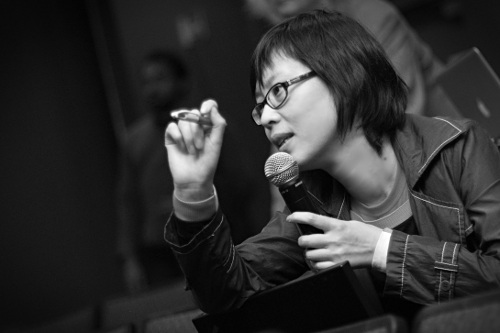 But apart from that LGM has its own achievements. The OpenRaster initiative that was started back in 2006 is now bearing fruits, albeit the standard itself is by no means complete.

Since not so long ago major open source players on the arena – Krita, GIMP and MyPaint — can open and save ORA files, which makes exchanging project multilayered files between them possible. Even more, MyPaint uses subset of ORA as native file format.

Development of ORA can be roughly divided into two stages: 1) Krita/GEGL collaboration, and 2) MyPaint’s invasion :) Jokes aside, MyPaint’s team has given a whole new drive to the project up to a point where one of MyPaint’s developers implemented a loader and saver of ORA files for GIMP. This year Martin Renold et al. are joining us at LGM, so we expect some further work on OpenRaster. This work might include libora reference library started by Luka Cehovin earlier this year.

Being far away from each other is quite typical for free software developers. If you ever met your team mates at any conference after talking to them over IRC and the like you do know how much things change to better.

Since 2007, when Gail Carmichael joined Inkscape team in Montreal, Libre Graphics Meeting has become a great venue for GSoC students to meet their mentors face to face. In 2008 Scribus team had a leading position in students. In 2009 the hugin/panotools team was more lucky than the rest of the organizations. In 2010? We’ll see!

If you are confirmed to participate in GSoC as a student for a graphics related organization and can travel to Brussels, have a look at the list of participants and check for familiar names :) If the organization members are not there, ask them if they would like to attend the conference. LGM will be right at the start of the cosing phase, and it will be a great opportunity for you to establish solid connection to your mentoring organization.

Is it just about graphics?

Only before 2009. Last year in Montreal there were two video editing related talks: “Video Editing with Blender for non 3D artists, using examples from real projects” by Bassam Kurdali and “PiTiVi: an overview of a FOSS video editor’s history and design” by Jean-Francois Fortin Tam. 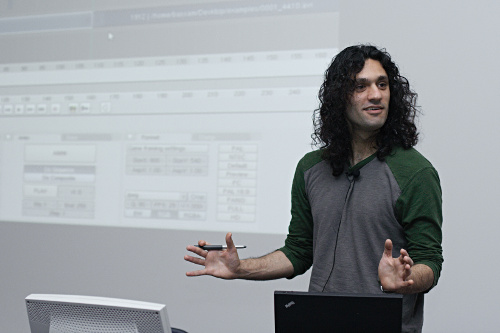 This year doesn’t look much different, because among proposed talks there is a LiVES demo.

What to expect this year

Now that you have an idea what LGM is about, you might be interested what exactly to expect this year.

We are still accepting talk proposals till May 1, so the schedule has not settled down yet. However you can have a look at the list of proposals and get a quite good idea about what to expect. 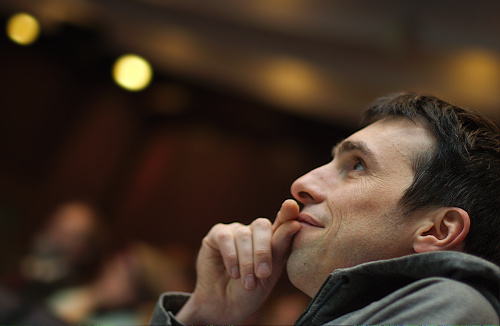 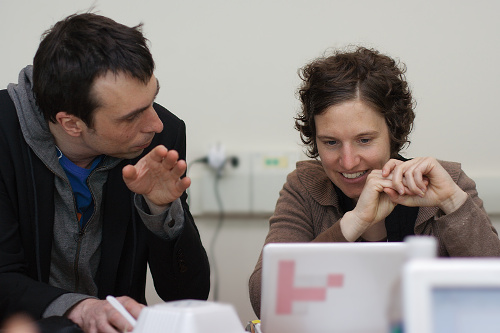 Another hot topic that is likely to evolve is web apps and cloud computing. It really isn’t something new for Libre Graphics Meeting. Fontly, a Spiro splines based on-line fonts editor was first introduced in its infant form back at LGM2007. And last year Jon Philips gave an interesting talk on web apps and the future of collaborative design.

If you can’t participate, you will be able to track progress of the conference via twitter and identi.ca. We’ll see if we can establish live video streaming. Please use either of the microblogs to keep track of the news regarding THE world’s event for developers and users of free graphics software.

And if you are willing to financially support the conference, please do it via our Pledgie campaign: